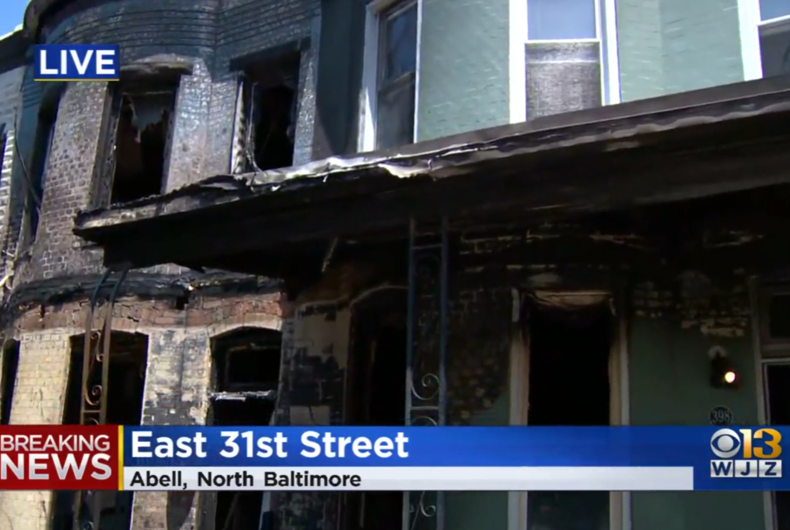 After a fire started when two Pride flags were set ablaze in Baltimore, three people were sent to the hospital and two are in critical condition.

Two individuals from one household and one from another were targeted after displaying Pride flags outside their homes. The fire was set in the morning when the individuals were sleeping in their homes.

Related: Someone stole a rainbow flag from an Ohio family’s porch & burned it

Not only were Pride flags destroyed but Pride décor was set on fire as well. The individuals from the two other homes were not injured during the fire.

Police Commissioner Michael Harrison told reporters that the case is still under investigation. However, Harrison is not ruling the fire out as arson nor a potential hate crime.

Although the fire was contained within 30 minutes, the three individuals were severely burned during the terrifying ordeal.

The victims include a 30-year-old woman and a 57-year-old man who are in critical condition, while a 74-year-old man is in serious condition. Fire Chief Niles Ford shared a statement about the condition of the victims.

“We pray for the three individuals that were hurt and seriously injured in this event, we pray for their health,” said Ford. “It is terrible whenever we have fires. I’m very thankful for the job that our members did.”

Not only are the individual victims of this horrific attack, but the neighborhood as a whole has been rocked by this terrible crime. Two of the homes a part of the fire received monumental damage, one of them isn’t salvageable as it was completely ruined.

The Bureau of Alcohol, Tobacco, Firearms, and Explosives will help in the investigation into what is being described as a “malicious burning.”

“We’re going to allow them time to do their work, as they always do in these instances, to make sure that we figure out what actually happened here so that we can move and accountability fashion in the best way possible,” Mayor Burns said.

He then called on residents to provide any information they might have to authorities.

Pride In Pictures: A family’s day at pride