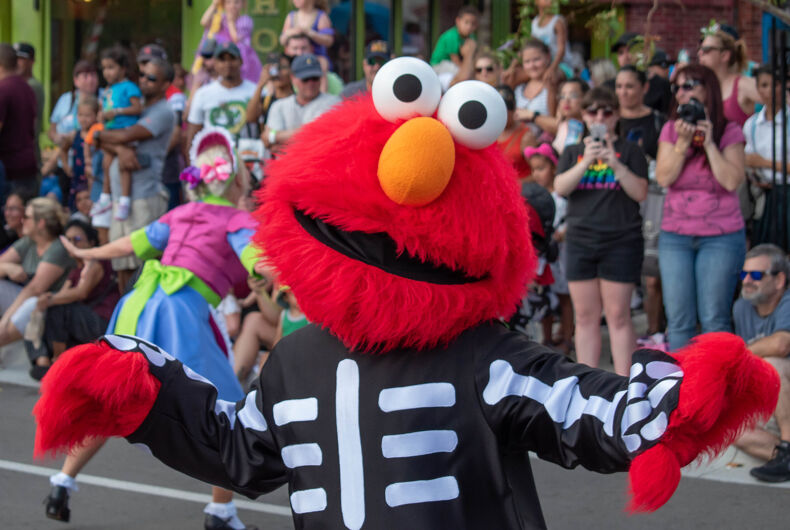 Sen. Ted Cruz (R-TX) isn’t afraid to step into a fight… with Muppets.

While the politician fled severe weather in his home state while thousands of residents endured freezing temperatures without electricity or heat, the stalwart conservative is more than happy to take a swing at Elmo because the puppet got vaccinated against COVID-19.

And this isn’t the first time Cruz has put on his boxing gloves to spar with a children’s puppet. Last year, he opted to take on Big Bird and handily lost that time as well.

Cruz’s ire was piqued by a video produced by Sesame Workshop, the nonprofit educational organization behind Sesame Street, in partnership with the CDC and the American Academy of Pediatrics. It is part of the show’s ongoing campaign to keep kids and parents safe during the coronavirus pandemic.

In the brief spot, available in both English and Spanish, the three-year-old red monster gets his coronavirus vaccine. The vaccine has now been approved for children under age five.

“I had a lot of questions about Elmo getting the covid vaccine. Was it safe? Was it the right decision? I talked to our pediatrician so I could make the right choice,” Elmo’s father, Louie, says to the camera.  “I learned that Elmo getting vaccinated is the best way to keep himself, our friends, neighbors and everyone else healthy and enjoying the things they love.”

He tells Elmo that he was “super duper” while getting his vaccine. Elmo says that the shot was “a little pinch, but it was okay.”

That was over-the-top for the attention-seeking Senator who said the puppet “aggressively advocate[d] for vaccinating children UNDER 5. You cite ZERO scientific evidence for this.”

Cruz’s last Muppet meltdown came after the character Big Bird tweeted that he had been given his COVID shot.

“I got the COVID-19 vaccine today!” Big Bird wrote. “My wing is feeling a little sore, but it’ll give my body an extra protective boost that keeps me and others healthy.”

Cruz was outraged, calling the tweet “government propaganda… for your 5 year old!”

The reaction to the senator’s swing at his second Muppet was widely mocked online with one user aptly asking, “Why is a US Senator watching Sesame Street instead of doing his job?”

Do you have better things to do than pick on Elmo?

He asks questions, because that pile of felt is smarter than you.

If you want scientific evidence regarding the vaccines, then you should have been supporting science from the beginning of the pandemic.

You know, @tedcruz, you might want to go somewhere other than Sesame Street for scientific evidence. You could try Elmo’s pediatrician, just like Elmo’s dad did.

Maybe if more of the @GOP "watched" Sesame Street perhaps some of the humility, empathy and humanity might be the real vaccination they need

Big Bird coming over to vaccinate your kids. pic.twitter.com/LQODCO3GKg