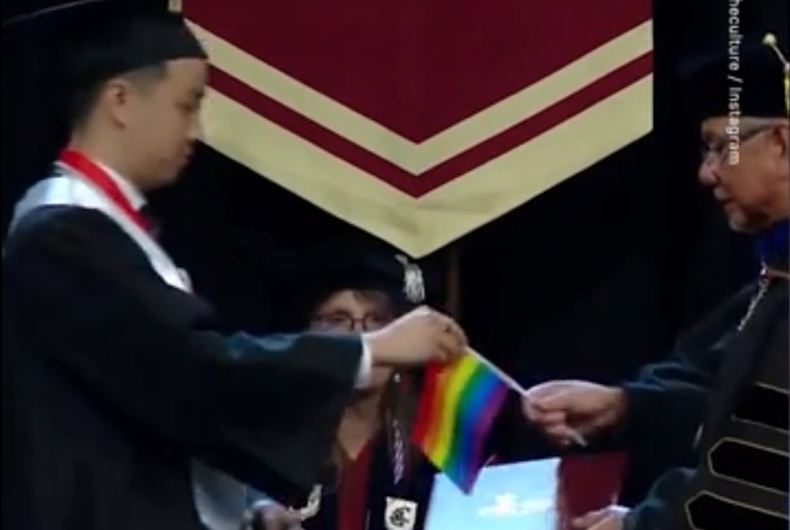 Students and alumni at Seattle Pacific University have been staging a sit-in for weeks, protesting the private Christian university’s policy banning employees from being gay.

The protest culminated with students handing rainbow flags to SPU President Pete Menjares in exchange for their diplomas at their graduation ceremony.

The protests came in response to a decision by SPU’s board of trustees in May not to change the school’s “Employee Lifestyle Expectations,” which bar employees from engaging in “sexual behavior that is inconsistent with the University’s understanding of Biblical standards.”

According to the policy, that includes same-sex sexual activity.

“Employees who engage in any of these activities may face disciplinary action up to and including termination of employment with the University,” the policy states.

“The board made a decision that it believed was most in line with the university’s mission and statement of faith and chose to have SPU remain in communion with its founding denomination, the Free Methodist Church USA, as a core part of its historical identity as a Christian university,” SPU board chair Cedric Davis said in a statement last month. The Free Methodist Church USA, which according to The Guardian has contributed $324,000 to the university, had threatened to cut ties with the school if the policy was changed.

A 2021 lawsuit brought by an SPU professor claiming the school had denied him tenure because he is gay was settled out of court. SPU’s faculty senate subsequently passed a vote of no confidence in the school’s board of trustees, which had upheld the anti-gay policy. In early June, the faculty senate passed a resolution in support of changing the policy to allow same-sex sexual activity within the context of marriage.

Summing up the protesters’ outrage, 22-year-old Leah Duff posed a question for SPU’s administration: “You’re going to charge me thousands of dollars every quarter to come here and to get an education, but you’re not going to provide me the education that I deserve as a queer person by having queer staff and faculty?” The Guardian reports. “You talk about being ecumenical, being so diverse. And it’s like, where is it?”

SPU student government president Laur Lugos says students plan to continue the sit-in well after graduation. As Lugos tells The Seattle Times, “Students have organized it and have been the ones putting it together, but the entire community is backing this and supporting this.”

How to get smarter & fight harder for LGBTQ rights