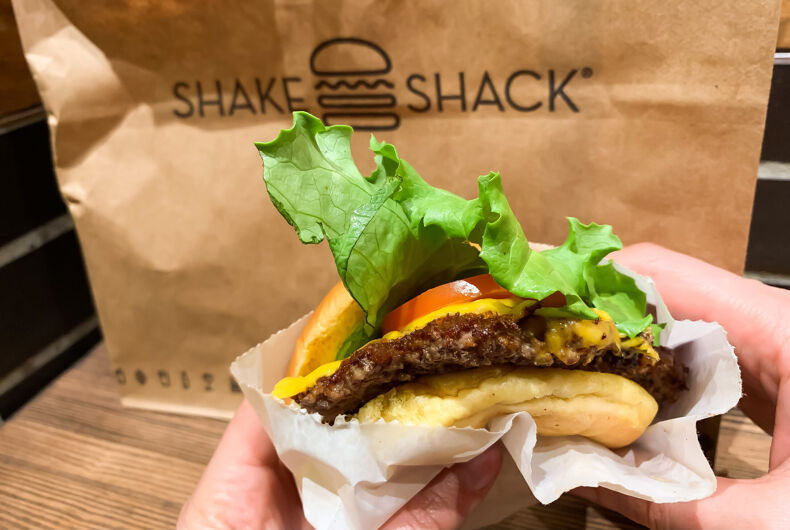 The international burger chain Shake Shack is facing blowback for its use of Martin’s Famous Potato Rolls, a burger bun created by a company that gave large donations to Republican Pennsylvania senator and gubernatorial candidate Doug Mastriano, an anti-LGBTQ Christian nationalist.

Martin’s, a family-owned business in Pennsylvania, has donated at least $114,000 to Mastriano’s gubernatorial campaign. As such, the bakery’s donation is the largest his campaign has received from any donor.  Mastriano’s wife works as a chaplain in Martin’s factory, according to his campaign website.

As a state senator, Mastriano has supported anti-LGBTQ bills including a bill that would ban transgender girls from playing on girls’ teams and a bill that would force trans people to use public bathrooms matching the gender they were assigned at birth. He has also endorsed legislation that would stop same-sex couples from adopting children.

His 2001 college thesis expressed also disgust for anyone who doesn’t hold the view that homosexuality is a form of “aberrant sexual conduct,” according to The Washington Post.

Even worse, his Christian nationalist views have compelled him to endorse extreme policies, including a total abortion ban that would not include exceptions for incest, rape, or a threat to the gestational parent’s life. He also supports mandating prayer in schools as well as increasing “school transparency” for parents and opposing so-called critical race theory — the latter two refer to a popular right-wing cancel culture bogeymen that allow parents to censor any classroom content mentioning LGBTQ identities or institutionalized racism.

Mastriano attended Trump’s “Stop the Steal” rally which occurred on January 6, 2021, and he was seen on video joining the rally’s march towards the U.S. Capitol, though he has denied being present for the murderous riots which occurred thereafter. Mastriano also reportedly spent thousands of dollars to rent charter buses to take people to the rally, The Post reported.

His campaign has also frequently repeated his belief in Christian nationalism, the idea that God ordained the U.S. as a Christian country. The belief is shared by Trump and other far-right Republicans including Rep. Marjorie Taylor Greene (R-GA).

“The forces of darkness are hitting us really hard right now,” Mastriano said in April to a crowd of supporters in a church parking lot. “We’re going to bring the state back to righteousness. This is our day, our hour, to take our state back and renew the blessings of America.”

Martin’s bakery is now facing boycotts by chefs and restaurants who once used their products.

Julie Martin, the social media manager of Martin’s bakery and a member of the Martin family, wrote in a statement, “We are aware of recent criticisms leveled against Martin’s and our business partners. Like the rest of the country, Martin’s employees, business partners, and customers hold to a diverse range of personal opinions, beliefs, and values. Although the stockholders who own the company are members of the same family, they also hold a wide range of views. For these reasons, the company, as a matter of policy, does not support any particular candidate or party.”

Considering the company’s donations to Mastriano, the last part of the statement seems untrue.

Shake Shack is also facing criticism for its use of Martin’s buns. Shake Shack’s use of the company’s buns in its over 360 worldwide restaurants definitely helped the bakery succeed and has encouraged even more restauranteurs to use Martin’s goods.

Shake Shack’s own website says, “We stand for something good and everything we do. That means carefully sourced premium ingredients; like-minded purveyors we admire and love; thoughtful, well-crafted responsible design for its place; and a deep commitment to community support through donations, events, and volunteering.”

Sensing growing public anger over its use of Martin’s products, Shake Shack’s brand and communications director Krysten Clark wrote, “In regards to the actions of individuals associated with the Martin’s company and their personal political donations, those are the choices of those individuals and do not express the values of Shake Shack. We continue to be in active conversations with Martin’s to express our concern.”

The company is currently promoting its partnership with the bun maker with a video entitled “Stand For Something Good.”