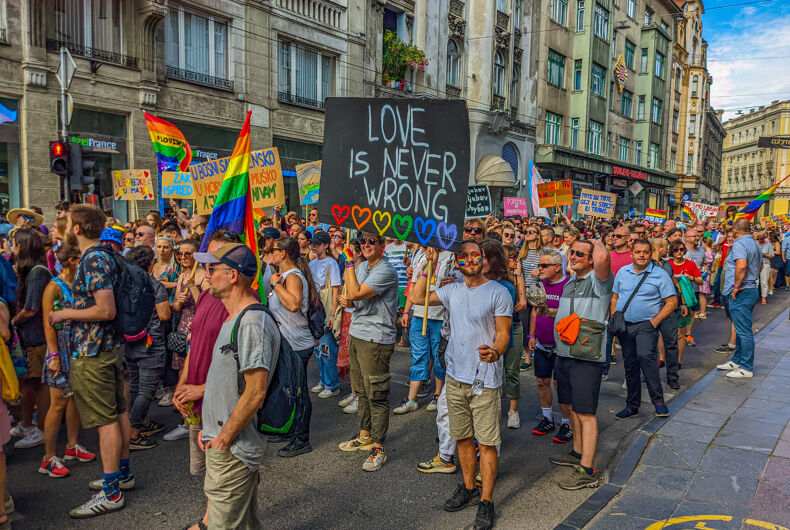 The presence of all of the police at Sarajevo Pride this past weekend here in Bosnia and Herzegovina didn’t come as a surprise to myself or my husband Brent.

This was only Bosnia’s third Pride event, and previous LGBTQ events have ended in unrest, due to opposition by some fundamentalist Christian and Muslim groups, as well as nationalist groups.

Related: A religious kook rushed the stage to scream at a drag queen. He didn’t get the response he expected.

What did surprise us? The presence of all of the young children with their parents.

The theme of this year’s Pride was “Family Gathering.” It was meant to remind Bosnians of the importance of family — and also that many LGBTQ people have families, and that many families have LGBTQ members even if they may not realize it.

There was still some controversy, including a small protest in opposition. Fortunately, that was held earlier in the day and on the other side of town.

And Povorka Pornosa, the group organizing this year’s Pride, received its share of harassing tweets and emails. One Sarajevo resident told me that many locals believed stories spread online that most of the two thousand Pride participants were paid and brought in from other western countries.

We got a taste of that homophobia here when I tweeted out a picture of us at Pride, along with a few words of congratulations. A local man promptly tweeted back, “sto vas nisu tukli jebem vam mater,” which translates to “they didn’t beat you motherfucker.”

(That was considerably better than last year when we were tear-gassed by the police during Pride in Istanbul, Türkiye.)

According to Povorka Pornosa, having Pride take place in Bosnia is incredibly important to LBGTQ Bosnians because:

Invisibility, isolation, lack of recognition, exclusion, and violence, in both the private and the public spheres, are the biggest problems for the LGBTIQ population in Bosnia and Herzegovina. Most LGBTIQ people decide against revealing their sexual orientation, gender identity, or sex characteristics to their families for fear of violence and rejection, which forces them to conceal a part of their life and the people they love. As LGBTIQ people, we are prevented from living openly and expressing our identities in public spaces—be it streets, workplaces, schools, institutions or cafes.

Given the obstacles faced by queer Bosnians, it was heartening that so many families — LGBTQ and straight — showed up to demonstrate their support.

Sarajevo currently has no gay bars (though it has some “friendly” ones), and local LGBTQ folks have told me it’s difficult to be fully out at work or to all family members.

But at least some in the local Muslim community are somewhat tolerant. One Imam even answered a question online about whether Muslims should be opposed to Pride or not by saying everyone deserves to be free to live their lives.

The local LGBTQ activist community is also celebrating the fact that a Bosnian court recently offered a pro-LGBTQ ruling on the Law on Prohibition of Discrimination, which was passed back in 2009 but has rarely been enforced.

No doubt these changes are taking place because of groups like Povorka Pornosa, as well as the two thousand brave souls who marched this year to demand equality for all Bosnian citizens.