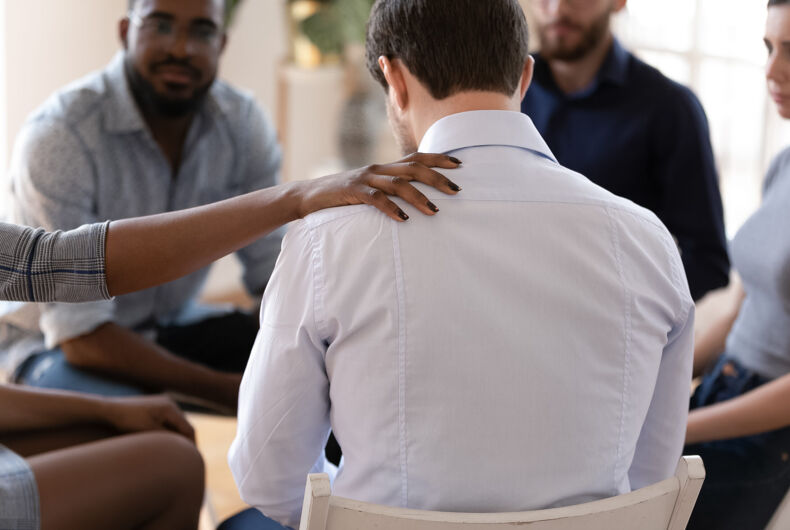 I learned many valuable lessons in rehab for meth back in 2003. Perhaps most notably, I discovered that my real problem wasn’t actually crystal meth. My real problem was Jay Lassiter and meth was just a symptom of my poorly managed life.

In rehab, I learned the tools to manage my life. Maybe they’ll help you too.

Related: These two traits can lead to an addiction to dating apps

Of all the things meth snatched away, I think I missed my appetite the most. I’d go days without eating and drinking, well-evidenced by my gaunt appearance.

Sitting there awaiting the intake process to enter rehab it dawned on me that I hadn’t had a proper meal in weeks and boy was I hungry.

Then I noticed a side table covered with little snacks laid out on a red gingham table cloth, presumably for an undernourished junkie like myself. There were saltines and graham crackers and peanut butter with little juice boxes to wash it all down. There were also tangerines neatly arranged, pyramid-style and I thought to myself that it must take practice to make such a perfect little pyramid of tangerines.

“May I have some?” I asked the intake nurse.

“Help yourself,” she replied, her broad smile a greenlight to snag an extra juice box for the long road ahead.

It was a simple gesture of kindness but that nurse’s hospitality landed like a thunderbolt. Never mind that I was 30 pounds underweight and severely dehydrated, she was nourishing me in more profound ways than that.

I’d spent a whole decade lying and stealing and manipulating my way through life and somewhere along the way, I forgot the magic of hospitality and grace. I’d forgotten that when we give others the opportunity to share their generous, gracious spirit they usually do.

Nearly 19 years later, whenever my rehab story comes up, people wanna know why did rehab work for me. They want the recipe for a successful detox and I wish it were that easy.

I won’t pretend that peanut butter crackers were my secret weapon to winning at rehab. But the grace and hospitality shown to me from the jump created a climate that gave me a better shot at success.

Hospitality is welcoming and helps build trust. Hospitality disarms. And that’s a valuable lesson in or out of rehab.

The intake process is long and includes tons of paperwork. They need to know your medical history and what meds you’re taking. They ask what’s your drug of choice and how long you’ve been using it. And since they’re feeding you for the next 28 days, they ask about dietary restrictions too.

This was before gluten-free was a thing and vegan options were slim but they still had a low sodium menu plus Kosher/Halal and vegetarian options.

Am I a vegetarian? No. Do I eat pork? Yes. Any food allergies? No, although I joked that my taste buds are allergic to cilantro.

For a hot second, vegetarianism crossed my mind, or at least skipping pork. Then I remembered that 24 hours ago I was sucking dick for drug money and maybe giving up meth and bacon at the same time was a lot to ask, especially since I actually like meat.

“No dietary restrictions,” I finally replied settling the matter.

Sometimes it pays to be picky. Sometimes we have to be. But usually with me, being picky was a control thing.

Rehab taught me what I needed to change. Not being gratuitously picky, basically going the path of least resistance, was one of them.

Life Comes At You Quickly

Yeah, a cliché but if you’ve ever done a stint in rehab you already know that life really does come at ya quickly.

When you’re off shooting meth for years on end, there’s no time for geopolitics or the latest grooming trends. So imagine my shock and horror when I started catching up on some of what I’d missed. It was early one morning, a few of us in the canteen waiting for breakfast when the cable news got my attention.

“After the break, we’ll chat with Governor Arnold Schwarzenegger about the war in Iraq,” the anchor teased. “Also, we’ll find out what happens when a Brazilian wax goes wrong.”

Did he say, Arnold Schwarzenegger? When did we go to war with Iraq? And WTF is a Brazilian wax? I must have said the last part aloud because the girl next to me didn’t miss a beat.

“You pour hot wax on your pussy then rip out your pubic hair with it,” she explained.

I almost fainted. When she saw the dumbstruck look on my face she tried to add context.

It was a lot for my meth-addled brain to process, especially the part about going bald down there. Ripping out my pubic hair with wax? Is this what life after meth has in store for me?

Before rehab, I was a ‘guns blazing’ kinda guy, and to be honest, I still can be.

If I needed something (or something was on my mind) I’d burst in and fire away without much regard for anyone on the receiving end of my bluster.

It’s important to never begin a sentence with the words “I need you to XYZ” because that’s an aggro posture that inevitably puts others on defense. Rhetorically speaking, it’s an unforced error.

In rehab I learned the magic of “got a second? I might need your help” and my life has never been the same.

Getting what you want (or need) depends on your approach. Inviting someone to help (“Got a sec? Is this a good time?”) works a lot better than telling them what you need them to do.

The impulse to lie comes from many different places. Sometimes we lie to deceive. Lies can be habitual or even pathological. My specialty was lying to entertain and amuse. For a long time, I didn’t think my actual story was worth a damn so I literally made shit up to give people the story I thought they deserved.

In rehab, I learned it’s never too late to stop bullshitting my way through life. And I learned that my truth is infinitely more compelling than my lies. And most importantly, I learned to use my battle scars to my advantage.

Being honest about my drug past and my HIV status gave my adult life purpose. My colorful backstory made me resilient and lent my voice power in the fight for things I care about like legalized weed, queer liberation, and clean needles to protect IV drug users from HIV.

And most importantly, be honest because your unvarnished truth, warts and all, is infinitely more interesting than your bullshit.

The world is filled with shitty, half-baked apologies. In rehab, they teach you how to do it right.

A good apology must include the following: 1) an expression of remorse and embarrassment 2) an acknowledgment of how you’d feel if the roles were reversed 3) your plan to never repeat the transgression and 4) a plea for forgiveness.

If you’re struggling to get the words out, “I owe you an apology” is a very good way to start.

Never use the word “if” when you apologize because trust me, you fucked up. No ifs, ands, or buts.

You’ll also need to manage your ego if forgiveness isn’t immediately forthcoming. Don’t forget that nobody owes you forgiveness.

That said, a proper apology usually does the trick.

Hypothetically speaking, let’s imagine your bestie slept with your (very recent) ex after the Coldplay concert. That’s a pretty huge transgression, no? Here’s how a proper apology for that might go:

“I’ve reflected on it and I owe you a colossal apology. Hooking up with your ex so soon after the break-up was appalling of me. I’m beyond mortified contemplating the damage I’ve done. That’s not how friends behave and I’m embarrassed and ashamed to have broken your trust. I’d be hurt and furious if the roles were reversed so it’s understandable if you can’t find forgiveness right now but hopefully someday you can. In the meantime, I’ve put myself on timeout while I grow up and learn to stop being such a selfish asshole.”

The perfect and truly humble apology can get you out of almost anything. And that’s perhaps the most powerful thing my time in rehab taught me.

Fixing a badly broken credit rating ain’t easy. But taking the first step is actually pretty straightforward. This is one of many life lessons I picked up in rehab that transformed my poorly-managed life.

We had three primary drug counselors at rehab including a guy named Frank, an ex-marine hardass with no time for any of our bullshit.

“You lack the tool to fix the mess you made and I’m gonna give you those tools,” was a common refrain.

By the time I landed in rehab, all my bills were in default including my student loan. I spent years ignoring my creditors’ letters and phone calls and honestly, fixing that mess seemed insurmountable. I had no idea how to start.

“Call them up and just be honest like we taught you,” Frank advised. “Be contrite! Tell them you’re broke and just got out of rehab and that you want to make this right. Tell them you can afford $10 a month to start and see how that goes.”

Turns out, that approach, being honest and driving their expectations down, worked pretty well.

My creditors were happy to hear from me and even though it was a very modest first step, making those calls lifted a burden I never realized I had. I didn’t have creditors chasing me down anymore and most importantly I didn’t feel like a deadbeat. Stepping up and doing what I’d long dreaded was actually empowering. And that made it a lot easier to press on.

It took two years to fix my credit and some of those months were harder than others. But honesty and a little contrition made the first step unexpectedly straightforward.

And that’s a valuable lesson for anyone feeling overwhelmed by debt, including folks who aren’t “lucky” enough to do a stint in rehab.

Stress Is Not An Excuse

I’m an early bird, at home and on the road. We’re talking 5 am most days. And whether I’m in DC or Miami or Dallas or closer to home in the  Philly burbs, when I’m out getting my hot tea and bagel, it’s hard not to notice the meth zombies out and about. And judging from all the Grindr profiles looking to p&p at 5 am on a random Tuesday, many of those meth users are gay.

The LGBTQ community still suffers greater degrees of basically everything that’s bad such as homelessness, poverty, and discrimination. We take more drugs as well.

According to the Center for American Progress, gay men are 12 times more likely to use meth than their heterosexual counterparts. LGBTQ people also consume more alcohol and cigarettes than the general population. It’s not hard to imagine why.

I wrote this hoping to share the best life hacks I picked up in rehab. Hopefully, I managed to destigmatize drug use and recovery along the way.

Jay Lassiter is an award-winning writer and podcaster based in Cherry Hill, NJ. He attributes his rehab success to good luck and impeccable timing. He’s never been to a Coldplay concert.

Life
fix your credit, going to rehab, how to apologize, meth addiction, what I learned

Judge tells Texas Attorney General to stay out of trans lawsuit. No one wants him there