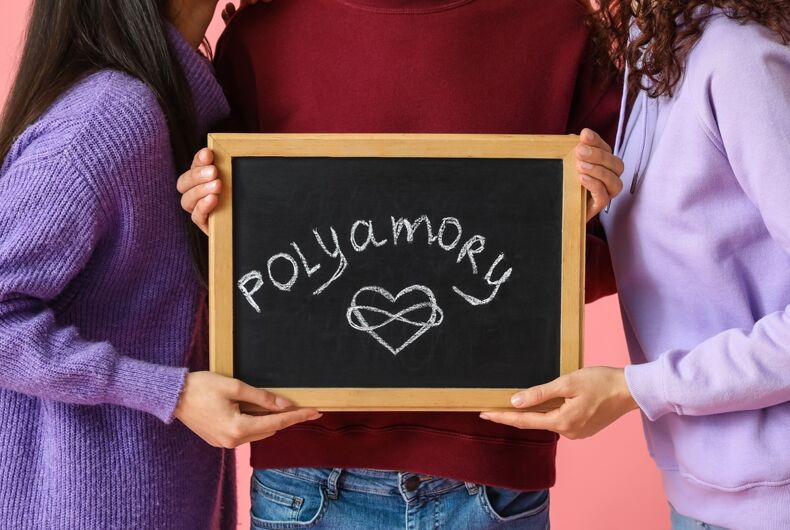 Polyamory is the practice of having multiple romantic relationships with the consent of all parties involved. It can be a beautiful way to experience love and connection, but it’s not always well understood.

One question people often have is what the polyamorous flag looks like, particularly because there are so many different versions out there. Here’s everything you need to know about this colorful – yet oft-debated – symbol of love!

Related: Am I polyamorous? How to know if polyamory is right for you

What Does It Mean To Be Polyamorous?

The Merriam-Webster dictionary defines “polyamory” as “the state or practice of having more than one open romantic relationship at a time”. The term is derived from the Greek term “poly”, which means “many”, and the Latin “amor”, which means “love”.

Polyamory is considered to be just one subset of ethical non-monogamy (ENM) – an approach to dating and relationships that involves dating, having sex, and partnering up with multiple people with the consent of their partner/s.

Consent is a major tenet of ENM, and it’s what differentiates the practice from cheating. In any type of ethically non-monogamous relationship, all parties have to enthusiastically consent to the dynamic for it to work.

What Is The Polyamory Pride Flag?

The polyamorous pride flag was created in 1995 by a man named Jim Evans. The flag is made up of a blue, red, and black stripe and the Greek letter “pi” in gold in the middle. Here’s what each element symbolizes:

Unfortunately, not everyone in the poly community is on board with this flag. According to the Poly in the Media blog, the flag can easily be mistaken for “some math or engineering society” rather than a pride flag, saying it “fails to declare for us, fails to inspire, fails to do a flag’s job.”

He said that he made it a point to avoid any symbols or imagery related to hearts. This is because the leather pride flag – which contains a heart – predates the polyamory pride flag and he didn’t want to bring any confusion between the two communities.

He also chose the pi symbol not only for its availability on most computer typographical platforms back then but also because he wanted a symbol that could be used “relatively anonymously, that could let people who were in on the symbology connect without it being too specific.”

It should be noted that, in the mid-90s, polyamory was still seen as fringe or even taboo. Not everyone who identified as polyamorous felt comfortable outing themselves to friends, family, and the general public.

Evans also acknowledged the long history of incorporating Greek letters and symbols as pride symbols. For example, the lambda was used as the symbol for the Gay Activists Alliance in New York and later became associated with the gay and lesbian rights movement in the 70s and 80s. Meanwhile, the labrys, a double-headed ax from Greek and Roman history, was adopted as a lesbian symbol and was used in one of the earliest examples of the lesbian pride flag.

In a bid to create a new polyamory flag that everyone in the community can agree with, various poly folks have uploaded their own versions online. Here are a few examples of flags that have been proposed to replace the polarizing original poly flag:

The poly flag created by Emma Essex (@HECKSCAPER on Twitter) in 2019 uses similar colors to the original flag made by Evans, only it features lighter colors and an infinity heart instead of the pi symbol. The infinity heart symbol has been adopted by the poly community since the 1990s, after Brian Crabtree created the first version and put it into the public domain.

@HECKSCAPER on here made this flag back in 2019 (which I think looks nice) but I haven’t seen very many people using it yet pic.twitter.com/8ly9jopCDz

In the center of the flag is a white infinity heart.

I created an updated version of the Polyamory Pride Flag. Read more about it on my blog! https://t.co/INzVUNQX6q#polyamory #polyampride #polyamorous #prideflag pic.twitter.com/hJfnm8Naf8

Polyamorous relationships come in all shapes and sizes, but they all share one common thread: love. Whether you are polyamorous or just curious about this way of life, we hope this article has given you a better understanding of what it means to be polyamorous.

The next time you see any version of the poly pride flag flying high, remember that it is a symbol of love and acceptance for everyone.