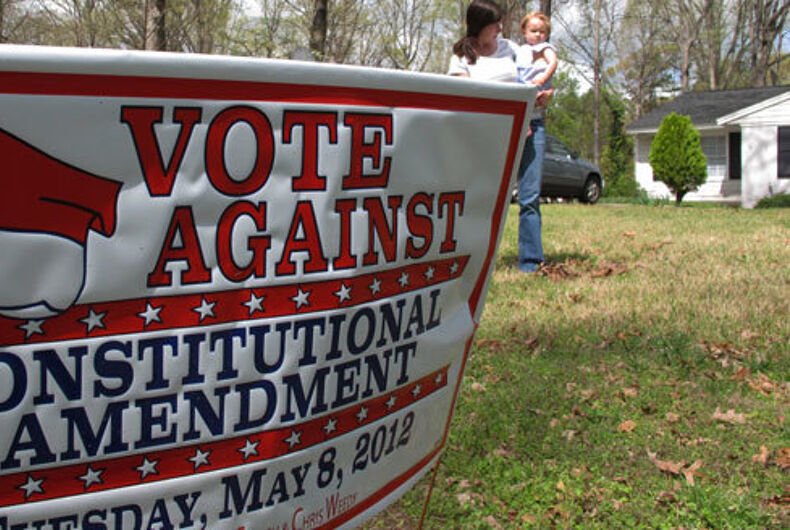 The Supreme Court’s decision to overturn a woman’s right to choose is a reminder that state and local penal codes are littered with lots of regulations rendered moot by court rulings. Like a filing cabinet that’s never cleaned out, these dead laws just sit there collecting dust, presumably never to be heard of again.

What the Supreme Court ruling highlights is that laws on the books are never entirely dead. Michigan, West Virginia, and Wisconsin all have old laws on the books banning abortion pre-dating the original Roe v. Wade decision in 1972. The states never got around to removing the laws and now are grappling with the possibility that the laws, dating back to 1882 in West Virginia’s case, will take effect.

Related: What we need this Pride Month is equal access to the ballot

That’s the prospect that will face the LGBTQ community if the Court decides to revisit any of the rights it had previously ensured. Given Clarence Thomas’ open invitation to correct “the error” that led to marriage equality and the end of sodomy laws, that’s not a remote possibility.

These laws and constitutional bans are ticking time bombs waiting to go off in the event that the Supreme Court takes its reasoning in Dobbs v. Jackson Women’s Health Organization to its logical conclusion. Indeed, in their dissent, the three liberal justices warned that the conservatives weren’t done with the damage they intend to cause.

While Thomas said that the ruling opened the door to other cases, the other justices in the majority tried to downplay that idea. Stephen Breyer, Elena Kagan, and Sonia Sotomayor would have none of it.

“Either the mass of the majority’s opinion is hypocrisy, or additional constitutional rights are under threat,” the dissenting justices wrote. “It is one or the other.”

In the meantime, the right-wing has a passive ally in moot–at least for now–laws that are still on the books. These laws are waiting in the wings to come back into full force should the right’s fantasy of eviscerating LGBTQ progress comes to fruition thanks to the ideologues on the Court.

During the fight for marriage equality, some 30 states passed constitutional amendments banning same-sex marriage in some form or another. Nevada voters repealed theirs in 2020. The rest are still on the books. There are also dozens of laws banning marriage equality as well.

Some states, like Virginia, have taken steps to strike those from the books, but Republicans have blocked efforts to repeal the constitutional amendment.  Legislators in other states have tried for years to get laws removed, but again failed in the face of GOP opposition.

Last week’s ruling made it clear that there’s no such thing as a secure right as long as the right-wing justices control the Court. If it seems far-fetched to consider the Court overturning tens of thousands of marriages, just consider the confirmation hearings for Breyer’s replacement, Ketanji Brown Jackson.

Republican Senators repeatedly pressed Jackson for her views about “unenumerated rights” like marriage equality. The clear message was that these rights were illegitimate. Given that the conservative justices on the Court are virtually indistinguishable from the GOP policy line–indeed, they were chosen for that very reason--there’s every reason to believe that they are thinking the same thing.

For the longest time, the fear was that the Court would slowly poke holes in LGBTQ rights by carving out broad exceptions based on a religious liberty argument. After Dobbs, it’s just as easy for them to cut right to the finish and eliminate the rights altogether. That’s the end game. As they’ve shown with abortion, why wait if you have the power to impose your views now?