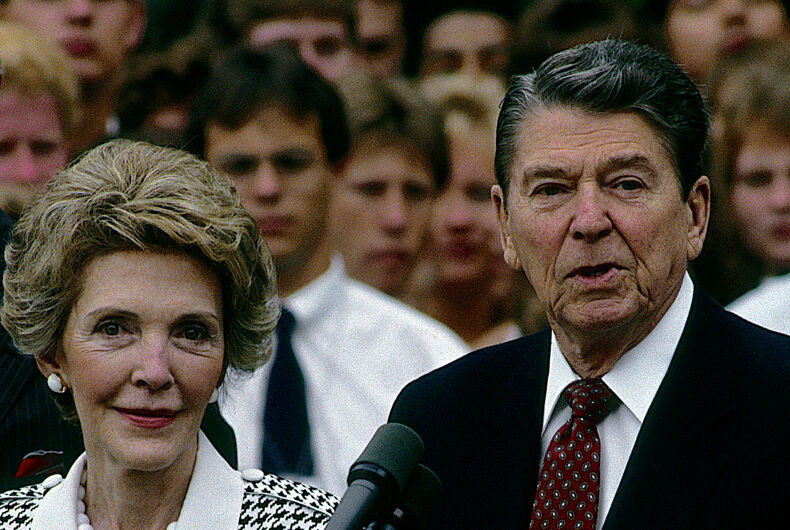 As the world celebrated the first day of Pride Month, First Lady Dr. Jill Biden announced that she would be unveiling a new stamp featuring embattled Postmaster General Louis DeJoy next week that features the former first lady.

Related: California Republicans wanted to honor Nancy Reagan for a year. This bi Democrat wasn’t on board.

The LGBTQ community was in shock and disgusted by the news, taking to Twitter to hold the White House accountable for ignoring Reagan’s link to the mistreatment and stigmatization of LGBTQ people during her time in office.

How to announce you have no LGBTQ people on staff. Announcing a stamp on the first day of pride for Nancy Reagan who participated in a genocide against gay men during the AIDS crisis. https://t.co/BJHMD2tCZv

we love our gay icons that announce and endorse nancy reagan, the wife of the president who intentionally made the AIDs epidemic worse pic.twitter.com/deFQjaasUX

announcing a nancy reagan stamp on the first day of pride month is sick lmao. like it’s not funny but everything is so fucked up where you’re just deliriously laughing and losing it

During their time in the White House, the Reagans were actively silent about the AIDS crisis. It would take nearly five years into Ronald Reagan’s term before he would even mention “AIDS” in public.

Nancy Reagan, who died in 2016, was said to have enormous sway over her husband and that she was good friends with famous actor Rock Hudson, who died from complications related to AIDS in 1985. And yet Hudson received no support from the Reagan administration.

Richard Socarides, a former White House advisor for President Bill Clinton, summed up the Reagan administration perfectly: “When the country needed leadership, President Reagan was not there, and his wife — who was able to do more — was not willing to step up. It reflects rather harshly on both of them.”

It wasn’t until after Hudson’s death that Ronald Reagan would finally speak on the AIDS epidemic, after being asked directly about it by a reporter. He was quoted as saying it was a “top priority” and tried to defend his silence as he claimed his administration had been supporting AIDS research for “more than four years.” There is no proof that Reagan actually supported AIDS research.

It would take six years after the first cases of AIDS was reported for the Centers for Disease Control and Prevention to roll out a public awareness campaign known as “America Responds to AIDS.” By then, over 47,000 people had been infected with HIV in the United States.

Dr. Biden will host a reception Monday to reveal the new stamp with Fred Ryan, the chairman of the board of trustees at the Ronald Reagan Presidential Foundation, and the Reagans’ niece Anne Peterson.