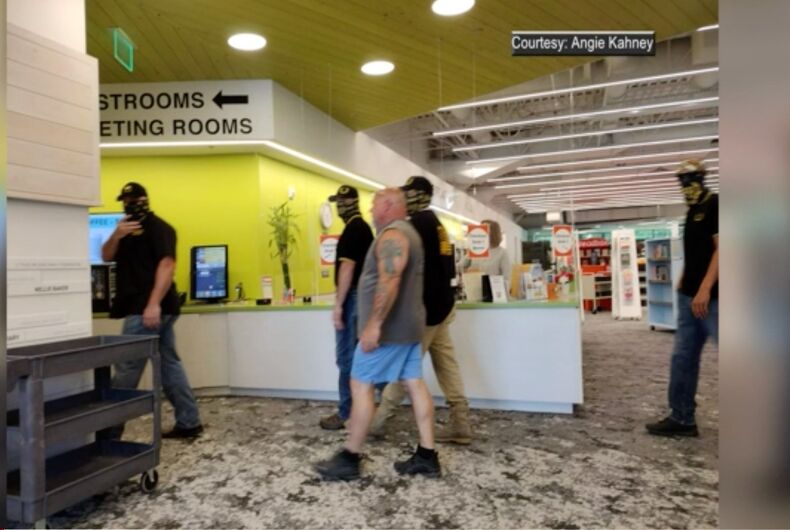 Members of the Cape Fear Proud Boys staged a demonstration outside a local library in Wilmington, N.C., on Tuesday where a Pride-themed storytime event was being held. The 15 masked men wearing the violent far-right group’s trademark black and yellow shirts were allowed into the library during the event by New Hanover County Sheriff’s Office deputies.

“I certainly felt like I was in danger when they entered the building,” Emily Jones, a parent who attended the event with her 17-month-old daughter, told Wilmington’s Star News Online.

According to a statement from the sheriff’s office, a deputy positioned himself between the demonstrators and the private room where four parents and six children under the age of seven had gathered for the event.

“The supervisor instructed the demonstrators that they were not allowed to enter the room,” the statement said. “At no time did Sheriff Deputies witness nor did any library staff report any of the demonstrators causing a disturbance within the library or try to enter the private room that was holding the reading. After the reading, all the participants left the library with no incident.”

New Hanover County’s chief diversity and equity officer Linda Thompson claims that the protesters did not enter the building until the Pride event had ended.

“Anyone from the public is permitted inside the building as long as they are not actively protesting or disturbing other patrons, based on the library’s code of conduct,” she said.

But witnesses dispute this account of the event. Several of the parents who attended have taken to Facebook, describing taunts and threats from demonstrators as deputies stood by. The deputies were overly friendly with the masked vigilantes, witnesses say, going so far as to fist bump the hate group members.

Jones reports seeing protesters in plain clothes holding signs that read “LGBT is grooming our kids” and “the library is responsible for child abuse” when she arrived. Once the Proud Boys members were allowed into the library, they reportedly stationed themselves outside the locked room where the event was taking place and shouted “Bring out the drag queens! Bring out the drag queens!”

“They yelled at me, they yelled at my kids. They told my kids they were going to hell,” another parent who wished to remain anonymous told Wilmington’s WWAY 3. “They told me I was a child abuser, they quoted scripture. We were escorted inside by a library employee”

In a Facebook post, Angie Smith Kahney writes that she saw officers “escort the Proud Boys and their klan into the building straight to the room where children as young as 1 were with their parents, while they shouted obscenities and threats.”

Earlier this month, the Anti-Defamation League linked the recent spate of far-right extremist groups targeting Pride events to both racist and anti-LGBTQ rhetoric that has proliferated online. The ADL Center on Extremism reported seven incidents of far-right groups targeting the LGBTQ community during the weekend of June 11–12 alone. The demonstrations and disruptions are “fueled in part by the claim that members of the LGBTQ+ community are pedophiles who are “grooming” children.”

“Some white supremacists, meanwhile, associate antisemitic and racist conspiracy theories like the Great Replacement with the LGBTQ+ community,” the report continues, “alleging that LGBTQ+ culture and pedophilia are promoted by elites to encourage lower white birthrates in order to ‘replace’ the white population with Black and Brown people.”