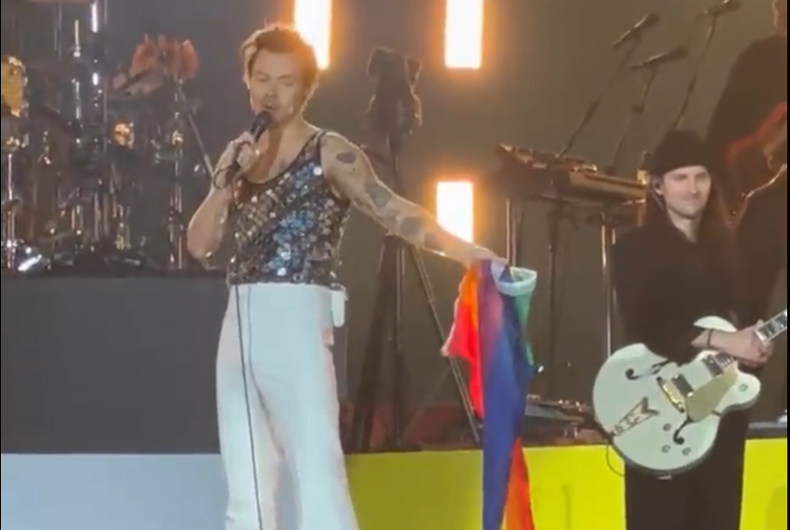 It turns out that coming out in the presence of Harry Styles is the latest fashion. During Styles’ show on Sunday at Wembley Stadium, the gender-bending music artist helped a fan come out in front of the entire audience after spotting him holding up a sign asking for Styles’ help.

The “As It Was” singer is shown on Twitter pausing during sets to grab the fan’s sign and a rainbow flag before running across the stage with the flag over his head proclaiming that his fan is a free man.

The Italian fan was first spotted by Styles during a break in his concert set when he held up a sign saying, “From Ono to Wembley: Help me come out.” After seeing the sign, Styles did just that by holding up the sign and grabbing a rainbow flag in the audience.

Styles acted like pure royalty with his proclamation after grabbing the sign and flag. He immediately spoke to the audience who began chanting the fan’s name. Styles then said, “When this flag goes over my head, you are officially out. I think that’s how it works: When this sign goes over the head, you’re officially gay, my boy.”

Styles then rushed across the stage, holding the flag above his head as he ran. The pure joy in Styles’ actions could be seen on his face as he made his fan’s wish come true.

The exuberance extended to the audience who were overjoyed. After running across the stage, Styles then announced to his fan, “Congratulations, you’re a free man!”

This isn’t the first time Styles has helped a fan come out during one of his concerts.

Styles is known for making his concerts safe, inclusive spaces for all fans to be themselves, and he’s showing no signs of that changing.

In 2021, his Love On Tour show finally took to the road after being postponed due to the pandemic. While on stage, he was frequently seen dancing with rainbow, lesbian, bisexual, transgender, pansexual, and Black Lives Matter flags. He also gave several speeches that encouraged audience members to do what makes them happiest and to be their truest selves.

One of his most powerful moments, however, was when he helped a gay fan come out to her mom.

A fan named McKinley attended his show in Milwaukee with a sign that read: “My mom is in section 201. Help me come out?”

The “Watermelon Sugar” hitmaker said: “What would you like me to tell your mother?” before shouting “Lisa, she’s gay!” to her mom and the thousands of cheering fans in the venue.

McKinley said his loving act “meant the world” to her, and he’s someone who “feels like safety” to her.

Mom Lisa was also emotional afterward and shared: “I feel really blessed and very honored to have been in that moment. It’s very rare that you get to have these once-in-a-lifetime experiences, so I’m very honored and blessed that I was able to be a part of it.”

Also, back in 2019, while performing in San Jose, Texas, the former One Direction member noticed a sign in the audience that said, “I’m going to come out to my parents because of you.”

Styles read the sign and talked to the fan, whose name is Grace. He asked for her mother’s name, and then shouted into the mic, “Tina, she’s gay.”

@Harry_Styles Thank you so much for creating an environment where I am proud to be who I am. Your continuous support of the LGBTQ+ has helped me come to love myself and feel safe. Thank you for tonight and I can’t wait to show Tina (my mom) this video. Love you always. pic.twitter.com/Kk5FJVYemB