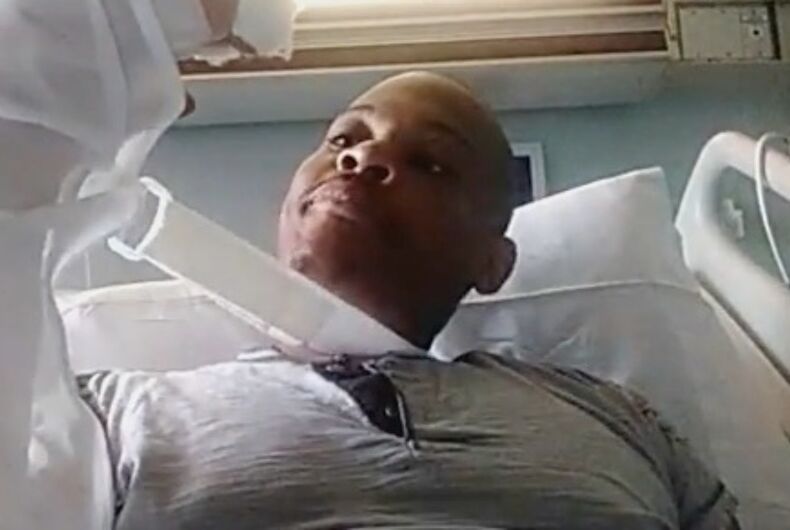 New York City police have arrested 52-year-old Runadieo Jordan as the suspect in a homophobic stabbing that occurred June 1st on a subway train. Jordan now faces hate crime charges and could be put away for decades, if convicted.

Jordan allegedly stabbed 31-year-old Tavon Silver when Silver was aboard a train with his fiancé. Jordan cut Silver’s wrist to the bone and said a homophobic slur to him as he lay bleeding and losing consciousness. Silver now says that he wants even more gay people to ride the subway to show that they won’t be intimidated by such attacks.

Related: New York City insurance bans gay couples from having kids, so a gay couple is fighting back

Police arrested Jordan on the evening of Friday, June 3, after recognizing him from a wanted poster that showed his image taken from video camera footage the day of the attack.

“This arrest removed another weapon from the transit system,” Metro Transit Authority (MTA) Chief Safety and Security Officer Patrick Warren said in a statement. “We have repeatedly said that it is a priority to stop bad actors before they can commit crimes against other New Yorkers.”

Silver was reportedly playing music loudly in a subway car near 1 a.m. local time on June 1 when Jordan entered the train car and yelled a homophobic slur at the couple, WNYW reported. Later, as the train pulled into a Bronx station, Jordan allegedly shouted at Silver and then stabbed him in his right arm.

“Next thing I know, like, I had a hole in my arm. Like blood was gushing everywhere,” Silver told the aforementioned news station. “It was one straight cut, and he took a giant chunk of my wrist. He literally cut my wrist off. So, like, if you look straight through, you can see my bone.”

“He came walking by us as I was losing consciousness on the floor, bleeding out,” Silver added. “And he just walked right by us, and he was like, ‘Here you go, you stupid [homophobic slur].'”

Jordan reportedly ran off while Silver was taken by emergency services to the Lincoln Medical Center. Jordan has since regained feeling in his fingers and is just happy to be alive. He also said that he doesn’t want the attack to discourage gay people from riding the subway.

Silver is facing two charges of assault as a hate crime, criminal possession of a weapon, and aggravated harassment as a hate crime. If convicted, he could face decades in prison.

Hate crimes in New York City have increased by 76 percent between the first quarters of 2021 and 2022, the New York Police Department Hate Crimes Task Force reported. Anti-gay hate crimes increased by 12 percent during the same period.

A March report found that a majority of hate crime charges in the city usually get pleaded down or dropped entirely by the time of conviction.