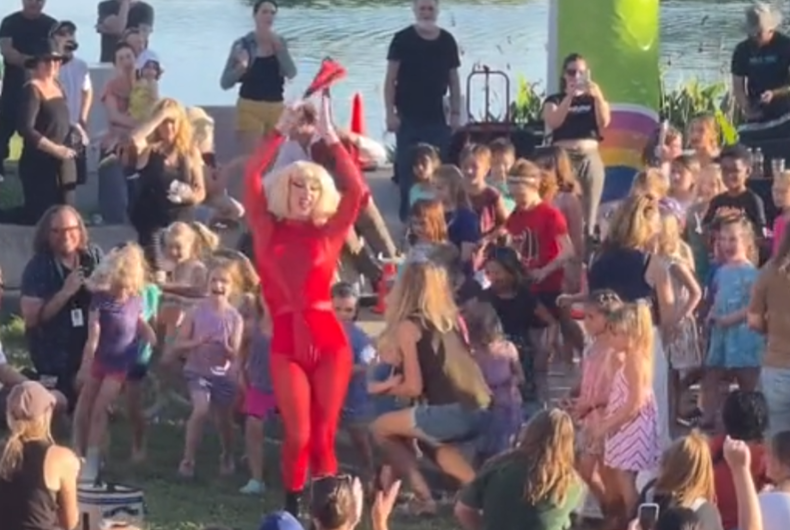 A video of a drag queen leading children through a crowd has gone viral amidst a resurgence of outrage from conservatives about drag queens interacting with children.

In the video – which appears to have been taken in Austin, Texas – a drag queen in a red bodysuit lip-synchs to Lady Gaga’s “Applause” as children follow her through the crowd, having fun.

Related: Lil Nas X calls out homophobia after getting snubbed by BET Awards

The video of the drag queen walking children in nature was posted to TikTok this week by Extragrams, a drag telegram service. The video has already been viewed over 430,000 times, and it’s not hard to see why.

“THE FUTURE IS DRAG,” one person commented on TikTok.

“THIS IS SO IMPORTANT! This makes me so happy!!” said another.

The video was then posted to Twitter, where it has been viewed nearly 900,000 times.

“protect it at all costs!” wrote the user who posted the clip to Twitter. They were referring to the idea of kids being allowed to have fun with drag performers, something that conservatives have spent the first part of the week attacking since a gay bar in Dallas got protested for hosting a family-friendly drag event.

Online, rightwingers said that it was inappropriate for children to be in the same building as the fully-clothed drag queens, comparing queens wearing inches of padding, numerous foundational garments, and full gowns to strippers.

Conservatives probably think this is grooming or something.

What Sondheim taught us about gun violence