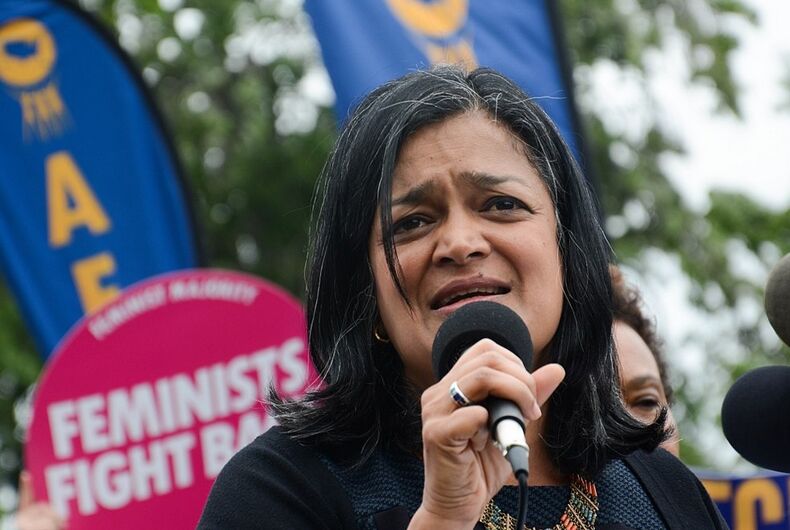 As Republican attacks on transgender people continue nationwide, five Democratic House representatives have introduced a Transgender Bill of Rights that would protect trans and non-binary people.

The bill would ban discrimination against gender identity and expression in public accommodations, employment, housing, and credit. The bill would also ensure access to gender-affirming medical care — including abortion and contraception — and would ban forced surgery on intersex children and infants. Intersex individuals are often subject to unnecessary genital surgeries before they can provide informed consent.

The bill would ban so-called “conversion therapy,” the pseudoscientific form of mental torture that purports to turn trans and non-binary people cisgender. The bill would also invest in community services to prevent anti-trans and anti-nonbinary violence as well as mental health services to assist survivors of violence and other community members.

Last, the bill would require the U.S. attorney general to designate a liaison within the Department of Justice’s Civil Rights Division to enforce the civil rights of transgender people.

The bill was introduced by Democratic Representatives Pramila Jayapal (WA), David Cicilline (RI), Marie Newman (IL), Mark Takano (CA), and Ritchie Torres (NY). Cicilline, Takano, and Torres are out as gay. Newman, who just lost her primary election to a moderate, has a transgender daughter, and Jayapal has a non-binary child. The bill has 83 co-sponsors.

Between January and May of 2022, Republicans in state legislatures across the country introduced more than 300 anti-LGBTQ bills, most of them targeting transgender youth, Takano said. Many of the anti-trans bills try to block youth access to sports, school sports and gender-affirming care — all of which can increase mental distress and suicidal ideation among trans people.

“Our transgender and non-binary siblings are hurting,” said Cicilline, Chair of the Congressional LGBTQ+ Equality Caucus. “Across the country, radical right-wing Republicans have introduced hundreds of bills attacking the LGBTQ+ community — particularly transgender and nonbinary youth — to score political points…. As Members of Congress we need to not just condemn these efforts but also put forward a vision of what equality truly looks like.”

Newman said, “The ability for trans folks to live free from discrimination is quite literally a life-and-death issue. This legislation is especially crucial right now, as right-wing extremists have grown increasingly vicious and targeted in their harassment of transgender Americans, both through the legislative process and outside of it.”

While the bill is unlikely to find the 10 Republican senators necessary to bypass the chamber’s filibuster, it still provides a roadmap for other states, cities, and organizations looking to protect trans and non-binary people’s civil rights.