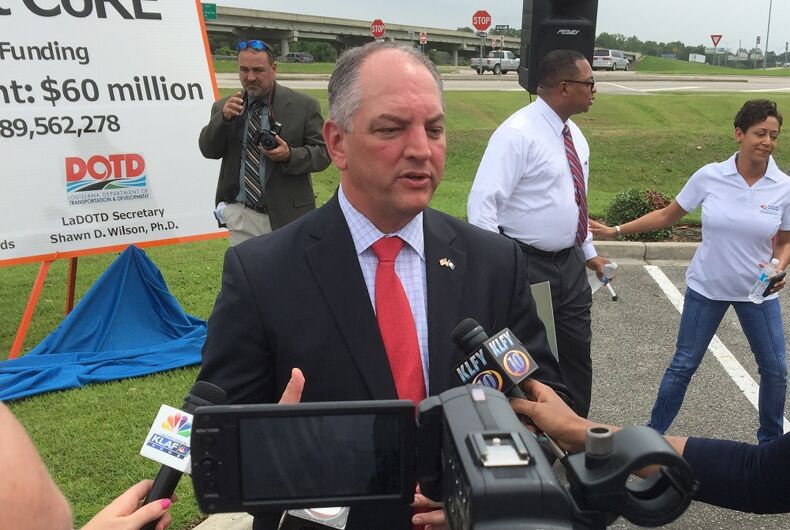 Louisiana Gov. John Bel Edwards (D) says that he’s not going to veto a bill banning transgender students from participating in school sports. If he doesn’t veto it or sign it, it will automatically become law.

Edwards stressed that he opposed the bill – he called it “unfortunate” that it will pass – but said that the legislature likely has the votes necessary to override his veto so there’s no point in setting up that fight.

The bill would ban transgender girls from participating in school sports as their gender, effectively banning them since playing on a boys’ team isn’t a real option.

A similar bill was passed last year and Edwards vetoed it then, calling it “unnecessary” and “just plain mean” at the time. The state senate voted to override his veto, but the state house didn’t have the votes necessary.

But the bill got changed this year, taking out a section of the bill that also banned transgender girls and women from playing intramural sports. With that part gone, Edwards said there are enough Democratic lawmakers who will vote to override his veto.

“Senate Bill 44 was going to become law whether I signed it or not,” he said at a press conference. “I think that’s unfortunate, but that it is where we are, and I hope we can all get to a point soon where we realize that these young people are doing the very best that they can to survive.”

“We shouldn’t pretend that there is unfairness when there’s not,” Edwards said, adding that the rightwing fears that transgender girls and women will take over sports is “not happening in Louisiana.”