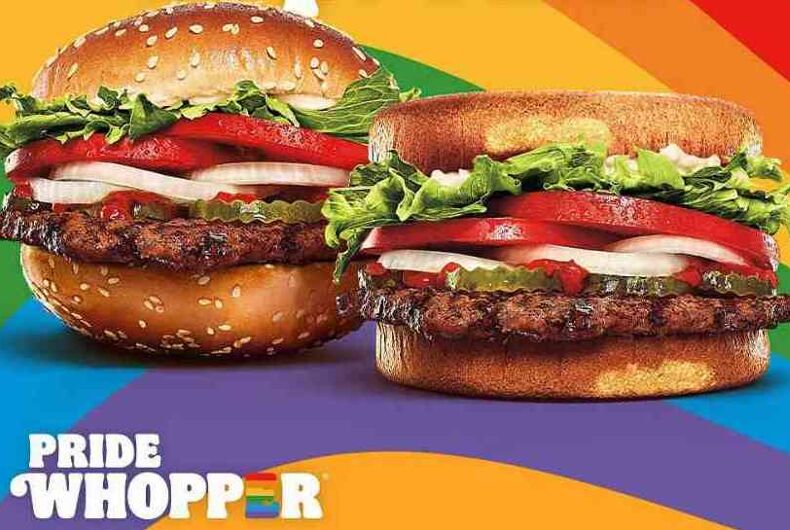 Burger King Austria has introduced a Pride Whopper for Pride Month featuring “two equal buns for equal love and equal rights.” But the effort has some social media users laughing.

Various social media commenters have joked that, by selling a product that features “two tops” or “two bottoms,” the fast-food company doesn’t understand how gay sex works, but all burgers in Austria are actually served with two top or two bottom buns. (Okay, not really.)

Burger King Austria unveiled the burger in a June 1 Instagram post stating that the “equal buns for equal love and equal rights … set an example for the equality of all identities and sexual orientations.”

“A little twist meant to put a smile on our faces and remind us to treat each other with respect and peace, no matter who you are and who you love,” the post read, adding the hashtag #TimeToBeProud.

The burger is available in Austria until June 20.

This isn’t the first time that Burger King has recognized its LGBTQ customers.

In 2014, a San Francisco Burger King location sold a “Proud Whopper.” The burger was actually just a regular Whopper that came wrapped in rainbow paper with the words, “We are all the same inside,” written on its inside. The burger garnered praise from some LGBTQ diners and scorn from right-wingers.

During Spirit Day 2017 — the anti-bullying day started by the LGBT entertainment and media watchdog GLAAD —  Burger King released a short video. In 2019, the company released an ad showing how they burned down a Whopper burger and reformed the ash into a diamond used in a gay couple’s wedding.

In 2020, Burger King Mexico changed its logo to a rainbow-colored “Burger Queer” to honor Pride month. The Mexican brand changed its Facebook and Twitter as well as its French fry and sandwich boxes for the promotion. Customers who purchased a combo meal received a Pride crown and “a special surprise,” the company tweeted, adding, “Let’s celebrate love, because we are all the same inside.”

The same year, the company released an ad in Helsinki, Finland showing the Burger King kissing his fast-food rival Ronald McDonald.  The poster ads included the tagline, “Love Conquers All.”