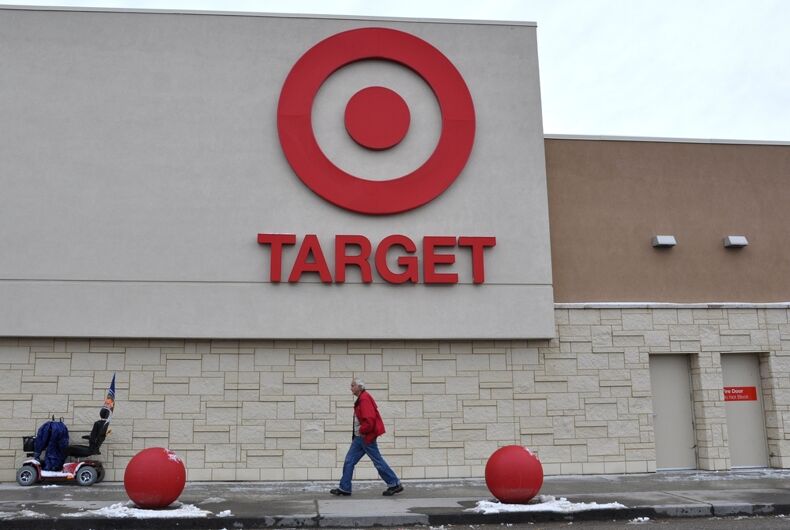 A Reddit user posted a photo of a vulgar sticker found inside a children’s book for sale in a Target store in Kalispell, Montana. The anti-LGBTQ sticker includes a “fact” about homosexuals that isn’t true.

The user said in their post that three stickers were discovered when a customer purchased three books. All of them included the stickers.

“NOTHING TO BE PROUD OF” the sticker proclaims in all caps at the top. “78% OF HOMOSEXUALS HAVE STDS (SEXUALLY TRANSMITTED DISEASES)” the sticker continues.

To make sure customers are crystal clear about the cowardly vandal’s intent, the sticker is adorned with a rainbow and clipart of a man with a beard wearing a pink skirt with a rainbow-colored top and opera gloves. They were found stuck inside the front cover.

“We’re in a pretty conservative community that’s still a decade behind the times,” an employee who asked to stay anonymous told LGBTQ Nation. “Our team consists of some amazing LGBTQ people and we still get plenty of dirty looks and Karens wanting to see the managers just for us wearing our Pride shirts.”

Target spokesperson Brian Harper-Tibaldo said that the company is taking the incident seriously.

“We share our guest’s concerns about this inappropriate message, and our security team is actively investigating,” he told LGBTQ Nation. “We encourage any guests who may have received this message to share their experience by calling Target Guest Relations at 1-800-440-0680.”

Evangelical churches frequently leave similar stickers or literature inside of books in libraries or retail outlets. They also leave the tracts in place of tips if they realize their server is part of the LGBTQ community; most look like fake cash meant to fool the server into picking it up. The pamphlets or notes exhort queer people to “repent” and miraculously turn cisgender or heterosexual. The churches frequently jumble gender identity and sexual orientation together.

Last year, a Maine-based TikTok star raised over $10,000 for the LGBTQ community in honor of a gay waiter who was discriminated against by people he was serving at a restaurant.

“As a general life rule I try not to make videos when I’m angry,” she said in the video posted during Pride month, “but if you can’t tell by my chest right now I’m fuming.”

She went on to explain that she has worked in restaurants for fifteen years and could not believe what had happened.

“I don’t care who your God is,” she said. “If you do that, you’re an asshole. And you can justify it however you want, but it’s not in your book.”

A gay couple walking down the street in Manhattan in early 2021 noticed two women posting vulgar stickers denigrating transgender people and quickly acted to confront the two. One of the men filmed the encounter and it quickly made national news.

The stickers said, “Transwomen [sic] are men and most have a penis.”

This story has been updated to include a response from Target that wasn’t received until after publication.