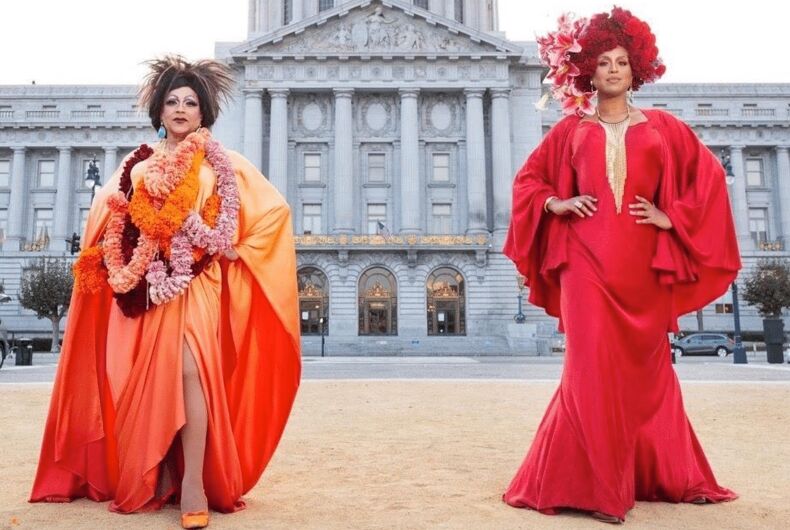 The new breed of Republicans has taken a page out of the party’s mid-80s political playbook in an attempt to paint LGBTQ people as “groomers” and child predators. Since Americans have long since realized that gay men are not child molesters (straight men have the highest incidence of child abuse), the GOP has tweaked the formula.

This time around its transgender women and drag queens that they’re demonizing. But before drag queens became punching bags for Trump supporters, Republicans loved drag. Here are five times the GOP loved drag – including Donald Trump himself.

Related: Dad threatened to “show up & kill somebody” if drag queens performed in his kid’s school

With so many Republicans stuck in the last century, they all grew up watching Bugs and his pals cheat death, taunt their enemies, and dress in drag. Sadly, while they seem to have forgotten all the laughs they had with the bunny in drag, they’re keen to remember the racist and sexist stereotypes the old cartoons embraced.

Republican Arizona gubernatorial candidate Kari Lake recently insinuated that drag queens and queer people are a threat to children. But a local drag queen reminded the right-wing politicians that she once brought her own kid to a drag performance. In response, Richard Stevens — an entertainer who performs as drag queen Barbra Seville — said that Lake has repeatedly attended his performances. Stevens also said he performed at a party that Lake attended with her own children.

In social media posts, Stevens called Lake “a complete hypocrite,” adding that the two were friends before Lake became a right-wing politician.

“She’s friends with drag queens,” Stevens said. “She’s had her kid in front of a drag queen. I’ve done drag in her home for her friends and family. She’s not threatened by them. She would come to shows constantly. To make me be the bogeyman for political gain, it was just too much.”

A Republican mayor in Georgia who helped raised a quarter of a million dollars to help Alzheimer’s patients with a drag performance responded to critics who thought dressing in drag was beneath his office. Kennesaw Mayor Derek Easterling hit the stage at Buckhead Theatre in Atlanta, impersonating Christina Aguilera for the charity event Battle of the Brain, hosted by Daughters Against Alzheimer’s Association. He and nine other competitors helped bring in $250,000 to make life better for those suffering with a serious illness.

Michael Ertel had been in office for a few weeks before pictures of him dressed as a “Katrina victim” at a 2005 Halloween party were leaked to the Tallahassee Democrat. In the pictures, Ertel is wearing black makeup and red lipstick, as well as fake breasts, earrings, and a New Orleans Saints bandana around his head. Not only did Ertel dress in drag, but he also added in blackface, the derogatory and racist vestige of vaudeville entertainment.

Appointed by Gov. Ron DeSantis (R), Ertel quit before the Governor waged war on the LGBTQ community. He didn’t resign because he was in drag in the photos; he left office over the blackface.

Before Donald Trump became president and Rudy Guiliani turned into a deranged conspiracy theorist determined to overthrow democracy, the two had a grand old time playing dress up.

The former New York City mayor dressed in drag for a charity event. Trump, never a paragon of virtue, made sure to bury his face in Guiliani’s fake breasts and gave him a motorboat.