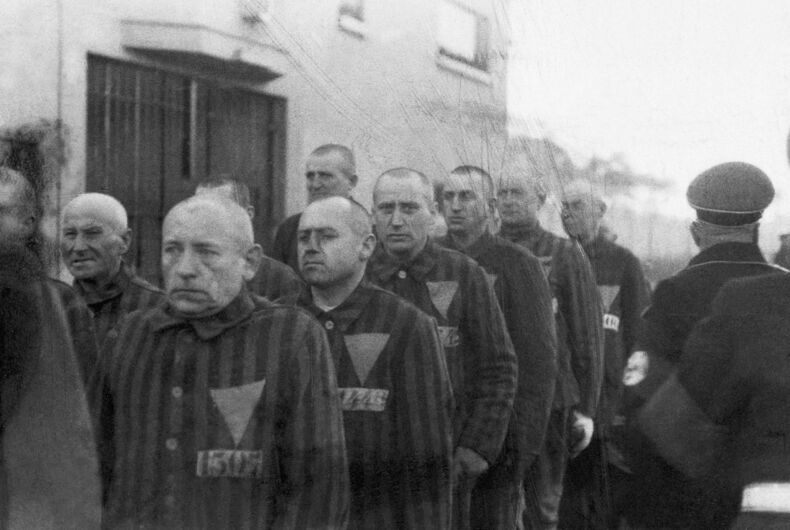 Prisoners wearing the pink triangle at the concentration camp at Sachsenhausen, Germany, are marched outdoors by Nazi guards on December 19, 1938. Photo: CORBIS

“The Republican Party must continue to uphold the principle that every human being, born and unborn, young and old, healthy and disabled, has a fundamental, individual right to life.” —from the Republican National Committee for Life

With the stunning revelations of a leaked 98-page majority opinion written by Justice Samuel Alito proposing to completely gut the 1973 Supreme Court decision in Roe v. Wade guaranteeing women’s rights to abortion on demand, it seemed inevitable with the unprecedented maneuvering and court packing of ultra-conservative “justices” under the Trump regime.

Related: The parallels between today & Nazi Germany are striking

Political pundits and court watchers are predicting that if the Supreme Court takes away the constitutionally guaranteed right to abortion, which has been granted for the past 49 years, it may reverse, as well, the right to contraception, marriage equality for same-sex couples, interracial marriage, sexuality education, and the total erasure of voting rights.

Republican leaders announced that among their primary and immediate items on their legislative agenda after the election of Donald Trump that they will cut funding for Planned Parenthood. While these health care clinics do not receive direct federal funding, they do collect approximately $500 million in federal programs from payments and grants, which accounts for about 40% of the organization’s yearly budget.

Though an estimated 2.5 million people throughout the country access Planned Parenthood each year for annual health checkups, screenings for diseases, and contraceptives, Republicans have attempted in the past to defund Planned Parenthood only to face a veto President Obama sat in the Oval Office.

In addition, with Trump, many Republicans applauded the three additional ultra-conservative judges whom Trump nominated to the Supreme Court and many more to lower courts.

In my continuing quest to understand and make meaning of current political, economic, and social realities, I constantly glance back into historical eras looking for similarities and parallels from which I can draw conclusions and possibly learn from past mistakes we as humans have made. While each era unquestionably poses unique conditions and challenges in many respects, I believe history has innumerable lessons to teach if we are willing to learn.

Though I rarely offer comparisons between events transpiring before and during the ascension to power of the German Third Reich with resemblances to the contemporary United States – since to do so could result in trivializing one of the most horrific episodes in human history – nonetheless, I am haunted by certain parallels that demand voicing.

I am troubled by multiple similarities between that time not so very long ago and the discourses expressed and events transpiring today. I want, therefore, to highlight, in particular, the parallels I see in Nazi portrayals and understandings of sex, sexuality, gender, and gender expression: a divisive and brutal program that was anti-feminist, anti-women’s equality, anti-women’s reproductive freedoms (anti-family planning, anti-contraception, anti-abortion), anti-lesbian, anti-gay, anti-bisexual, anti-transgender, anti-gender non-conforming, anti-sexuality education in schools.

For example, Alfred Rosenberg, one of the Nazi’s chief ideologues, directed his misogynist outrage against women:

“The emancipation of women from the women’s emancipation movement is the first demand of a female generation trying to rescue nation and race, the eternally unconscious, the foundation of all civilization, from decline…. [O]ne thing must be made clear: Only a man must be and remain judge, soldier, and politician.”

“Unnatural vice committed by two persons of the male sex or by people with animals is to be punished by imprisonment; the verdict may also include the loss of civil rights.”

Nazi ideology rested on the assessment that homosexuals (males) lowered the German birth rate; they endangered, recruited, enticed, and corrupted youth; that a possible homosexual epidemic could spread; that homosexuals are “potential oppositionists” and enemies of respectable society; and that sexual relations between people of the same sex impairs their “sense of shame” and undermines morality, which inevitably will bring about the “decline of social community.”

On the other hand, Heinrich Himmler, Gestapo head and chief architect of the Reich’s anti-homosexual campaign, justified his actions by arguing that male homosexuals were “like women” and therefore, could not fight in any German war effort. Subsequently, he conducted surveillance operations on an estimated 90,000 suspected homosexuals, arrested approximately 50,000, and transported somewhere between 10,000 and 15,000 to several concentration camps throughout the Nazi dominion. Very few survived.

The Nazi regime connected multiple forms of oppression when Heinrich Himmler reorganized the Reich Criminal Police Bureau to centralize operations by creating a national file on male homosexuals, transgender people (referred as “transvestites”), what they referred to as “wage abortionists” (women and their doctors), and to monitor the production and ban the use of contraceptives to “Aryan” women. Within this Bureau, they established The Reich Office for Combatting Homosexuality and Abortion, which in the single year of 1938 alone, conducted 28,366 arrests for abortion, and 28,882 arrests of gay men.

The common thread running through Nazi ideology regarding sex, gender expression, and sexuality was their intense campaign to control individuals’ bodies and the bodies of members of entire communities in the attempt to control their minds.

Throughout history, examples abound of patriarchal domination over the rights and lives of women and LGBT people, whom they have been constructed as second-class and even third-class citizens not merely in Nazi Germany, but today as the current political climate indicates.

Butler reminds us that the term “abjection” is taken from the Latin, ab-jicere, meaning to cast off, away, or out. On a social level, abjection designates a degraded, stigmatized, or cast-out status. In psychoanalytic parlance, this is the notion of Verwerfung (foreclosure).