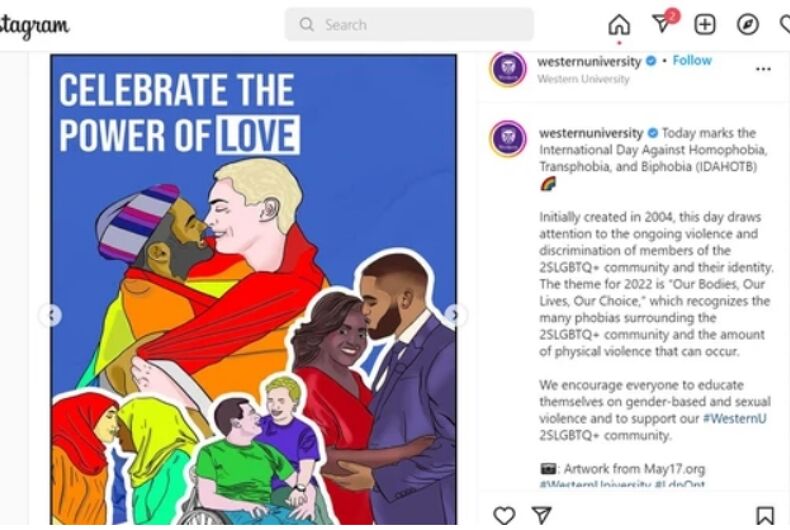 A university has deleted and apologized for a social media post showing two women in hijab headscarves about to kiss. The post garnered criticism from some members of the Muslim community.

Western University — a school in the Canadian city of London, Ontario — marked the International Day Against Homophobia, Transphobia, and Biphobia on Tuesday by posting an illustration on Instagram which proclaimed, “Celebrate the power of love.” The image showed four couples embracing: a male couple, a heterosexual couple, a person embracing someone in a wheelchair, and a female couple wearing hijabs as they leaned in to kiss each other.

In response, some members of London’s Muslim community criticized the image, calling it “inappropriate” and “disrespectful,” The London Free Press reported.

“Shame on you Western for such an insulting mockery post to my religion,” one commenter wrote. A local Muslim leader, Iman Abd Alfatah Twakkal, said that his faith community respects the rights of everyone and appreciates the image’s attempt at inclusion, but added, “singling a Muslim religious symbol in that setting is inappropriate.”

The university initially responded on the post by stating that they understood the image might be “upsetting to some Muslims” and calling the topic “complex and intersectional.” However, the university eventually deleted the image on Wednesday and issued a statement.

“We believe this presents an opportunity for genuine, thoughtful discussion about how we can best support members of the Queer Muslim community, and those from all faiths and backgrounds within the 2SLGBTQ+ community,” said Opiyo Oloya, a university official who oversees equity, diversity, and inclusion efforts. “In order to promote that discussion, we have removed the image from the post to not distract from these important conversations.”

The hijab is worn by many Islamic women as an act of worship and an expression of modesty. Some women wear it as a symbol of their ethnic identity and Muslim beliefs while others wear it in opposition to Western countries that have demonized Muslims and outlawed headscarves. Muslim religious writings aren’t clear on whether all women are required to wear them, but the scarf’s religious connotation makes some feel that they shouldn’t be shown on women committing “immodest” acts, like intimate physical acts.

Muslim culture isn’t inherently anti-gay: the Quran says nothing about homosexuality (unlike the Bible); Islamic history is filled with texts openly depicting homosexuality as a beautiful, matter-of-fact thing; and more American Muslims support same-sex marriage than do Christian Evangelicals, Protestants, and Mormons, according to a Pew Research Study.

This is who we are: A nation founded on racism