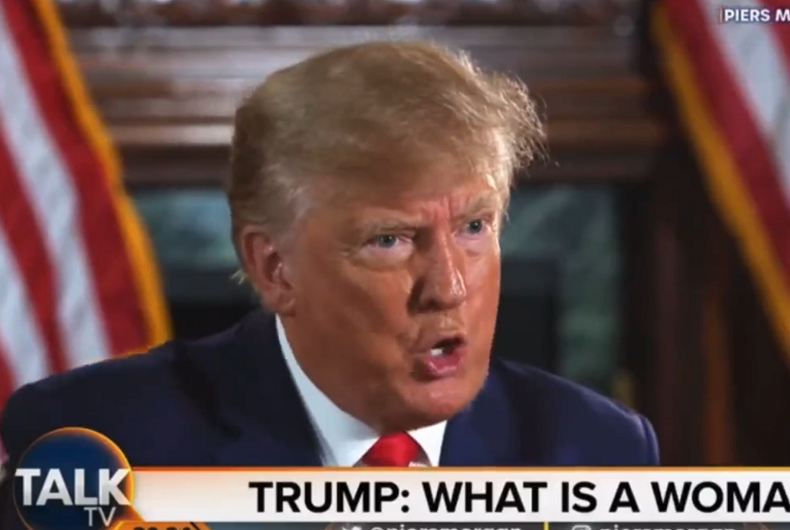 Former President Donald Trump has continued his hateful attacks on the transgender community by lying about trans children.

In an interview with the Christian Broadcasting Network, Trump falsely claimed that a majority of trans children end up regretting their gender transition.

“This transgender movement is out of control,” CBN interviewer David Brody told Trump. “[Democratic President] Joe Biden thinks there are at least three genders… I am curious… Do you see this… ‘transgender movement’ as evil, unbiblical?”

Trump replied, “That’s not the way it should be, that’s for sure. It is a terrible thing. I mean, especially when you’re taking children that don’t even have this period to form.”

“And you know, in many cases, I hear 60 percent of the cases, later in life, they say, ‘Why did they do this to me?’ Sixty percent,” Trump lied. “No, I think it’s a terrible thing.”

JUST IN: President Trump tells me the transgender movement is a, "terrible thing…that's not the way it should be." On LGBT Disney controversy he says, "Walt Disney is looking down & he's not happy ok? He said whatever happened to my beautiful Magic Kingdom?" @CBNNews @700club pic.twitter.com/cPPHmn84wI

Trump didn’t say where he got his statistic, but a study published Wednesday in the journal Pediatrics shows that he’s incorrect.

The study researched 317 children, ages 3 to 12 years old, who came from white, high-income families. By the end of the study’s five-year span, 94 percent of the kids were living as transgender and nearly two-thirds were medically transitioning by using puberty-blockers or hormones.

The study, the largest of its kind, found that “a majority of transgender youth and kids who make a social transition remain living in their affirmed gender,” according to Coleen Williams, a psychologist who works in a Boston Children’s Hospital clinic that treats trans kids.

As such, the study found that only a small number of trans children later de-transition in life; a fact that contradict’s Trump’s claim.

It’s hardly surprising that Trump would lie about trans kids. Not only is he the most transphobic president of all time, his Republican Party has introduced legislation nationwide seeking to ban trans kids from receiving gender-affirming medical care, playing on sports teams or having their identities even mentioned in schools.

Later in the interview, Trump claimed that Walt Disney was “looking down” and asking, “Whatever happened to my Magic Kingdom?” because the company spoke out against Florida’s “Don’t Say Gay” law. Florida’s law forbids most elementary school teachers from discussing LGBTQ issues in the classroom.

Trump then also complained about “men playing women’s sports”, his transphobic allusion to trans women playing on women’s athletic teams. He furthered the inaccurate claim that trans athletes are regularly breaking sports records. In reality, most trans athletes don’t break records; they just want to play sports alongside their friends.