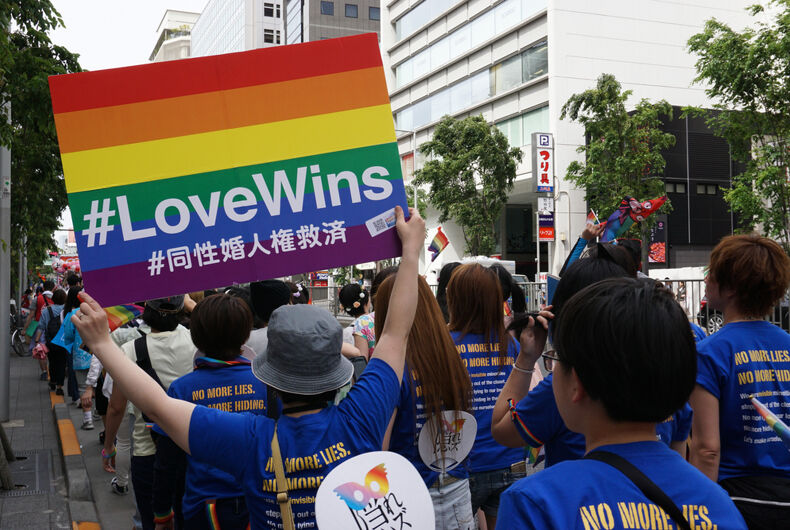 The Tokyo metropolitan government of Japan will start recognizing same-sex unions in order to make life easier for same-sex couples. The civil unions won’t have the same legal rights and protections as marriages, but the move marks the latest step towards LGBTQ acceptance in the Land of the Rising Sun.

On Tuesday, Tokyo’s government announced that it will accept applications from same-sex couples seeking certificates recognizing their partnerships starting in October. Foreign nationals will also be allowed to enter these unions with native-born citizens. These certificates will help same-sex couples rent apartments together, visit each other in city hospitals, and receive other services that married heterosexual couples enjoy.

“[The certificates are intended] to promote understanding among Tokyo residents about sexual diversity and to reduce inconveniences in daily lives surrounding sexual minorities in order to create more pleasant living conditions for them,” Tokyo’s government said in a statement, according to the AP.

LGBTQ advocacy groups have pushed for a national bill that would enshrine equal civil rights and non-discrimination protections into law. However, the conservative party of Prime Minister Fumio Kishida helped defeat the effort, leading up to last summer’s Olympic Games.

Despite this, a 2013 study by the Pew Research Center showed that 54 percent of Japanese citizens believe that homosexuality should be socially accepted. Accordingly, 200 cities across Japan have begun offering certificates recognizing same-sex civil unions. Collectively, these municipalities represent 12 percent of the country’s total cities.