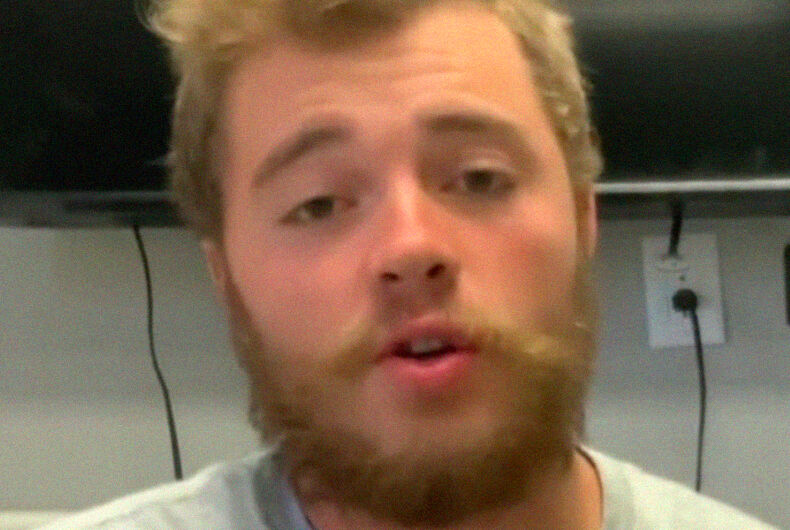 Ethan Schmidt, a 24-year-old right-wing extremist, has announced that he will be “hunting” LGBTQ allies around Phoenix, Arizona during June, Pride month.

In a video recorded by Schmidt and re-posted onto Twitter by the right-wing watchdog account PatriotTakes, Schmidt explained that, during June, he plans on “exposing” the “Satanic Pride shrines for children” and LGBTQ-supportive employees at Target retail stores.

“We’re not going to let corporate poison the children,” Schmidt adds. “So Target, we’re just giving you a heads up that we’re going to be coming after you hard…. This is going to be next-level stuff.”

Schmidt speaks while riding in a vehicle alongside a man in sunglasses named Kyle Clifton. Clifton has described himself as an “authoritarian Christian nationalist,” according to The Los Angeles Blade. He also leads the America First Union, an openly white nationalist, antisemitic, “conservative youth” organization.

In the video, Clifton then looks at the camera and says, “Christ wins. LGBT loses.”

Schmidt then continues by saying, “I also like to hunt LGBT supporters on my free time. That’s one of my favorite pastimes…. We’re going to be going on hunting expeditions pretty soon, y’know, hunting LGBT supporters across Phoenix and Arizona…. If you support the LGBT agenda, you’re not safe. You’re not safe. Right, Kyle?”

There are approximately 25 Target retail stores in Phoenix, Arizona. For the past several years, Target stores have offered a summertime Pride collection featuring clothing with rainbow-colored and LGBTQ-supportive designs created by queer designers. Proceeds from the collection go to the LGBTQ student advocacy organization GLSEN.

This isn’t the first time Schmidt has threatened to hunt LGBTQ people and allies — he has passed off his previous threats as “jokes.” He has been banned from numerous social media platforms for allegedly spreading false information about the COVID-19 pandemic. He has also posted numerous videos in which he harassed businesses for requiring patrons to wear masks.

In a late 2021 video endorsing Arizona Gov. Kari Lake (R), Schmidt burned a rainbow Pride flag. His promise to hunt down LGBTQ supporters and his equating of them with pedophilia are similar to Russian anti-LGBTQ vigilantes who recorded videos of physically threatening and humiliating queer people.

Schmidt has also appeared in an anti-vaccination video with Rep. Paul Gosar (R-AZ) and another video with Arizona State Sen. Wendy Rogers (R). Rogers was censured by her Republican congressional colleagues in March for speaking at the America First Political Action Conference, an event organized by white nationalist Nick Fuentes.

Fuentes is a self-described involuntary celibate who recently told his straight male viewers that “having sex with women is gay.”

Fuentes, Rogers, and Clifton have all repeated the white supremacist “replacement theory,” which states that white voters are being replaced by non-white people. This increasingly mainstream Republican theory was cited by a mass shooter who recently gunned down Black shoppers in a Buffalo, New York supermarket.

Ethan Schmidt, a right wing provocateur who has made videos with Kari Lake, Wendy Rogers, and Paul Gosar, warned Target he will “hunt LGBT supporters” in their stores and across Phoenix in June, stating they “are not safe” and they “can’t hide.” pic.twitter.com/O3ReHVN3qY