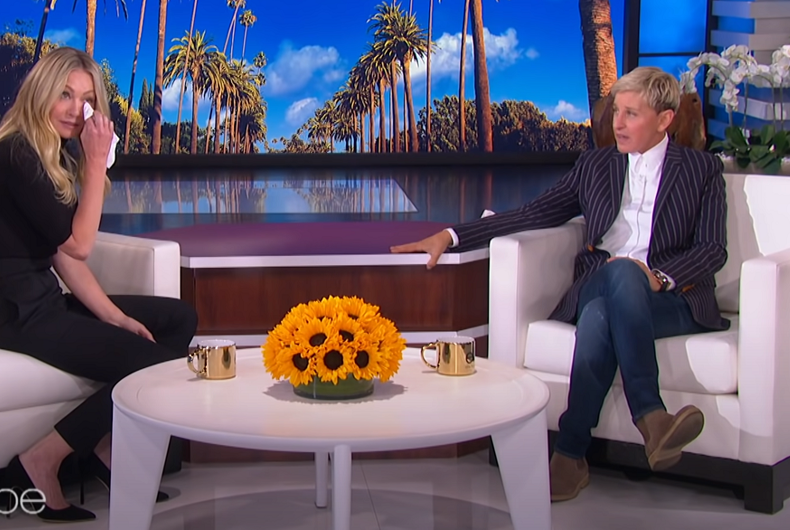 Actress Portia de Rossi explained how she thought she killed her 99-year-old grandmother when she came out by telling her that she was dating Ellen DeGeneres.

De Rossi – who is best known for her roles on Ally McBeal, Arrested Development, and Scandal – appeared on her wife’s show yesterday and talked about how she came out to her beloved grandmother, who she said was a “huge fan” of Ellen’s 90s sitcom Ellen.

Her grandmother “wouldn’t miss an episode, until the episode where she came out,” de Rossi said, referring to the 1997 episode where Ellen’s character and Ellen herself came out.

“I know I’m gay at this point, I love my Gran,” she continued. “The minute that Ellen came out, she refused to watch the show. In fact, if a commercial for the show came on, she would change the channel and say, ‘That disgusting woman.'”

“That didn’t bode well for me,” she said.

De Rossi said that she moved from Australia at around that time to pursue an acting career in Los Angeles. She started dating Ellen and then went back to Australia to visit family.

“I sat by Gran’s chair at her feet and she said to me, ‘Are you seeing anyone special?'” de Rossi said. She said that her mother was supposed to have told her grandmother that she was living with Ellen.

“I said, ‘You knew that I lived with Ellen.’ And she said, ‘Yes, and all this time I was worried that that lesbian was hitting on my granddaughter,'” de Rossi said.

“So then she literally put her head in her hands for 20 seconds, or 30 seconds, silent,” de Rossi said. “I thought: ‘That’s it. I’ve killed my grandma.’ She’s just gonna literally fall-  I really thought that I did. And she just looked at me, and she goes, ‘Well, I love you just the same.’”

Ellen said that de Rossi’s grandmother died several years later at age 103 with their wedding picture next to her bed.

The Circle is back & it’s gonna be the spiciest yet