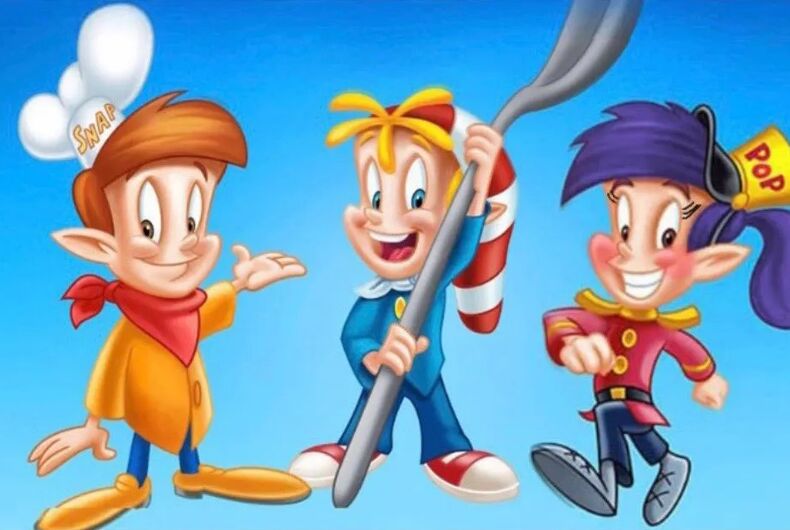 No, Rice Krispies did not announce that Pop is becoming a transgender character.Photo: Screenshot

Trump supporters have hit a new level of madness with what may be the dumbest conspiracy theory to sweep through MAGA social media.

A doctored image has the far-right believing that Kellogg’s has announced that one of the mascots for Rice Krispies cereal is now a transgender woman. The allegation is false.

The graphic, a spoof of a CNN news story, blares “Kellogg’s spokesperson announces Rice Krispie [sic] mascot ‘Pop’ is now a trans woman” across the headline with a doctored image of the three icon cereal scamps Snap, Crackle, and Pop. Pop is depicted with rosy cheeks, eyelashes and a purple ponytail.

“We have made no changes to the Rice Krispies mascots, Snap Crackle and Pop,” Kellogg’s spokesperson Kris Bahner stated. A spokesperson for CNN also confirmed that the story is fake.

“Together with Pride” from Kellogg’s, a limited-edition cereal, was released in 2021 to celebrate Pride and quickly sparked ridiculous claims about other cereal mascots.

“General Mills has, I think General Mills has a gay leprechaun, right?” asked NewsMax host Grant Stinchfield. “Well, my producer Carly asked me, ‘Is that leprechaun really gay?’ I said I don’t know, maybe: he wears high-heeled shoes, prances around in tights, leads me to believe, probably, that little Lucky Charm leprechaun might be gay.”

“The cereal is Rainbow hearts, covered in edible glitter. How nice,” he sneered. “Give me a break. Here’s the worst part, the cereal slogan, ‘Too amazing to put into a box,’ and then lists a space for kids to write in their own pronouns. Seriously.”

He joked that General Mills beat Kellogg’s to the punch because the Lucky Charms leprechaun “wears high-heeled shoes, prances around in tights.”

“For those of you that want to vilify me for those comments right, right there, aren’t you just as offended by the flamboyant rainbow hearts and glitter as a symbol of gayness? See, there are two standards here.”

Snopes reports that the Rice Krispies claim originated on the far-right message board 4-chan.

Gay music teacher was blackmailed. Instead of helping him, his school forced him to resign.

Eric Kim on coming out, the perfect fried chicken, and why he prefers a round table