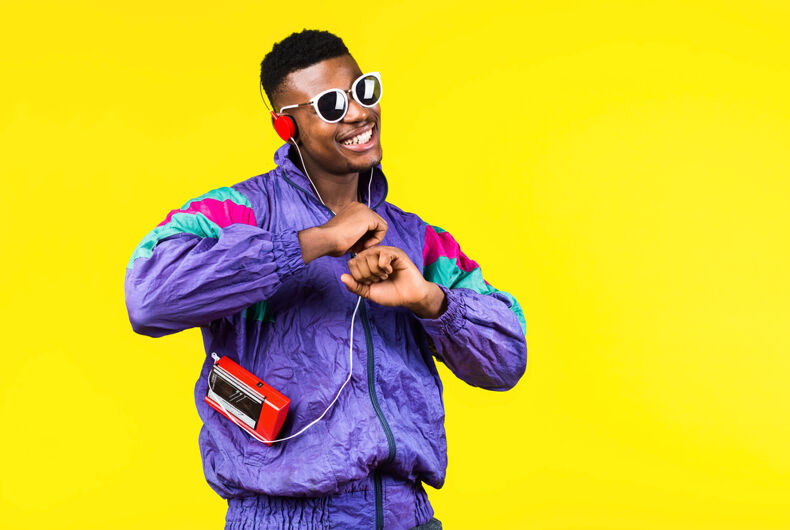 I love a lot of music and movies from the 1980s. I recently lionized Cyndi Lauper on this very website. And do movies get any better than those two 80s stand-outs, The Empire Strikes Back and Indiana Jones and the Raiders of the Lost Ark?

So for a long time, I attributed my like of 80s music and movies to plain old nostalgia — the fact that I associate certain songs and movies with my youth.

Then again, I’m not particularly impressed by 80s TV. Thanks to cable and streaming, I recognize television is much better now.

And traveling the world for the last five years, I’ve noticed something interesting: I hear 80s music everywhere, much more than I hear contemporary music. I also constantly see references to 80s movies like The Terminator, Aliens, and Back to the Future.

Stranger Things is fantastic storytelling, but I think its wild, breakout popularity can be at least partly be attributed to the fact that it’s set in the 80s — and that it cleverly and constantly pays homage to that decade with every aspect of its being.

In other words, 80s music and movies made a surprisingly strong and lasting cultural impact, not just in the United States but all around the world.

So maybe the appeal of 80s music and movies is about something more than just me growing older.

In terms of movies, the 80s were the dawn of the Blockbuster Era — the post-Jaws and post-Star Wars period when movie studios realized they could make a shitload of money by making broadly popular entertainment and then hyping the hell out of it.

With the rise of music chains, better distribution, and a thriving entertainment media, the music industry had stumbled upon the same thing.

So that became the mandate: let’s make things that are really popular! The whole point was to appeal to as many people as possible.

In movies, the buzzword was “high-concept,” which means stories that immediately grab you: understandable set-ups with clever or funny twists. In practical terms, this meant accessible comedy, and more audience-friendly genres like adventure, sci-fi, and fantasy.

The result was often big, broad, and fantastically entertaining movies like Big, Wargames, Working Girl, and Beetlejuice. As much as I’ve always wanted to hate Field of Dreams, I just can’t.

Even 80s dramas like Stand by Me, Terms of Endearment, Fried Green Tomatoes, and Dead Poet’s Society were unapologetic crowd-pleasers.

Eighties music brought us power ballads, the Second British Invasion, supergroups, Prince, Michael, Van Halen, the Eurythmics, Madonna, Whitney, the Police, and, yes, way too many synthesizers. But it also gave us all those insanely catchy hooks that are still being sampled all these decades later.

Eighties America was also generally an optimistic era (as opposed to the pessimism of the 70s or, well, now), and irony was only starting to creep onto the scene. Entertainment reflected that.

At the time, plenty of cultural critics lamented the cynicism of these bold appeals to widespread popularity. But the works themselves weren’t cynical. The artists who created these works had been forged in the 70s — the era of the auteur filmmaker and the earnest singer-songwriter. They took craft very seriously, even if they were now trying to make insanely popular things.

Meanwhile, the music and movie corporate Powers That Be hadn’t yet been completely corrupted by the bottom line. They could sometimes be convinced to take chances. In Hollywood, foreign sales had yet to eclipse the actual movie.

More than anything, the mandate was “fun.” Aliens phoned home rather than destroying the White House (or boring the hell out of us, as in Prometheus or Annihilation). Main characters were mostly decent people trying to do the right thing.

In music, I just died in your arms tonight, and we can build this dream together because nothing’s gonna stop us now. Optimism was in.

Here’s where I need to be very clear about something: the 80s media fun was not necessarily shared by all. The decade was fairly bleak on issues of race and gender. If you haven’t read Molly Ringwald’s fascinating analysis of her own movies from the 80s in light of #MeToo, you really, really should.

In the 80s, the amazing Kim Cattrall had the choice of playing either a nymphomaniac gym teacher (in Porky’s) or a literal mannequin (in Mannequin). It wasn’t until the late 90s that she landed her infinitely more interesting dream role of Samantha Jones.

And to keep her music career alive, Sheena Easton had to sing about her vagina (in “Sugar Walls”), but not in a Vagina Monologues kind of way.

A lot of it has aged spectacularly badly. It’s now painful to watch films like Fatal Attraction, Basic Instinct, and every teen sex comedy that isn’t Risky Business or directed by a woman (i.e. Amy Heckerling’s Fast Times at Ridgemont High). And I flatly reject the argument that “no one” saw these retrograde themes at the time because, frankly, plenty of us did — and wouldn’t shut up about it.

In the music business, even gay or bi superstars like Boy George, Elton John, Freddie Mercury, David Bowie, and George Michael had to be mostly or completely closeted — in their personal lives and also in their music. And too many talented women and folks of color weren’t allowed to play in the sandbox at all.

Then again, the mandate back then was “fun”: entertainment, not diversity.

Even so, there were still bright spots. It’s true, Tootsie explored sexism by telling the story of how hard it is when…a man pretends to be a woman. And in Victor/Victoria and Yentl, two straight white women learn…how hard it is to be gay.

But these were also three masterful movies, big and broad and terrifically entertaining, but also daring to inject bold, then-provocative ideas directly into the cultural bloodstream.

And it’s fine to criticize, say, The Breakfast Club for some of its sexual dynamics, especially that clunky scene where Allie Sheedy’s great outsider character is homogenized in order to be accepted by the other kids (and, frankly, by 1985 audiences). But I think it’s important to remember how profoundly revolutionary that movie was in so many other ways.

As for music, well, Janet finally did take “control,” right?

The point is, a movie or song — or even an entire decade — can be more than one thing: unenlightened in some ways and groundbreaking in others.

Look, maybe this entire essay really is just a case of nostalgia justification — or, worse, another pathetic example of an old man yelling at a cloud.

But if so, I’m not the only old man yelling at this particular cloud. Did we not all just sit through J.J. Abrams’ filming two beat-for-beat remakes of movies from the original 80s Star Wars trilogy? And most of us loved it.

And we’re all currently making 80s musical acts rich. Paul Simon, Stevie Nicks, Bruce Springsteen, and Fleetwood Mac have all recently sold their song catalogs for tens of millions of dollars. It’s partly about future sales, but it’s mostly about licensing: corporations are betting that people will pay big to feature these comfort songs in their content for many years to come.

In short, a lot of us feel nostalgia for 80s entertainment. And why not? The hooks were strong — in the music and the movies.

Stranger Things doesn’t just pay homage to 80s actors and tropes; it also blatantly mimics the 80s style. In almost every scene, it gives us something to cheer for. And the show has a complete lack of irony.

In music, I’ll just say it: I like melody. Give me the power in those power ballads. To this day, I can’t walk past a flowing curtain without thinking of the video for Bonnie Tyler’s “Total Eclipse of the Heart.” Can anyone?

For what it’s worth, I have absolutely no desire to go back to the 80s.

Sure, maybe the creative energy in film has now shifted from the blockbuster to the niche. But niches aren’t necessarily bad. Streaming and changing technology have also made more opportunities, and there’s more diversity too, in every sense of the word.

I don’t know the music industry as well as I do movies, but there are still plenty of musicians making fantastic music. I hope at least some of them are getting paid.

The 80s are over, and they’re never coming back. Nor should they. A lot of old attitudes really did need to die.

But not everything about the past needs to be rejected. Against all odds, the music and movies of the 80s have lasted and thrived.

I think it’s for all the reasons I’ve said, but mostly that wonderful lack of irony. Harrowing character studies of broken people have their place in the world, and anti-heroes do too. Hey, let’s reclaim some more villains while we’re at it.

But I think we’re all getting a little tired of being told nothing matters and feelings make you a chump. Not everyone is an asshole. A little less snark — and a lot less cynicism — would go a long way toward making the world a better place.

In The Outsiders, another classic 80s movie, Johnny tells Ponyboy to “stay gold.”

That is a good way to be. So for the time being, I’m going to keep liking sunsets — and a lot of 80s music and movies.

Stay gold, Ponyboy. And pass me the hair-gel and leg-warmers.