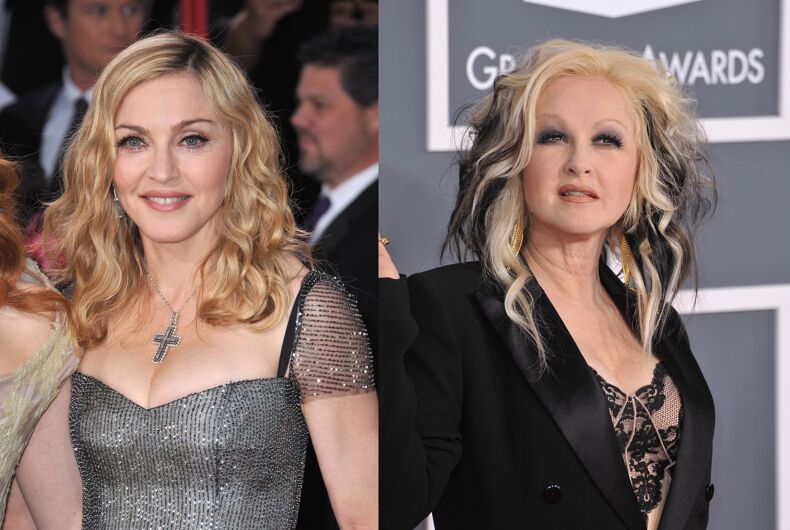 I am a child of the 80s, and I absolutely loved Cyndi Lauper. And I didn’t get Madonna at all.

Back in the 80s, Madonna and Cyndi were two of the most famous women in the world. So, of course, they were pitted against each other, because America loves doing that to famous women.

But the truth is, they were kind of polar opposites.

Madonna was brash and bold and, boy, was she sexual. She was absolutely in your face, the opposite of subtle in every possible way. She was also really good at stealing and popularizing trends from the edges of society.

But while she pretended to be challenging and “subversive,” she wasn’t really, not to the young audience that was hungering for someone like her. She gave them exactly what they wanted (times ten, admittedly).

Cyndi seemed to come at things from an entirely different angle. She was bold too, but it was weird-bold. She could be wild at times, but she was also cerebral and subtle. Sure, she sang about sex (in really interesting ways, like in “She Bop” and “All Through the Night”), but she didn’t use sex to sell herself.

She was all class, not crass. She did things because she was drawn to them, and it seemed like she really didn’t care what the audience thought. Unlike Madonna, Cyndi Lauper was, well, expressing herself.

Plus, Cyndi was also obviously really, really talented musically, whereas Madonna was…really good at self-promotion? In my mind, they were the perfect example of Art vs. Commerce. Substance over Style. Cyndi was an artist, and Madonna was a brand.

Back in the 80s, when I was young and idealistic, I assumed that Cyndi would be a superstar forever: that her talent and subtlety and genius would be rewarded, and she would obviously outlast Madonna’s flash and glitz and even her sex appeal.

Needless to say, I could not have been more wrong.

Madonna went on to become one of the most famous people in the world for the next three decades. And Cyndi never even came close to reaching the success of her first, spectacular album, She’s So Unusual. Sure, she had a few more hits, like “True Colors,” and I think Hat Full of Stars was criminally ignored. But her moment in the full glare of the zeitgeist sun was fairly brief.

The Cool Kid won out over The Dork.

Back then, watching the trajectory of these two women’s careers, my worldview was shaped in a very fundamental way. I was an artist myself — a novelist and screenwriter — and I spent more than a few years attending the School of Hard Knocks.

And I came to a very firm conclusion: Pop culture success isn’t about talent at all. It’s mostly about flash and glitz and timing. Self-promotion, basically, and a lot of luck.

“People are pretty stupid,” I thought. “They really don’t want to think.”

Years later, you still might catch me privately sounding off on something akin to this cynical, bitter take on American culture. But I’m older now, and maybe I’m not any wiser, but I do have a bit more perspective.

First, I understand that what Madonna did, having her finger so directly on the pulse of the American public for so long, was a kind of genius. She had some catchy songs too. Please don’t flame me. This is just my opinion, okay?

Second, I now also understand that pop culture is mostly about commerce — duh! — but it’s also about culture; it’s its own fascinating bucking bronco, and if you choose to climb on board, you just have to sit back and enjoy the ride.

As for “artistic success,” that’s an even more complicated beast.

I used to be bitter that Madonna was so much more successful than Cyndi. But what I didn’t know then is that Lauper’s story wasn’t over yet.

Sure, she didn’t stay a musical superstar for long, but she didn’t give up music. She went on to record a series of sometimes fantastic albums in genres like blues, jazz, funk, and country (!).

She became a Big Gay Icon.

Oh, and she started writing Broadway musicals like Kinky Boots and became the first woman to win a solo Tony for Best Original Score.

Career-wise, where are Madonna and Cyndi Lauper these days?

Well, Madonna is still famous, but pop culture is fickle. Her headlines are now mostly about her trying to stay “young” and relevant. She’s become a polarizing figure, mocked (in blatantly ageist ways) for her plastic surgery and for “trying too hard,” as if what she’s been doing all along is now a bad thing. How dare she be an ambitious woman in her sixties! She had her finger on the pulse of the public…until she didn’t. She’s become a nostalgia act.

Meanwhile, Cyndi is “relevant” again, thanks to her hit musicals: the latest, Working Girl, based on the movie, will soon reach Broadway. She’s also widely loved and respected. Is there anyone on Earth right now who isn’t duly impressed by her grit, talent, and obviously massive heart? She’s like Dolly Parton, except weirder, and what Lady Gaga hopes she’ll be when she grows up.

In my mind, there’s no question who ultimately won the Madonna vs. Cyndi Lauper face-off, but I also now see what an incredibly stupid framing that was of the two women’s careers. They weren’t even competing, if only because Cyndi was playing an entirely different game.

Finally understanding all this, it’s reshaped my worldview, in another fundamental way.

I think about my own career as a writer. I’ve had my successes, and I’ve had more than my share of frustrations and failures too.

And now here I am in my fifties, writing a travel newsletter for Substack that I love doing and has turned out to be very successful. Who knew?

I’ve come to see that Cyndi was right all along. To be an artist and not go insane, you have to play the long game. If you’re making art for fame, or to please other people, you’re almost certainly going to end up frustrated and disappointed. The audience may or may not be stupid, but it’s definitely fickle.

But if you’re making art for yourself? One thing is certain: you’ll never be bored. And how satisfying will it be when the audience finally celebrates you in all your weird and wonderful glory?

In the end, every artist must choose: Do you want to be the Material Girl or a Girl Who Just Wants to Have Fun?

I say go for the fun. It feels so much better in the end.