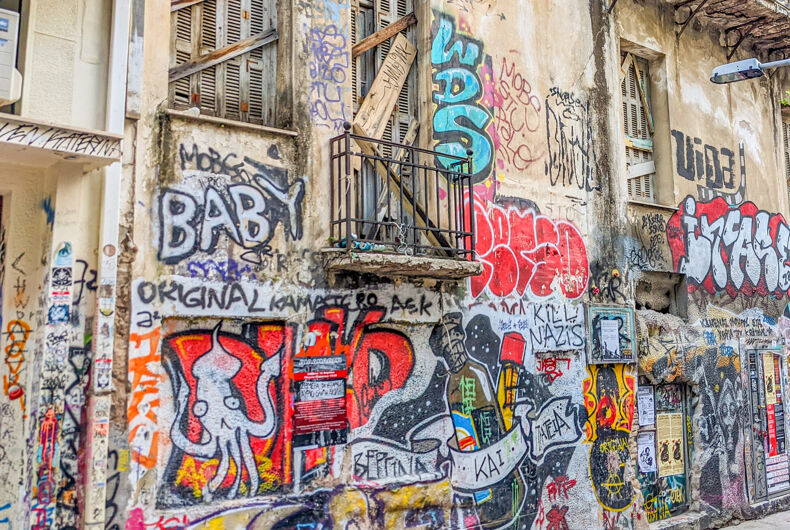 One of the more disheartening aspects of Brent’s and my recent visit back to our former hometown of Seattle, Washington, was discovering an epidemic of graffiti across the city.

Brent and I are former Seattle homeowners who once had a beautiful cedar fence that a thoughtless graffiti “artist” had to make his own. Even after painting over their “art,” it was never the same. It was cedar!

Call me a hopeless bourgeois if you must, but I still believe in private property. I think defacing someone else’s property makes you an asshat, not some edgy, artistic rebel striking a blow for personal expression.

Of course, graffiti isn’t just a problem in Seattle or even America. It’s common in Europe too. Did it get worse during Covid when so many businesses were closed and unguarded? Opinions vary — does anyone measure these things in an official capacity? — but it seems to me like it has.

To be clear, graffiti is not the same as street art, which I am on record as having loved in past places we’ve visited, like Puerto Vallarta, Mexico; Split, Croatia; and Istanbul, Turkey.

What’s the difference between street art and graffiti? There’s definitely an “eye of the beholder” element. But is there a difference in artistic value?

That depends on the eye of the beholder too.

As for me, I feel about graffiti the way U.S. Supreme Court Justice Potter Stewart famously wrote about obscenity: “I know it when I see it.”

If I mostly like street art, I almost always hate graffiti.

Here’s one definition between the two: graffiti is typically word-based, illegal, not meant to be understandable to those outside the graffiti community, and often involves tagging, which is the creator’s “signature.”

Meanwhile, street art is usually image-based, is intended for the general public, and is often (but not always) legal. It can range from huge murals covering the entire sides of buildings, to much smaller works of art painted on utility boxes, doorways, and even stairs.

Maybe I’m simplifying things, but street art is often awesome and open-ended, saying something positive about the world, but graffiti is almost always petty, hostile, small, and selfish.

The first time I visited Lisbon, Portugal, I was enchanted by the beauty of the city but appalled to see graffiti scrawled all over the stately buildings and classic streetcars, and even some of the city’s famous funiculars. Everything it touched, it made it much, much worse.

I’ve now seen graffiti all over Western Europe, in Rome, Genoa, Marseille, and elsewhere. On our trip to Spain last month, we visited cities we’d seen before, like Malaga and Barcelona, and the problem seemed worse than ever.

All this time, I’ve thought of graffiti as a real blight.

Brent and I are now living in Athens, Greece, and I recently discovered a neighborhood known as Exarcheia. It’s the “anarchists quarter,” the place where radicals and counter-cultural types have long gravitated.

In a continent covered in spray paint, Exarcheia might also be Europe’s graffiti epicenter. I’ve never seen anything like it.

There’s also lots of fantastic street art here, much of it by some of the most well-known street artists in the world, including Wild Drawing (WD) and Leonidas Giannakopoulos.

But for every piece of street art, there are at least a hundred works of graffiti. And it’s made me realize something important.

At first, I hated it, just like I always hate graffiti. I hated seeing all the storefronts defaced with incomprehensible scrawls, and the public walkways garishly marked up. In the nearby parks, the boulders are covered with it, sometimes even rocks that seem far too small to be worth the effort.

But here’s the thing about Exarcheia: it’s not the most attractive place to begin with. Unlike Lisbon, the graffiti isn’t marking up classic, well-preserved buildings.

Athens isn’t strong on urban planning and many of the buildings are built haphazardly, often in an ugly “brutalist” style. Plus, many haven’t been well-maintained.

Exarcheia dates back to the 1870s, and it’s seen a lot of conflict and chaos over the years, much of it violent. That violence has left a mark.

It’s also long been one of Athens’ poorer neighborhoods. The Great Recession and European Debt Crisis back in the late aughts didn’t help matters.

As an (amateur) photographer, I wanted to capture a sense of the place where we were living.

At first, I mostly wanted to document my outrage over the graffiti. Call it hate photography.

But then I took the time to learn more about Exarcheia’s history as Greece and Athens’ countercultural heart.

Sometimes you gotta love people who not only think outside the box, they tell the box to go straight to hell.

I also learned what the people who live here think about all this graffiti. This is their home, after all.

One local told me, “If you choose to live in this neighborhood, you know what it’s all about. This is part of why you live here.”

Discussing the same issue, another local friend told me something interesting. As we walked past some graffiti, he said, “Who do you think owns the surface of the building, the outside of the wall?”

As a former homeowner, I said it’s definitely the owner of the building.

My friend shook his head. “Greeks don’t think that way. They dislike authority and being told what to do. They very much value the right to speak up. And for them, graffiti is part of the way you speak up. So a lot of people think the outsides of the buildings belong to everyone.”

I know that Greece is a gritty, chaotic place with a long tradition of resisting authority, but his answer surprised me.

Taking all this in, I soon had a graffiti-related moment of “gestalt.”

One morning, one particular wall of graffiti stopped me in my tracks. I snapped a photo, but then rather than moving on, I stood there studying the wall.

At first, I only saw graffiti, street art, a decaying building, and even flyers on a nearby lamp pole.

And then something happened. I stopped seeing the area as just those individual things; I realized the scene was more than the sum of its parts. I suddenly saw the neighborhood in its entirety: the past, present, and maybe even the future, all coming together as one.

Looked at as a unified whole, that crazy mess of a wall worked. Even the graffiti. It reflected the soul of this complicated, often troubled neighborhood.

But here’s what’s different in Exarcheia: the graffiti is a part of things. The people who live here embrace it, and some are even proud of it. It represents their values and their view of the world.

I don’t want the rest of Athens to look like Exarcheia, much less the rest of Europe and America.

But part of travel is seeing things as they are, not as I wish them to be. And Exarcheia helped me see the neighborhood, and its graffiti, for exactly what it is.