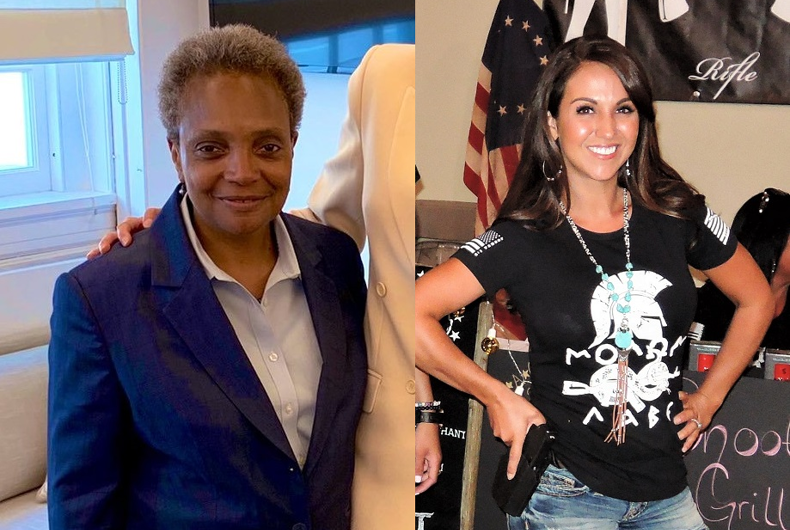 Rep. Lauren Boebert (R-CO) cheered on the MAGA insurrection at the Capitol and repeatedly touted former President Donald Trump’s Big Lie that the election was stolen. The clueless congresswoman has posed with guns and regularly launches broadsides against Democrats on Twitter.

But when out Chicago Mayor Lori Lightfoot (D) warned LGBTQ people that if the Supreme Court overturns Roe v. Wade their civil rights are next on the chopping block, Boebert tried to paint the former federal prosecutor as an “insurrectionist.”

“To my friends in the LGBTQ+ community—the Supreme Court is coming for us next. This moment has to be a call to arms,” Lightfoot tweeted, following up with, “We will not surrender our rights without a fight—a fight to victory!”

We will not surrender our rights without a fight—a fight to victory!

Never one to miss an opportunity to self-own, Boebert used the moment to accuse the mayor of… insurrection.

“Lori Lightfoot just issued a ‘call to arms’ to her fellow radicals directly on Twitter,” Boebert tweeted in response. “While people are being slain in her streets on a daily basis, all she can worry about is endangering more lives with her reckless words. Shame on her. She should resign.”

In a previous tweet, Boebert had said simply, “Insurrectionist.”

Lori Lightfoot just issued a “call to arms” to her fellow radicals directly on Twitter.

While people are being slain in her streets on a daily basis, all she can worry about is endangering more lives with her reckless words.

Shame on her. She should resign.

But the internet wasn’t about to let Boebert off the hook with a comment like that. Users shared similar tweets Boebert had posted, including alleged calls for revolution and sharing House Speaker Nancy Pelosi’s (D-CA) whereabouts during the riot. Trump supporters were parading through the Capitol building calling out Pelosi’s name and threatening to murder her.

They also quoted Lightfoot directly after rioting and racial justice protests when she called for calm, saying, “We can never, ever sanction any kind of violence regardless of what the motivation is. Our democracy is imperiled when people believe, for any reason, that they have the right to take up arms or violence against people with whom they disagree.”

“Lauren Boebert is what happens when you try to make stupid from concentrate and forget to add the water,” another user tweeted.

But one user summed up the general feeling online succinctly.

“Thank you for admitting it,” they responded.

Thank you for admitting it 👍

Fixed it for you pic.twitter.com/FAJxeQjkI9

Takes one to know one

Is this your confession Lauren? pic.twitter.com/eBJYxblqnv

You may wanna Google that word BoBo… pic.twitter.com/WnmUDvMujw

The future of democracy hinges on these eight midterm races