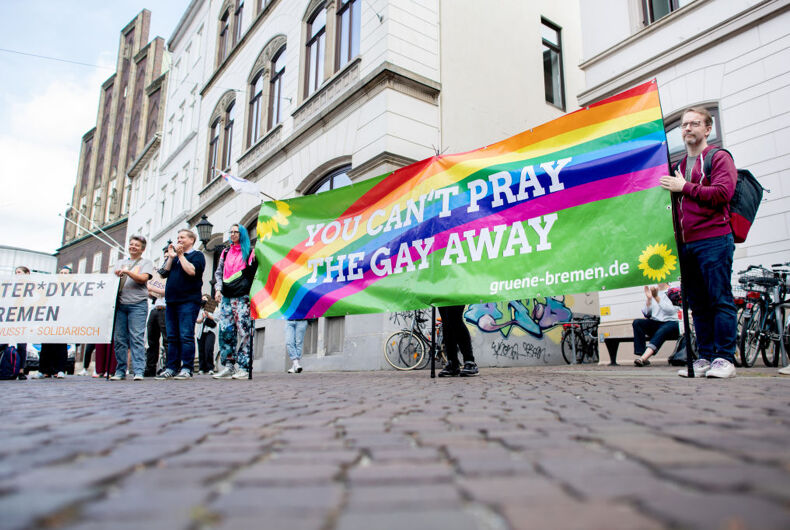 20 May 2022, Bremen: Demonstrators stand with a banner reading "You can't pray the gay away" in front of the Bremen Regional Court on Domsheide. The Bremen Regional Court has acquitted a Protestant pastor of charges of incitement of the people. The background was derogatory remarks by the pastor in a marriage seminar in October 2019 about homosexuality and gender forms. Photo: (Photo by Hauke-Christian Dittrich/picture alliance via Getty Images)

LGBTQ people and allies protested outside of the Bremen Regional Court after a hate preacher was acquitted of trying to stoke violence against the queer community.

Pastor Olaf Latzel has made headlines repeatedly in Germany for his extremist stances cloaked in religious piety. He’s so far right that even the head of the Evangelical Church in the country has denounced his views.

Related: Doctor smacks down GOP Congressman who tried to troll her by asking “What’s a woman” in a hearing

Latzel described being gay people as a “degenerative forms of society” who are “worthy of death.”

“The whole gender crap is an attack on God’s order of creation, is deeply diabolical and satanic,” he later added. “This homolobby, this devilish thing, is getting stronger and stronger, ever more massive, pushing more and more into it.”

While the original judge found him guilty of sedition and promoting hatred of minorities, sentencing him to a fine of €8100 ($8500), the appeals court disagreed and overturned the conviction.

The Evangelical Church was awaiting the decision before deciding whether or not to defrock the hateful preacher, saying, “Intolerance is against the gospel, pejorative and discriminatory attitudes must have no place in the church.”

Pride In Pictures: Celebrating our anniversary at pride

The more easily disgusted you are, the more likely you are to be a conservative