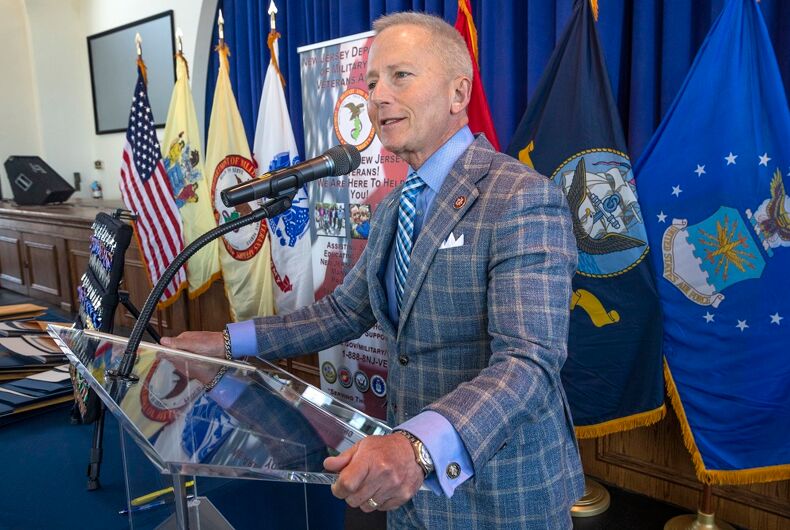 A Republican Congressman has introduced a bill to require schools to get parental consent before any discussions of LGBTQ people can be held at schools.

Rep. Jeff Van Drew (R-NJ) introduced the My Child, My Choice Act (MCMCA) this week because, he claimed, schools are “compromising the safety of our young children.”

The bill says that teachers at elementary schools will “request written consent” from parents at least 30 days before “teaching a lesson specifically related to gender identity, sexual orientation, or transgender studies.” If fewer than 50% of parents give such consent, then the teacher would be banned from discussing the topic with the other students as well. He did not cite any precedent in treating the curriculum like a democracy.

Any school that does not obtain the necessary parental consent would lose federal funding.

Van Drew said in a press release that he introduced the MCMCA to prevent New Jersey’s “Transgender Student Guidance for School Districts” from being implemented, even though his bill has to do with curriculum, not what bathrooms trans students use at school.

“While every child should go to school and feel accepted and comfortable, we should not be compromising the safety of our young children by allowing restrooms and changing rooms be available to any child regardless of their actual gender,” Van Drew said. “The whole country saw late last year the terrible event that took place in Loudon [sic] County Virginia where a young girl was sexually assaulted in the girl’s restroom by a boy who dressed in girls’ clothing.”

He was referring to an alleged case of a cis boy sexually assaulting a cis girl in Virginia, a story that rightwing media has been lying about for months. The victim invited the boy into the bathroom with her where he sexually assaulted her, the rapist was not given access to girls’ restrooms by the school, and he was arrested last year. The story has nothing to do with transgender equality.

“Parents deserve to have a say in what their children learn in school, and I would bet that it does not include teaching six-, seven-, and eight-year-olds about sexual orientation,” he said. “This is outrageous. This is unbelievable. This is just wrong.”

The bill is unlikely to pass the Democratic House this session or the Democratic Senate, and President Joe Biden would not sign it into law. It’s unclear how much support Van Drew has even from his fellow Republican lawmakers, since he even says that his bill is “in response to these radical policies being put forth by the state of New Jersey,” and Republicans from other states are unlikely to share his beef with his own state.

Van Drew has a 76 rating on HRC’s Congressional Scorecard. In 2019, he voted for the Equality Act, which would add sexual orientation and gender identity to federal civil rights legislation, as well as an amendment to end Trump’s transgender military ban.

He was a Democrat at the time, and he later switched parties. He voted against the first impeachment of Trump and became a Republican when he realized that he would lose Democratic support in his district and needed Republican voters.

He announced his switch in December 2019 and said that Donald Trump had his “undying support.”

How I learned to love graffiti. Sorta.