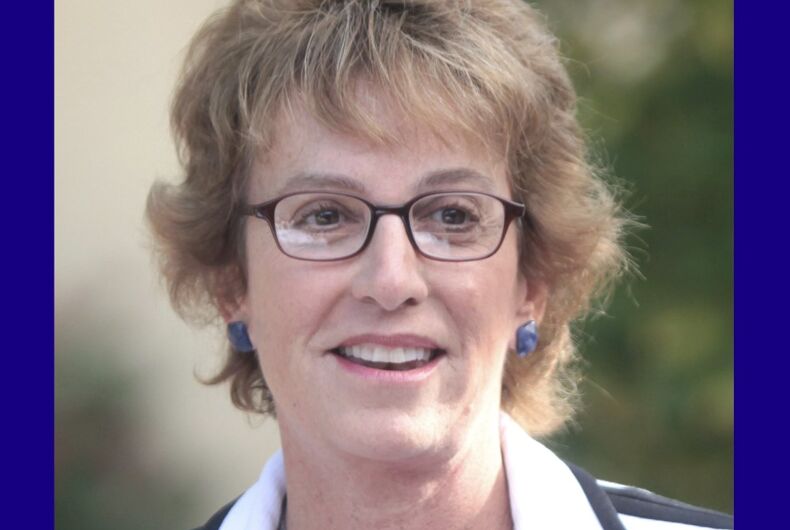 The Arizona Senate is investigating anti-LGBTQ extremist state Sen. Wendy Rogers (R) for claiming that the racist massacre in Buffalo, New York was staged by the FBI.

“Fed boy summer has started in Buffalo,” Rogers wrote on the rightwing social media platforms Gab and Telegram shortly after the shooter killed 10 people on Saturday, effectively saying that the FBI was conducting a false flag operation.

Her comments got hundreds of likes on the platforms, according to the Phoenix New-Times, but sparked outrage. Conservatives have often claimed that mass shootings are staged, partly because mass shootings are an indictment of the promotion of hatred against women and minorities and lax gun regulations that conservatives support.

The shooter in Buffalo – who shot 13 people, 11 of whom were Black – allegedly wrote a letter full of racist sentiment about “white genocide” and “great replacement theory,” the conspiracy theory that powerful people (often Jewish people) are replacing white people with people are color in the U.S. The idea got national attention when white supremacists chanted “Jews will not replace us” at the 2017 Charlottesville, Virginia rally.

The same ideas are promoted by white supremacist Nick Fuentes, and Rogers has spoken at his “America First Political Action Conference” event. Rogers is associated with the anti-government militia Oathkeepers, a group described by the Anti-Defamation League as “heavily armed extremists with a conspiratorial and anti-government mindset looking for potential showdowns with the government.”

“Of course, I condemn the violence in Buffalo. Who doesn’t?” Rogers wrote on Monday as she got national attention for her comments. “I also condemn the #FakeNews and the government promoting violence and then blaming it on regular patriotic Americans as if regular Americans share those despicable views. Everything is not what it seems!”

Yesterday afternoon, the Arizona Senate voted to open an ethics investigation into Rogers’s comments, even though Republicans control the chamber. It passed nearly unanimously.

Her critics say that she has promoted the great replacement theory in the past. “We Americans who love this country are being replaced by people who do not love this country,” she wrote on Twitter in 2021. She added that she wanted to “make Western civilization great again.”

Rogers also has a long history of extreme anti-LGBTQ rhetoric. Last October, she tweeted that “Superman loves Louis [sic] Lane. Period. Hollywood is trying to make Superman gay and he is not,” in response to a comic book where Clark Kent’s son Jon Kent is portrayed as bisexual. She then said that Superman should be called “Thooperman,” a gay lisp joke.

Rogers also introduced a bill to put doctors in jail for up to three years if they prescribe hormones to transgender minors, despite evidence that hormones are an effective way to alleviate gender dysphoria for transgender people. That same bill would have required teachers and schools to out transgender students to their parents.

She proposed another bill to ban transgender students from participating in school sports. That bill would have also mandated a medical review of a student’s anatomy, hormone levels and genetics if the student’s biological sex is disputed while seeking to participate in sports programs at public and private schools, community colleges and state universities.

Alex Jones of the streamed show Infowars has faced defamation lawsuits for saying that the 2012 Newtown, Connecticut school shooting was a false flag operation so that the federal government could justify increased gun control measures.