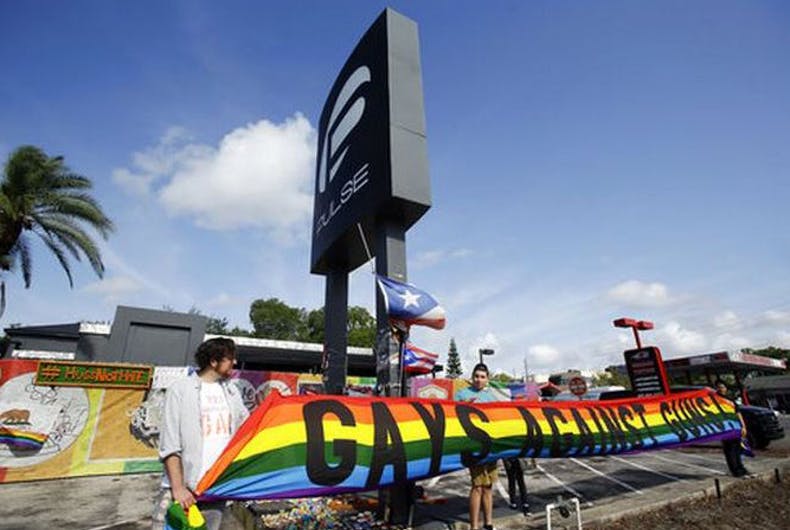 Activists hold a banner in front of the Pulse nightclub site after a news conference, Thursday, May 4, 2017, in Orlando, Florida.Photo: AP Photo/John Raoux

Following each high-visible episode of gun violence in the United States, politicians and other community and national leaders spout their often-repeated worn-out platitudes and false claims regarding the actual causes of this lethal epidemic plaguing the country. Their words all-to-often result in the silencing of the root causes of the problem.

“Sending my best wishes and prayers.”

Of course, people of goodwill and compassion express this sentiment to people and communities suffering trauma and grief. This can help to begin the often-long healing process at a time of unfathomable tragedy by providing essential solace to survivors. It also gives those of us who feel powerlessness during these occasions at least a limited sense of standing with others.

This expression, though, falls far short of a solution, which morphs into mere platitude when those in positions of power fail to work toward real solutions.

“This is not the time to talk about politics.”

After virtually every firearms-related slaughter, a common pattern has emerged: when advocates rightly raise issues of safety regulations, politicians retreat to their deflective tactic of reciting that “now is not the time.”

Moments pass leading to the next political issue (for example, healthcare or storm disaster relief) pushing gun violence out of the headlines as action is not taken, then the next high-visibility gun massacre blares out, and politicians again claim that “now is not the time,” and the cycle repeats ad infinitum.

“It’s about better securing our schools.”

When politicians make proposals for reducing gun violence, especially in our schools, they suggest such methods as installing metal detectors, self-locking building entrances, constant and updated emergency drills for the entire school population, and training for staff, teachers, and administrators.

Increasingly, policymakers advocate for adding to the number of armed security monitors and even arming teachers and administrators as “first-line” defenders.

This latter tactic follows National Rifle Association (NRA) CEO Wayne LaPierre’s argument that “The only thing that stops a bad guy with a gun is a good guy with a gun.” In fact, the NRA produces stickers and hats inscribed with the motto: “Guns Save Lives.” But is this true? Several studies show the opposite.

Charles Branas, the lead researcher in a University of Pennsylvania study concluded that by arming people as a defensive measure, “There was an expectation that we should surely find a protective value. [But having a gun] on average was found not to be protective in assaults….Although successful defensive gun uses can and do occur, the findings of this study do not support the perception that such successes are likely.”

In another research study, the Harvard School of Public Health found that contrary to many claims, the chances of violence increased in homes with a gun. Branas, in their study, concurred, writing, “[T]here is no credible evidence of a deterrent effect of firearms or that a gun in the home reduces the likelihood or severity of injury during an altercation or break-in.”

What proponents of this simplistic and disastrous gun-on-gun philosophy fail to realize in their obsession with the so-called “freedom” to bear arms is that it is not only “criminals who kill people.”

Having augmented numbers of armed school personnel increases the risk for accidental injury and death while offering no guarantees of stopping acts of violence. Fighting fire with fire results in hotter and quicker-moving blazes.

Actually, people with guns kill people more often and at significantly higher rates than people who don’t have guns.

While this is certainly the case in some specific instances, the clear majority of people with this diagnosis do not manifest violence, and specifically, they are not the primary perpetrators of firearms-related injury and death to others. Rather, they are more often the victims of harassment and violence.

Politicians are merely scapegoating an entire group of people rather than acknowledging the real causes. And while these same politicians call for increased support systems for people with mental health issues, Republicans in Congress have voted to reduce support.

On the issue of keeping guns out of the hands of people with emotional and mental health problems, in December 2016, the Obama administration released policy guidelines mandating that people receiving Social Security payments for severe mental illnesses and those found incapable of managing their finances undergo FBI’s National Instant Criminal Background Checks if they request to purchase a weapon.

Congress, however, overturned the policy, mostly on party lines. President Trump signed the measure into law one month after taking office even though following every mass shooting, he refers to these instances as a “mental health problem” as he did again after 17 students and their teachers were killed in Parkland, Florida.

In fact, however, reports from the American Psychiatric Association show clearly that mass shootings by people with serious mental illness represent less than 1% of all yearly gun-related homicides. In addition, research from Columbia and Duke Universities found that “only 3-5% of violent acts are attributable to serious mental illness, and most do not involve guns.”

“Fatherlessness in homes of boys and young men”

Another cause has gained currency on the political right: fatherless homes. Susan L. M. Goldberg, for example, argues, “Issue number one that no one in the mainstream media or government wants to acknowledge: fatherlessness. Specifically, the impact of fatherlessness on the boys who grew up to become school shooters.”

By implication, the right is asserting that either, women-headed households are inferior to those that are male-headed, and, ironically, that a family headed by two fathers in partnership is the best – though they have heartedly disputed this.

In the over 50,000 shooting incidents in the United States in 2015 alone, including approximately 372 categorized as “mass shootings” of four or more victims, men, mostly white men, committed the overwhelming majority.

And murder is primarily a male act in 90% of the cases when the gender of the perpetrator is known. In mass shootings, 98%+ are committed by males. In 2018, 340 mass shootings were recorded in the United States.

But regulations on firearms challenge the promises of a patriarchal system based on notions of hyper-masculinity with the elements taken to the extreme of control and, of course, never having to ask for help or assistance. Concepts of cooperation and community responsibility are pushed to the sidelines or often discarded. This, connected to the easy legal access to firearms, presents a recipe for disaster that has played itself out so many times in the United States that it has become routine.

The causes for the plague of gun-related murders holding grip on our nation, nonetheless, are multifaceted and complicated, but not for the reasons articulated on the right. When they mention causes and solutions, they rarely bring up the words “guns” or “firearms regulations” other than to discount and reject the cause and effect relationship.

The primary distinction separating the United States from other wealthier highly industrialized countries around the world that boast extremely low rates of gun deaths and injuries, in fact, murders overall by any means, is our nation’s disastrous addiction to guns and resistance to laws meant to regulate them.

If not, does the United States have so many more cases of mental illness, diagnosed or not? Are schools in the United States significantly “softer targets” than schools, for example, in Australia, Japan, or Sweden? Do boys and young men come from “fatherless” homes at radically higher rates than in these other countries? And why are we not seeing similar violence-prone behaviors in girls and young women from motherless (or fatherless) homes?

And why don’t people on the right talk more often about what effects the fathers who remain in the home, but who inflict abuse on family members, have on the behaviors of these members?

As with all large-scale social problems, we miss the key causes and solutions when we focus solely on individualized cases instead of viewing the essential systemic issues.

The major underlying cause by far for the U.S. having the highest rates of firearms deaths and injuries in Western “democracies” is the unprecedented number of these weapons, their relatively easy accessibility, and the lack of political courage by our elected offices to take decisive action by placing common-sense safety regulations on the sale, use, capacity, velocity, and amount of guns in private ownership.

Why do politicians continue to deny the issues revolving around the virtually unrestricted availability of firearms, some reaching military-grade capability, as the prime reason for the epidemic of gun violence in the United States? While the answer is detailed, I present a quick and appropriate glance at the problem:

Senators bought by the NRA:

And these are just some of the largest recipients of blood money.

Send a message to Ted Cruz, Mitch McConnell, and the rest of the Senate Republicans to stand up to the gun lobby if they care about saving lives:https://t.co/dcIc1ZYWYi

What it means to identify as neutrois