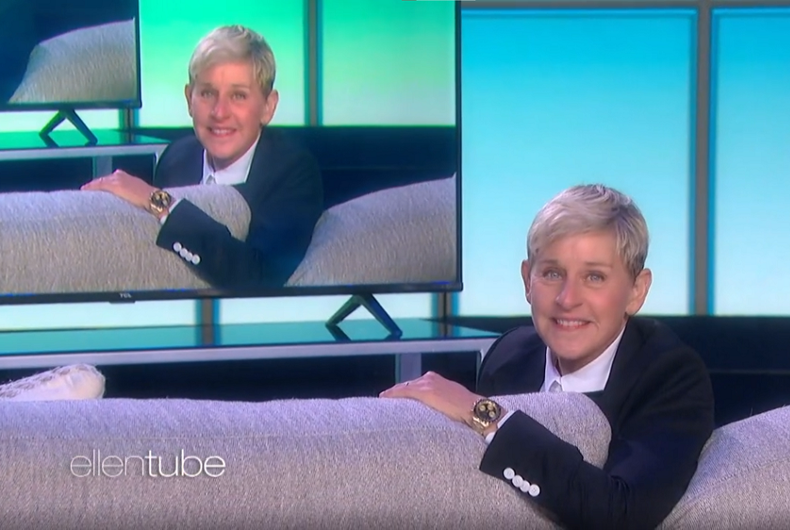 Ellen DeGeneres ended her daytime talk show after 19 years on the air yesterday with guests Jennifer Aniston and P!nk.

“I said it at home a lot,” she joked. “What are we having for our gay breakfast? Or pass the gay salt. Has anyone seen the gay remote, things like that.”

“Twenty-five years ago they canceled my sitcom because they didn’t want a lesbian to be in primetime once a week. And I said, ‘OK, then I’ll be on daytime every day. How about that?'”

Aniston, who was a guest on Ellen’s very first episode in 2003, introduced a montage of some of the highlights of the show’s almost two-decade run.

P!nk gave Ellen gifts to start her life as a retired person, including sour dough starter, bird-watching glasses, and yarn for knitting. Ellen immediately used the birdwatching glasses to check out Aniston’s cleavage.

She then sang “What About Us.”

Ellen ended the final episode of her daytime talk show by thanking her producers and her audience.

“To all of who who have watched this show and supported me, thank you so much for this platform,” Ellen said. “And I hope that what I’ve been able to do in the last 19 years has made you happy and that I was able to take a little bit of pain away from a bad day or anything you’re going through.”

“If I’ve done anything in the past 19 years, I hope I’ve inspired you to be yourself, your true, authentic self,” she continued. “And if someone is brave enough to tell you who they are, be brave enough to support them, even if you don’t understand.”

Pastor tells city council that gay people should be slaughtered