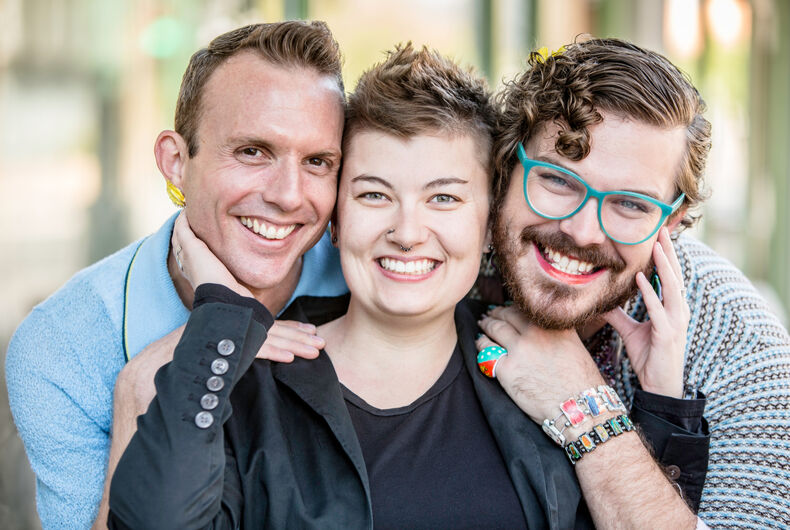 When I was 24, I moved back to New York City after a few months away. That move was one of the more terrifying and foolish things I’ve ever done — I had $150 to my name when I drove from South Carolina to the big city, most of which I spent on gas and tolls. The only reason I survived those first six months in the city while getting my feet under me with a job was because of the generosity of my good friends, who sent me money for medication and food and even let me crash on their couches.

The people who supported me during that financially and emotionally difficult time aren’t my family in any legally-recognized way, but they are in all the other ways that matter. They are my found family.

Related: Portia de Rossi thought she killed her 99-year-old grandmother when she came out

It’s been four years since those early terrifying days in New York, and a lot about my life has changed; for one, I came out to myself and others as bisexual, and have been embracing my newfound queer identity more and more. In many ways, the found family I had in 2018 looked wildly different from how it does today. It has expanded to include a host of other queer people I’ve met online and in person, and it’s the importance of queer found family that sticks out to me today.

Without my queer found family, I think I would still absolutely be floundering about in a state of not knowing who I am and trying to hide my identity.

For my friend Naseem Jamnia, a nonbinary queer writer, found family has been important because queerness wasn’t widely accepted when they were growing up.

“Growing up in spaces where queerness was not normalized means that you have to … be careful,” they said. “It was hard finding people who would accept it outright.”

So growing up and into their own queerness, Jamnia has come to rely on their queer found family. They also pointed out that many of their childhood circle of what they would now define as “found family” eventually also came out as queer: “we find each other, our own people, even without the language to express it,” they said.

“We don’t get to choose our first families, so we don’t get to choose whether they are loving, kind, understanding people,” Negrón told LGBTQ Nation. “For queer people, that often means our first families are the first to reject us when we reveal our true selves. Found families are the way we get the community the care each of us needs, from people we curate based on our own needs, standards, and boundaries.”

Mother’s Day is today in the US, and I’m painfully aware of the fact that many queer people of all ages don’t have mothers (or other caregivers who raised them) who accept them. So what are they to do on holidays like this one, that seems tailor-made to remind them of their loss?

Jamnia said to practice self-care and make space for grieving if that’s what you need to do.

“It is okay to mourn and to grieve not having that familial relationship, blood-wise,” they said. “The internet says to be positive, but holding space for your grief can be just as cathartic and necessary.”

While you’re taking space to grieve and practice self-care, it’s also important to celebrate the family you do have — your found family. I am a massive, unrepentant people person, so to me celebrating means spending time with my loved ones, whether that’s in person or virtually if they live further away. I also believe in the power of words to change lives, even when the words are as seemingly small as just saying, “Hey, I’m thinking of you because I love you.”

One of my other queer friends, Shelly Jay Shore, has told me to my face that they would be my queer mom or dad if I needed it, and I know they’ve posted similar things online, especially on days like Mother’s Day or Father’s Day.

“I think a lot of people think it’s a total joke, but I’ve had people reply or DM me after those tweets just to ask for a bit of time or reassurance that they’re loved and they matter,” Shore said, “so I think one tip is really to just take advantage of the queer elders who are making themselves safe spaces.”

Negrón shared that their advice for handling Mother’s Day if it’s difficult is to give yourself permission to simply…not.

“Do what feels right for your loved ones, when it feels right,” Negrón said. “Consider ‘Mother’s Day the same way you’d consider a holiday from a religion you don’t practice — best wishes to those who celebrate and a respectful pass.”

Shore added that celebrating yourself is pivotal.

“If Mother’s Day is hard for you, take the day to celebrate yourself,” she said. “Treat yourself kindly, do something nice for yourself. If you want to be a parent someday, maybe journal a bit about the kind of parent you want to be — whatever that looks like for you. I think that’s really the core of queer found family in general — we’re all just trying to make the world better for the kids who come after us, however we can.”