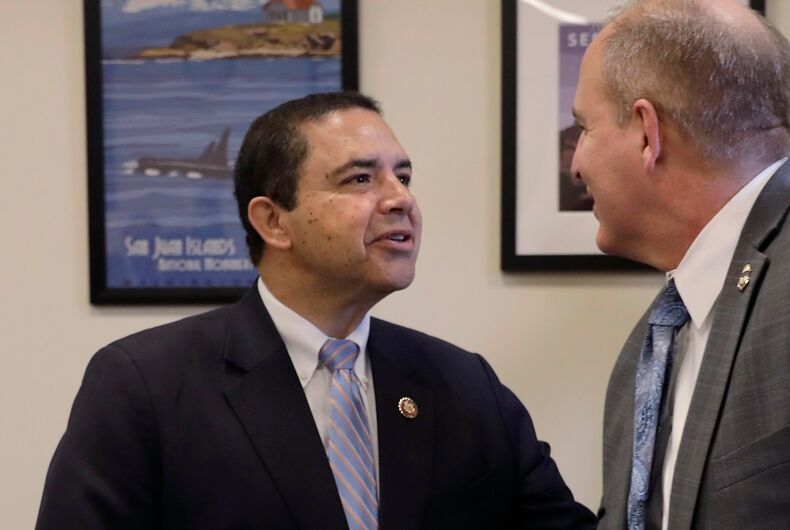 An anti-choice Congressman fired a staffer after she requested maternity leave and had other employees write poor job performance reviews about her so that he could justify the firing.

Rep. Henry Cuellar (D-TX) fired his acting chief of staff Kristie Small after she told him she was pregnant and requested maternity leave via email. Cuellar responded that they would need to talk about the 90-day probationary period for all new hires, something that Small said she never heard of and wasn’t mentioned in the employee handbook.

Small emailed in August, and by October of that year, she was fired over the phone. Cuellar told her that she was being fired because she got poor performance reviews, but the federal judge in the discrimination lawsuit that Small filed said that Cuellar “solicited written statements from his staffers about Small’s performance after he fired her… And the staffers provided their statements after Small filed this action in May 2019.”

Small was 28-weeks pregnant when she was fired and she delivered her baby early at 30 weeks in a stillbirth.

“Perhaps Cuellar was simply looking for corroboration of Small’s poor performance, but a jury might also see this as an attempt to collect post hoc justifications,” Judge Trevor McFadden wrote in an opinion while refusing to dismiss the lawsuit against Cuellar, Jezebel reports.

Cuellar is the last anti-choice Democrat in the U.S. House of Representatives. He was the only Democrat to vote against a bill to codify the right to an abortion, a bill that was voted on after Texas’s notorious anti-abortion law that allows people to sue for a $10,000 bounty went into effect last year.

In 2019, he voted for an amendment to a budget bill that would allow the Trump administration to form a “Division of Conscience and Religious Freedom” at the Department of Health and Human Services. HRC said that the division was “designed to empower health care providers to refuse service to LGBTQ people and people needing reproductive care.”

In 2015 Cuellar voted for a bill to ban abortion after 20 weeks. And he wasn’t just trying to represent his district; Democrat Hillary Clinton won his Texas district by 20 percent in 2016.

Anti-choicers generally justify their position by claiming that they want to help babies and women. But instead of supporting pregnant people and those with young children, Cuellar allegedly had staffers write letters about how Small failed to catch typos in press releases or arrived late sometimes to work. One letter said Small was looking for a new daycare for her toddler and another said that she asked to leave the annual Taste of Laredo event early even though it’s “very important to the Congressman and office” so that she could care for her daughter.

The court said that Cuellar asked staffers to write the letters after Small was already fired in her third trimester of pregnancy, and several of them were dated after Small filed her lawsuit in May 2019.

Small was hired in June 2018 after working in another Democrat’s office for 13 years without any issues.

Cuellar is facing a primary challenge by Jessica Cisneros, a human rights lawyer. The election is on May 24.

Cuellar and Small are not commenting on the litigation.

Dolly Parton teams up with Taco Bell to appear in “Mexican Pizza: The Musical.” Yes, really.