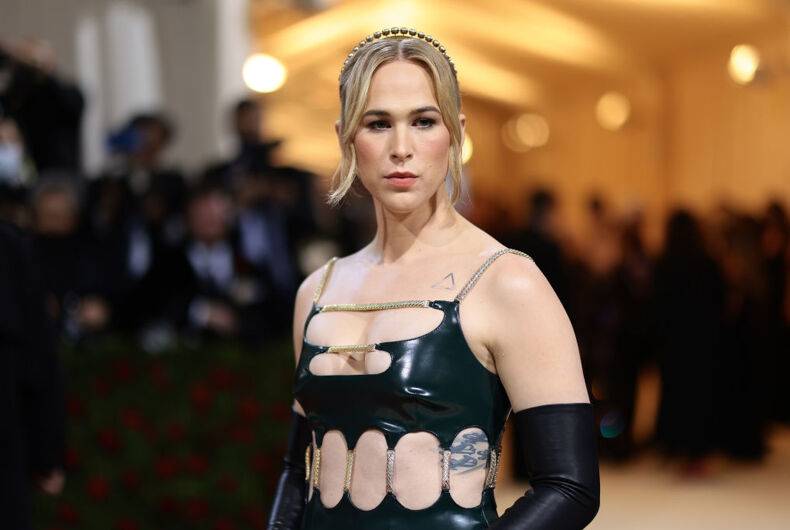 Out trans actress Tommy Dorfman made her Met Gala debut last night in a stunning green rubber dress and an eye-catching accessory with a positive message.

Dorfman is perhaps best known for her role in the Netflix series 13 Reasons Why, and she came out as a transgender woman in a Time magazine interview last July.

Related: Elliot Page walked his first red carpet since transitioning & his outfit was the talk of Twitter

She attended the Met Gala in New York City last night, one of the biggest fashion moments of the year whose theme this year was “Gilded Glamour and White Tie,” referring to the late 19th century. Dorfman’s Brandon Blackwood dress was green with gold, a nod to the massive wealth inequality of the era.

And with that dress she had a handbag with a message: Protect Trans Kids.

“I used to come to the Met all the time in college,” she told Vogue. “I studied at Fordham University on the Upper West Side, so this was my between-class lunch spot.”

“I also grew up watching Gossip Girl, so the steps of the Met are probably one of the more formative pieces of New York architecture that I’ve ever seen.”

Dorfman said that she was happy that the theme was about the Gilded Age.

“I’m deeply obsessed with the Gilded Age, so for this to be my first Met feels like a beautiful alignment. I love anything cinched, corseted, and to the floor,” she said.

“For a year now, I have been privately identifying and living as a woman – a trans woman,” Dorfman said while noting that her “coming out” wasn’t really necessary since she had been posting photos of her transition regularly.

Other LGBTQ stars and allies attended the Met Gala, including Janelle Monae and Mj Rodriguez.