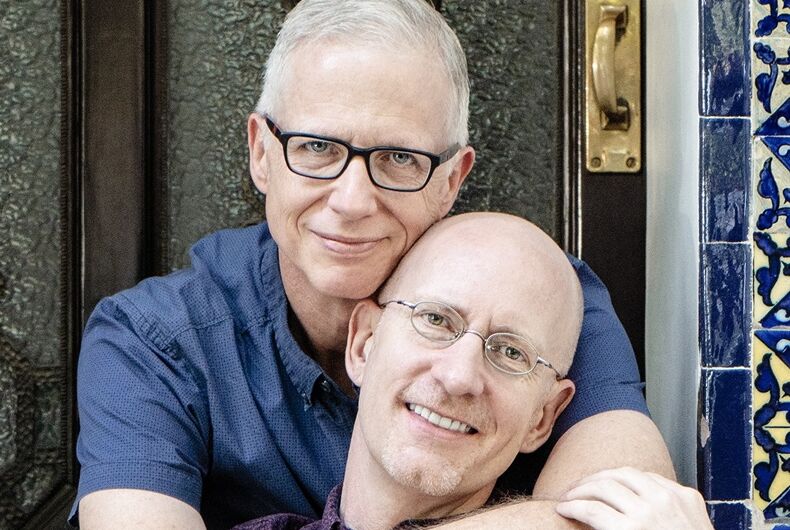 Take a look at the picture above. Do Michael and I look alike to you?

But honestly? I don’t think we look anything alike. Michael has a full head of silver hair — and I’m bald. Michael is at least three inches taller than I am.

And yet, as we travel, I’ve literally lost track of the number of times people have mistaken us for brothers. People often — often — even assume we’re twins!

Here’s the explanation I’ve come up with for why this happens: it’s unusual for two middle-aged men to be traveling together, especially if we’re sharing a room. If we’re in a country or culture where out same-sex couples are unusual or non-existent, people search for a label to apply to us. “Brothers” is the best explanation they can come up with that makes sense to them.

Plus, we act very comfortable and familiar together, like, well, brothers.

In fact, we’ve found the world to be far more gay-tolerant than we expected, even in countries known for LGBTQ bigotry.

Then again, we’re relatively wealthy Westerners, and the locals in most countries have a financial interest in treating us well. Things are often very different for resident LGBTQ people.

We’re also men, who don’t have to deal with sexism, and we’re conventionally masculine, which means we can easily maneuver in cultures with more traditional gender roles.

We also try to do our due diligence before going anywhere, and we always approach travel with the idea that we’re guests in the places that we visit. That means we try to learn about and respect local customs and values — within reason, of course.

But this doesn’t mean there aren’t still challenges to travel while being LGBTQ.

For one thing, something serious probably will go wrong at some point in our travels, and we’ll have to deal with the local authorities and/or police.

If it’s obvious we’re a gay couple, and there’s some kind of dispute, will the authorities take our side? If the problem involves homophobia, might the authorities even take the side of the bigot?

Then there’s the general discomfort of constantly having to decide whether or not to come out — and exactly how “out” we want to be in any given situation.

When we were living in Tbilisi, Georgia, we decided to hire a driver to take us and some friends on a road trip into neighboring Armenia for three days. The deal was the driver would supply the car and his expertise, and we would pay him a fee — and also pay for his food and lodging along the way.

But when Michael was making the arrangements via text, he asked me, “Do you think I should tell the driver we’re gay?”

“Why would you do that?” I responded.

“Well, we’re all going to be together in his car for three days. If he’s got an issue, I’d rather know now than once we’re in Armenia.”

“Don’t tell him,” I said. “That seems weird. ‘By the way, we’re gay’? He’ll probably be more freaked out by that than anything.”

“But if I don’t tell him, then it’ll come up during the trip. And how weird would that be? We’re all staying in the same hotels. He’ll see you and I are sharing a bed.”

This was a very familiar conversation — the kind of thing Michael and I discuss all the time. I’m generally more cautious than he is. And in this particular case, the driver had come with a very reasonable price and a strong recommendation from someone we knew. I really didn’t want to lose him, and I said so.

“What if he asks us directly?” Michael asked me.

I could tell Michael didn’t agree with me, but he went ahead and booked the driver without mentioning our being a couple.

And a few weeks later, when we finally met the driver in person, literally the first thing he said, once we were all settled into his car, was, “So, Michael, are you married?”

I was sitting in the back seat with our two friends, which was a good thing because I was pretty sure Michael wanted to strangle me. He lied and told the driver he wasn’t married, just like I had instructed, but even that didn’t help matters. For the next three days, our driver repeatedly peppered Michael — and only Michael — with questions about his love life.

During those three days, I was also very aware how often LGBTQ issues — or details about Michael’s and my relationship — came up in casual conversations with our friends.

By the time we returned to Tbilisi, our driver must have figured out we were a couple. But whether he had or hadn’t, Michael was right: we should have told him in advance.

Still, who needs all that stress?

Then there’s the fact that, safety issues aside, we genuinely want to be out. It’s undignified and humiliating to have to pretend you’re someone you’re not.

And, frankly, we’re from a generation where we’ve always seen our being out as a political act — about yourself but also about a greater “cause”; younger generations seem to see it as more about individual expression, but that’s cool too.

Either way, visibility matters. In homophobic countries, it matters even more. By being out and proud, we can act as role models for younger LGBTQ folks, and we can confound the stereotypes or misinformation that straight people might have about us.

But that’s complicated too. When we lived in Istanbul, Michael got to know the man who ran the bakery near our apartment.

In his regular chats with the man, Michael revealed the details of his and my travels, and the two of them shared social media profiles. But Michael was always unsure how this traditional Muslim family man might react if Michael specifically referred to me as his “husband.”

Which is precisely the point. For me, the best part of our travels has been the connections I’ve made with all the people I’ve met along the way.

But in more conservative countries, being gay — and feeling anxious how people might react to that fact — makes those connections more difficult. How close can you get to someone if you can’t be honest about something so basic about yourself?

On the other hand, sometimes being gay has made those connections even deeper.

That Turkish baker Michael met? Not long after we left town, the baker “liked” a picture of Michael and me being affectionate on social media.

An ever better example came in Vietnam, where we lived several years ago. Michael and I joined a local co-working space, which was run by a Vietnamese woman.

Michael does the grocery shopping in our family, and he also knows that I liked the fruit smoothies made by a vendor there. So every time he made a trip to the local market, he would pick up a mango smoothie for me and stop by the co-working space on his bike to drop it off on his way home.

Before long, the Vietnamese woman began to notice, and she would smile every time Michael delivered me another mango smoothie.

Finally, one day the woman said to me, “You two are a couple, yes?”

I was surprised she’d said this out of the blue, and it made me a little nervous. I knew this woman hadn’t traveled much, and I suspected she didn’t know many out gay people.

But I nodded and said, “Yes. We’ve been together twenty-five years now.”

“He is very loving,” she said. “You are very lucky. You are both loving to each other.”

At that, I couldn’t help but blush. I wasn’t so sure about my always being loving to Michael, but I could absolutely agree with the other part.

And so I laughed and said that. “Well, you’re definitely right about Michael.”

She shook her head. “No. I watch, and I see. You are one of the best couples I’ve ever met.”

I loved that she’d been observing us and had come to such a nice conclusion. Now, more than anything, I felt seen. “Well, thank you very much. That’s one of the nicest things anyone has ever said to us.”

“I am just saying the truth.”

It was another one of those elusive but wonderful travel connections. And if I wasn’t gay — and if Michael wasn’t such a thoughtful person — it might never have happened at all.

A woman sued after a cop forcibly baptized her. Now she’s dead.