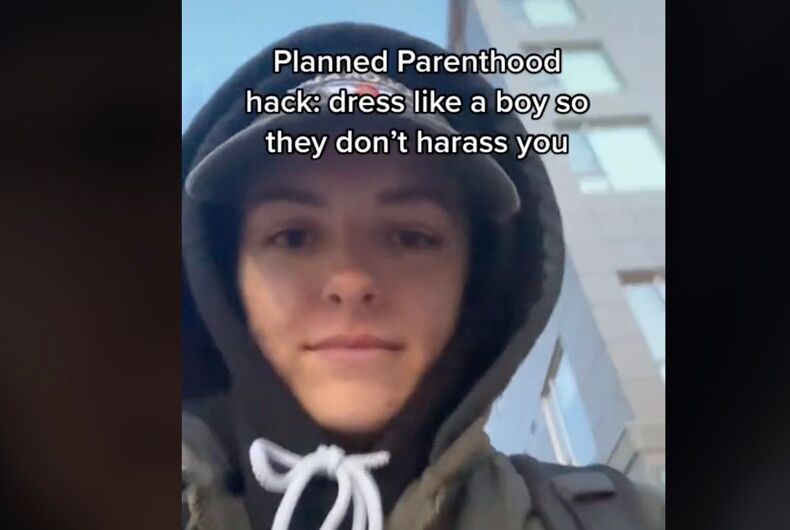 A woman has gone viral on TikTok for sharing her “Planned Parenthood hack” of dressing like a boy to avoid being harassed by anti-abortion protestors.

In the video, the TikToker named Kellie records herself disguised in “boys” clothing walking past a group of protestors who completely ignore her.

Related: Transphobic gays shocked to learn that their conservative allies are anti-gay

She clarified in the comments that she didn’t enter the building and was just walking by. “but i’d imagine it works for those entering it too,” she added.

The video has been viewed over 2 million times, with many commenting on the intelligence of Kellie’s tactic, but also how sad it is that it’s necessary.

Others shared their own stories.

“when i went to get an iud and the PROLIFE ppl were shouting DEATH threats at at me,” one user said.

“I do this generally when I’m going somewhere alone and don’t feel safe enough to be girl,” said another.

“literally got kicked in the back one time walking into a Planned Parenthood in Providence when I was at college,” a third added.

Many commenters also pointed out that Planned Parenthood offers far more than abortions and that many people who protestors harass are visiting a clinic for routine reproductive health care.

“Ours does not even do abortions. None in our area do. They are literally a low cost gyno helping people who can’t afford a baby not get pregnant,” someone noted.