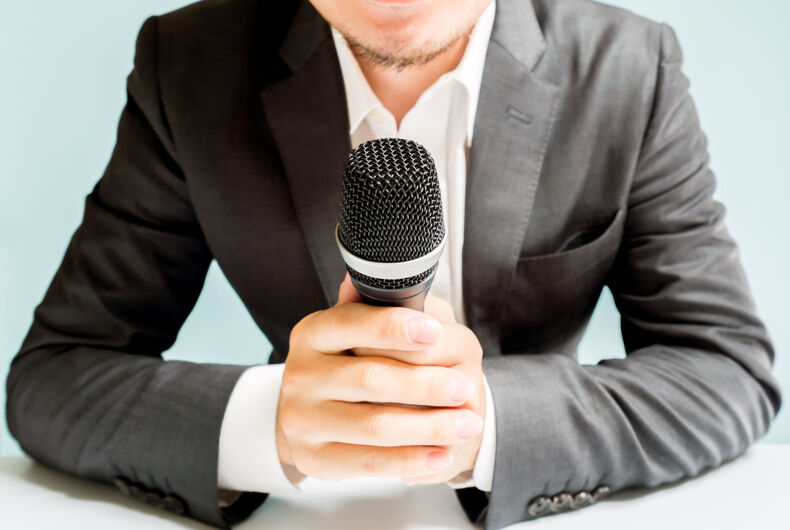 This week on Twitter, LGBTQ allies spoke out against the ongoing crisis facing queer and trans youth. Some efforts were more successful than others.

Related: Florida tells parents to force their trans kids to dress as their sex assigned at birth

NPR host Peter Sagal (of “Wait Wait Don’t Tell Me”) used his Twitter feed to educate in two different ways. First, he shared a Daily podcast episode about a transgender boy and sought responses from people who are “anti-trans.”

The following day, he handed his feed over to trans people and their caregivers.

So today, I want to do something different: I'm going to hand this feed over to people who are either trans themselves or parent/guardians of trans kids. Reply to this thread and I'll RT you. But there are rules:

Journalist Kit O’Connell chimed in with a thread full of context on the current crisis.

Just so you feel the vibes of things in #Texas right now for #trans folk, I interviewed the mother of a nonbinary adolescent this week. The kid's teacher, in front of the whole class, announced that the reason they're trans is because they've been groomed by their queer parents.

Other trans adults shared their experiences and support for trans youth.

I'm 34, and long story short, didn't start any sort of social or medical transition until two years ago. It gives me so much joy seeing kids who know themselves in ways I didn't who will be able to build memories as themselves that I couldn't.

After Sagal’s experiment had come and gone, it was time for celebrities, politicians, and companies to show their support for the annual Day of Silence. Some clearly used the GLSEN provided template. No shame in that, if few points for creativity or authenticity.

Tomorrow is @GLSEN #DayOfSilence to protest the erasure & silencing of LGBTQ+ students. This moment of silence will speak loudly 🌈 https://t.co/G4iIAXweRH – Team Sia pic.twitter.com/3JJu455NYU

Wisconsin Rep. Gwen More told LGBTQ+ students that she has their backs.

On this @GLSEN #DayOfSilence, I’m lifting up #LGBTQ+ students and standing up against hate, bullying, and discrimination – whether it’s happening in schools or state legislatures across the country. #LGBTQ+ students will always have my love and support.

And Florida Rep. Darren Soto urged his colleagues to join him in recommitting themselves to the cause of LGBTQ rights.

On the annual #DayofSilence, I join my colleagues to stand with LBGTQ+ students in protest against the discrimination and harassment they face.

Amid attacks against LGBTQ+ youth across the nation –– including in our own state –– we recommit ourselves as allies to the cause. 🏳️‍🌈🏳️‍⚧️ pic.twitter.com/KXvV1CLEuv

Out California Rep. Mark Takano even introduced a Day of Silence resolution.

I introduced a resolution to establish today, April 22, as a National Day of Silence. This day is meant to show solidarity with LGBTQ+ individuals that often feel like they have to be silent.

Thank you @CBSLA for highlighting this important issue. pic.twitter.com/ns4mfttV88

While some accounts tweeted about Day of Silence on the day it occurred, a number of football clubs posted the day before with a vow to go silent on the day.

April 22nd is National Day of Silence and we will be taking part in the #DayOfSilence with @USLChampionship to raise awareness on the impact bullying and harassment has on the LGBTQ+ community in schools. Discrimination is never okay.

We'll talk to you all on Saturday. pic.twitter.com/tJmekCXRNy

The Detroit City FC included some ways to get more involved.

Tomorrow is the @GLSEN #DayOfSilence. To show solidarity and support for LGBTQ+ people everywhere, we will be taking part in the Day of Silence and not posting on our social media channels.

Here are a few ways you can get involved in our community: (1/2)#DCTID pic.twitter.com/MUXgk0PcTP

But some clubs that posted support are getting called out for also partnering with Chick-fil-A.

Our German Legend @DerSchattenwolf got together a list of all USL teams with Chick-fil-a sponsorship. Your team's and this league's #DayOfSilence is preformative activism at best. Demand better. Do better @USL_HQ. https://t.co/Tqm2zoR120 pic.twitter.com/DoMkZsAYbA

It is illegal to be LGBTQ in these countries