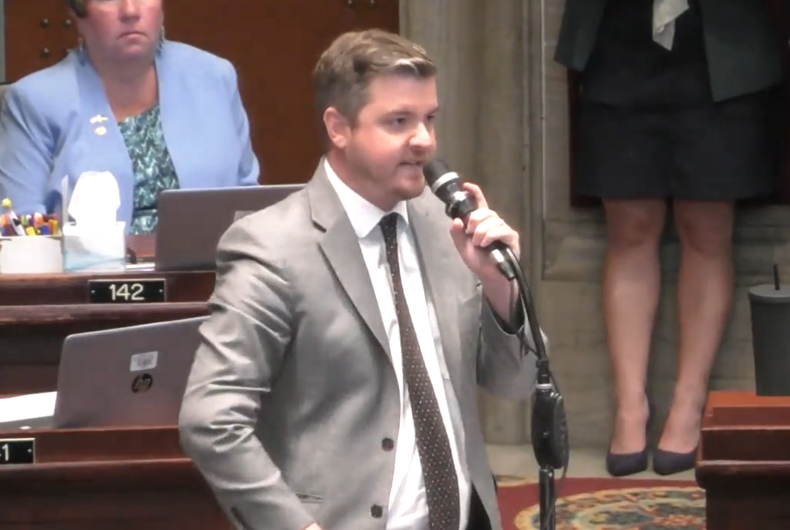 Gay Missouri State Rep. Ian Mackey called out State Rep. Chuck Basye  for his support of a bill that would that would allow school districts to discriminate against trans students.Photo: Video screenshot

Sometimes, it feels like the hits just keep coming. So we looked to LGBTQ Twitter to find some motivation and inspiration to keep us moving forward.

Related: This week in LGBTQ Twitter: Clapping back at Marjorie Taylor Greene’s transphobia

Julia Serrano speaks out on the so-called “transgender social contagion” and the tendency of some media outlets to refer to it like it’s something other than anti-transgender propaganda.

…and can we *please* make it a crime for any media outlet to mention "transgender social contagion" without including the context that this idea WAS LITERALLY INVENTED ON AN ANTI-TRANS PARENT WEBSITE! https://t.co/DsrYGI3vM1

Related link: Here are the 15 dumbest theories about what makes people transgender

College gymnast Mia Takekawa, who is competing at the NCAA Women’s Championships in Forth Worth, speaks out in support of trans athletes.

Competing at the NCAA Women's Gymnastics Championships in Fort Worth is the opportunity of a lifetime, and I'm thrilled to have the chance. But I'm also #FlippingExhausted that Texas lawmakers keep attacking transgender kids and their families. pic.twitter.com/6G7d9MrIjF

Gay Missouri Rep. Ian Mackey (D) called out state Rep. Chuck Basye (R) for his support of a bill that would that would allow school districts to discriminate against trans students. Mackey brought up his colleague’s gay brother, who Rep. Basye had previously described as being hesitant to come out to his family.

“If I were your brother, I’d be afraid to tell you, too. I was afraid of people like you growing up,” Mackey said. “Gentlemen, I’m not afraid of you anymore. Because you’re gonna lose.”

Trans activist (and Drag Race alum) Miss Peppermint tells it like it is in conversation with Sander Jennings, brother of trans rights activist and actress Jazz Jennings.

Trans children are caught at the center of a heated debate that aims to cast doubt on their families, support circles & identities. Being a transgender child is about self- expression not surgeries. Peep my conversation with @sander_jennings #ProtectTransKids #TransIsBeautiful🏳️‍⚧️ pic.twitter.com/TI06NaQpWx

It’s been a rough time for trans and nonbinary youth. I wanted to find a way to show them support and #letters4transkids was what I came up with. I hope you will join me by posting a message of encouragement to these amazing young people and tagging it #letters4transkids (1/7) pic.twitter.com/vVAyd0nis1

Letters are coming in from multiple sources including healthcare providers like Dr. Scott Hadland.

It’s been a hard time for trans & non-binary kids. 🏳️‍⚧️ Here’s a fantastic idea by @inafried. Let’s write youth letters so they know they are loved & affirmed, wherever they are. ❤️ #letters4transkids

Thank you, @inafried, for starting this beautiful campaign.

Here is my letter to every trans and non-binary kid out there today.

History will look back on this ominous attack of transgender & non binary people as a very dark time. Hateful attacks on just normal people! This idea to help support the most targeted members, the youth, is so important. Please join in when you have time. #Letters4TransKids 🏳️‍⚧️ https://t.co/9dQaXz2tF5 pic.twitter.com/xv0v3ayDqA

Something about the handwritten notes makes the message seem all the more personal. What’s your message to trans youth?