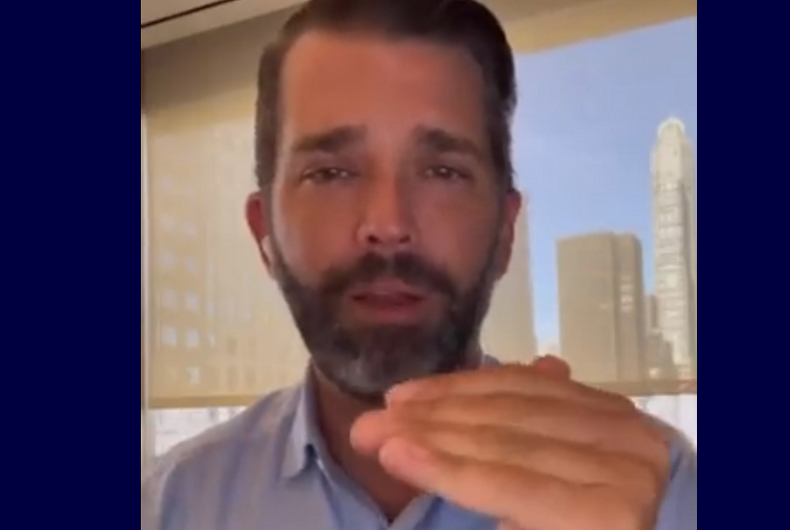 Donald Trump Jr. joined the chorus of Republicans accusing teachers and LGBTQ people of being pedophiles, and he warned his followers that not all of them have “blue, green, purple hair” and instead “may go under camouflage.”

Trump said, “It’s over for our kids, for their future, for their education” if teachers continue to talk about LGBTQ people in a video posted to social media.

“If you’re so desperate that you need to do this,” Trump said, referring to teachers, “you gotta think there’s a reason behind it.”

Instead of looking at the likely explanation that schools talk about LGBTQ people with kids – to help create tolerant learning environments, to counteract anti-LGBTQ bullying, to make the kids of LGBTQ parents feel accepted – Trump said that it’s pedophilia.

“And honestly, the only reason I can think of is that you’re literally trying to indoctrinate and groom these children,” he said.

“Grooming” is a set of manipulative behaviors sexual predators use to gain access to potential victims, to coerce them to agree to the abuse, and to reduce the risk of getting caught, according to the Rape, Abuse & Incest National Network. The process usually involves training the victims to keep secrets from adults they trust and desensitizing them to sexual talk and touching.

Trump went on to tell his followers that the supposedly “groomer” teachers were “easy to pick out and spot for the most part.” That’s not true for all of them, he warned.

“But you never know, some may go under camouflage not have blue, green, purple hair,” Trump said. “At least you can find them and see for yourself, but we need to do whatever we can to give parents the ability to pull their kids away from this nonsense.”

“Don’t jam this stuff down impressionable kids’ minds because, you know, you’re trying to break up traditional family structures,” he said.

Junior is back, and ranting about opponents of FL’s ‘Don’t Say Gay’ law: “You’re trying to indoctrinate and groom these children .. Let kids be kids. Let kids have their innocence. Don’t jam this stuff down impressionable minds!” pic.twitter.com/qwgu0V0UoU

Trump’s rant comes just after a report from Vice about how online conservatives are posting the contact information and addresses of school officials and teachers who they believe – often because of misinformation – are forcing children to be transgender or are otherwise “grooming” kids.

“This stuff isn’t going to change at this point until there’s body bags,” one member of a forum called Patriots.win wrote about a school that was accused of giving students puberty blockers without their parents’ consent. The accusation came from a false report on the conservative Christian website TownHall.

“Straight to the woodchipper for them,” wrote another.

“Fuck a woodchipper,” someone else responded. “If some teacher did that to my kid, I’m going to go straight to them and literally beat them to an inch of their life.”

The violent rhetoric and the paranoid accusations that pedophiles are everywhere come after years of the QAnon conspiracy theory flourishing in certain spaces on the rightwing internet. QAnon conspiracy theorists believe that there is a secret, international cabal of Democrats and celebrities who are engaged in child molestation.

“Using this type of false and misleading rhetoric has consequences,” said Daniel J. Jones, president of Advance Democracy, Inc. “We warned in early January 2020 that similar false conspiracy language around the 2020 election was spurring detailed discussions of attacking the U.S. Capitol. We now fear that we are going to see violent action — fueled by these false pedophilia claims – again.”