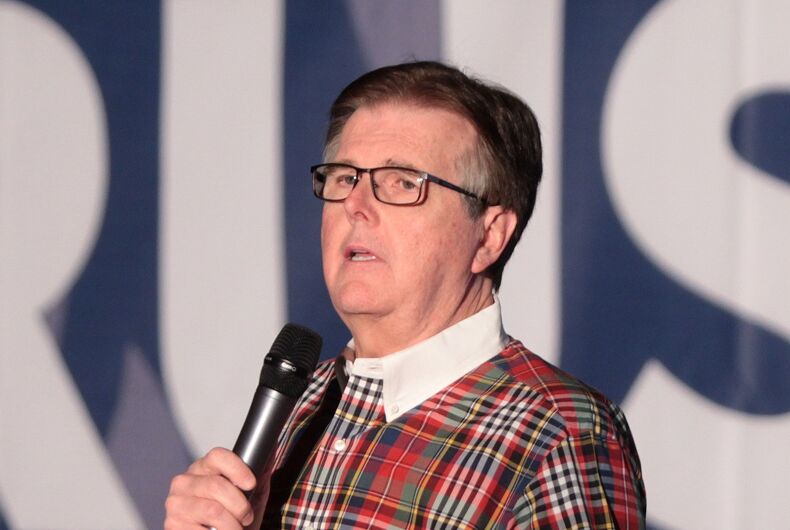 “I will make this law a top priority in the next session,” Patrick said in a campaign email that had the subject line “I AM DONE WITH DISNEY!” a reference to how the corporation stated that it opposes the Don’t Say Gay law in Florida.

The Don’t Say Gay law in Florida bans schools and teachers from discussing topics related to sexual orientation and gender identity in elementary school and limits discussions of those topics in older grades, while giving parents the right to sue school districts if they feel like the law has been violated.

LGBTQ organizations have already sued the state, saying that the law is so vague that it effectively bans any mention of LGBTQ people, which violates their rights. Supporters of the bill are just calling anyone who opposes the bill a pedophile.

New bills can only be added for the Texas legislature’s next session, which starts in January 2023, but Patrick said that the Education Committee can hold hearings on it this year to speed up the process next year.

In his email, Patrick told parents to boycott Disney to stop the company from “indoctrinat[ing] the children of America with their radical ‘woke’ views.”

“Gender expression by children is not something that is scary or harmful. What is scary is that political activists are grasping at power by overstepping into the lives of Texas families and education of students,” Texas Freedom Network executive director Val Benavidez said in a statement, calling Patrick’s promise a “stain on Texas.”

“While politicians use hate speech that is far from center to harm our vulnerable youth, we will continue to love our children and make sure that all families are uplifted in public life.”

The asexual community has a racism problem. Let’s talk about it.