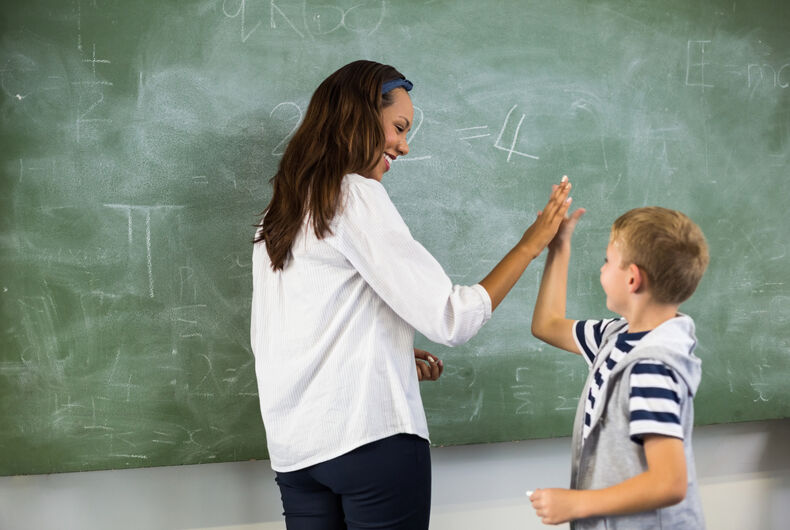 The far-right organization Moms for Liberty is freaking out because some teachers in Palm Beach County, Florida are allegedly refusing to use gendered language for straight, cisgender people in the wake of the Don’t Say Gay law, instead of just using the law to make LGBTQ people invisible.

“What will you do when this arrives home in your child’s backpack?” Moms for Liberty tweeted with a letter to parents they claimed was being used by teachers to comply with the Don’t Say Gay law. “Time to take a Stand.”

Related: Someone needs to sue Florida to stop the Berenstain Bears’ sexual indoctrination of children

Florida’s H.B. 1557, which people have been calling the Don’t Say Gay law, was signed into law last week by Gov. Ron DeSantis (R), and it prohibits teachers from discussing sexual orientation and gender identity in elementary school and requires the subjects be discussed in ways that are “developmentally appropriate” in higher grade levels. Under the law, parents are empowered to sue school districts that break the law.

While the Don’t Say Gay bill’s proponents have implied that talking about LGBTQ people is what the law means when it says sexual orientation and gender identity, nothing in the law’s text actually limits it to just discussions of LGBTQ people. So some teachers are allegedly taking it to its logical conclusion.

“To be in accordance with this policy, I will no longer be referring to your student with gendered pronouns,” the letter template states. “All students will be referred to as ‘they’ or ‘them.’ I will no longer use a gendered title such as ‘Mr.’ or ‘Mrs.’ or make any references to husband/wife in the classroom. From now on I will be using the non-gendered title ‘Mx.'”

“Furthermore, I will be removing all books or instruction which refer to a person being a ‘mother,’ ‘father,’ ‘husband’ or ‘wife’ as these are gender identities that also may allude to sexual orientation. Needless to say, all books witch refer to a character as ‘he’ or ‘she’ will also be removed form the classroom.”

Moms for Liberty claims that the template is really being passed around among teachers, but this could not be confirmed.

But what is real are people’s reactions to it.

Smart move by the teacher to protect themselves against law suits. https://t.co/gPuADmxhD8

I thought this is what people asked for? Everyone SAID they didn't want to teach kids about sexual orientation oe relationships, what did you expect teachers to do, let random parents sue all the time?

I guess you guys didn't realize that "heterosexual" is ALSO a sexual orientation, huh?

Have you noticed that groups with the word "Liberty" in their names usually want to be in charge of just how much liberty YOU should be allowed to have?

I would feel great if I got this! The far right wing radical religion which is most of the GOP, cherry pick without any regard to the actual religion. This is explaining the law.

The government is separation of church and state.
You have NO right to delegate to me.

Makes sense for teachers to follow the law as you all wrote it. 🤷‍♀️

You helped pass the "Don't say gay" law. The teachers are just covering their behinds from lawsuits. https://t.co/vMSvPZaqh4

It seems a pretty straightforward and reasonable response to massive political overreach.

Update: The Palm Beach Post found that the letter was not written by Florida teachers with the intent of sending it home with students, but was taken from a satirical article written by a teacher in Michigan.

Lauren Boebert wants to ban people from coming out before 21