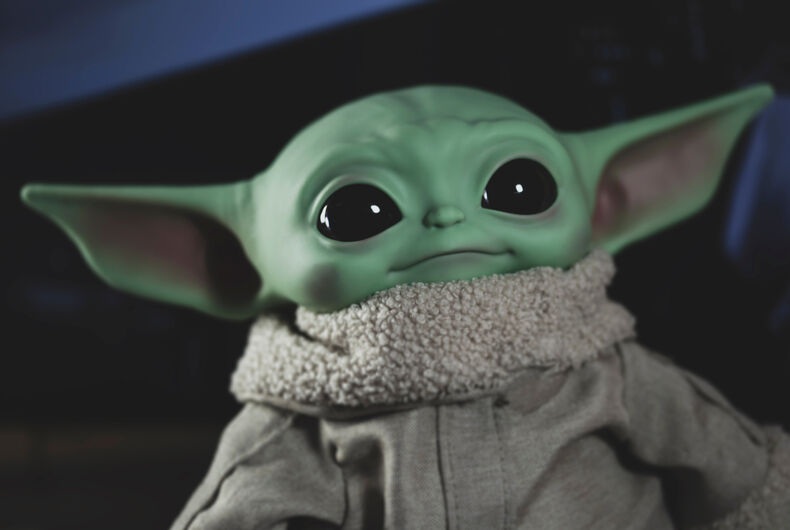 Grogu doesn't need the Force to see that evil never wins in the end.Photo: Shutterstock

Once upon a time, in December, I celebrated my beautiful, joyful, queer love with a wedding reception on Disney World property. As an LGBTQ person, I have always been treated well by Disney staff and guests, and the same was true at my wedding and the next day when my spouse and I went to the parks dressed just like all of the straight couples: wearing matching couple shirts, Mickey wedding ears, and Disney-provided “Just Married” pins. The staff and guests (with a few exceptions who assumed I was marrying my gay best man) all congratulated us and wished us well, and numerous LGBTQ staff shared their identities with us in solidarity.

For 99 years–next year is Disney’s centennial–Disney fairytales have given us countless stories of happily ever after. But the happy endings never happen until the battle in which love triumphs over hate.

My fairy tale wedding was possible thanks to generations of LGBTQ people who suffered hate, including the lives taken at the Pulse Nightclub in Orlando, and relentlessly fought for rights, and against discrimination.

Today, Disney’s latest villain is Gov. Ron DeSantis (R), who is waging a war of petty revenge against one of America’s biggest cultural institutions, its employees, and the surrounding residents. His hatred towards LGBTQ people runs so deep that he actually thinks he will be able to run a cultural icon like Disney–and all of its properties–and its LGBTQ workers and Florida LGBTQ communities out of town.

That’s not to say Disney is without blame though. For years, Disney has lavished right-wing Republicans in Florida with political donations that supported their campaigns. In fact, research from UltraViolet, a national gender justice organization where I work, has found that Disney was the third-largest contributor to elected officials in Florida who support the State’s 15-week abortion ban, HB 5.

Many of these same politicians have been behind Florida’s “Don’t Say Gay” law and efforts to limit voter participation in the upcoming election. According to UltraViolet’s analysis, 69% of Disney’s political donations in Florida went to anti-abortion, anti-LGBTQ, and anti-voting rights lawmakers, totaling $166,100 in contributions. While Disney has paused all of its political contributions in the state, for years the company prioritized donations to politicians who promised to protect its tax breaks, instead of politicians aligned with the values that Disney, and its customers, prioritize.

Let’s start with this rollback of “special districts,” which DeSantis wanted so badly he required a special legislative session to push it through. When Disney World was founded, the surrounding area was a large, empty swamp and this Reedy Creek Improvement District, eventually renamed Lake Buena Vista, allowed Disney to be responsible for its own water, roads, and power. It’s actually a good thing for Floridians because it means that Disney World pays for and manages its own municipal services.

If this responsibility reverts back to the two surrounding counties, taxpayers would take on $1 billion dollars in debt, as well as any future costs. While such a bill isn’t a big deal for a company that owns over $200 billion in assets, individual taxpayers would feel the pain. Fortunately, even though DeSantis signed the bill, it still requires homeowners in the area to vote and approve it. Given that this will cost each household roughly $2200 that seems unlikely and surely DeSantis knows this.

DeSantis is also delusional if he thinks that he can erase LGBTQ people from our rich history in the state. Long before colonizers came to Florida, the Seminole and Miccosukee lived in what is now Orlando and had a nuanced and expansive view of gender and sexuality.

They embraced the view that some people “embody ‘two spirits’ or ‘two energies’” and, according to Rev. Houston R Cypress, a Two-Spirit activist from the Otter Clan of the Miccosukee Tribe of Florida, “these community members were quite often imbued with abilities to walk in between worlds…both male and female worlds, could “see” from multiple points of view and communicate fluidly between the living and the spirit world.”

Disney itself would not be as successful today without the creativity and leadership of LGBTQ people. In fact, most of Disney’s biggest hits were composed by LGBTQ musicians, including Elton John and Howard Ashman.

When Ashman revealed his HIV status to Disney, they supported him, setting up a work environment that made it easier for him to access treatments and dedicating Beauty and the Beast to him after he passed.  Ashman’s square on the AIDS quilt has the lyrics he wrote for Beauty and the Beast.

Finally, we cannot talk about Orlando and the LGBTQ community without acknowledging the Pulse nightclub massacre that left 49 young queer BIPOC people dead and many others traumatized. DeSantis may have moved on from this tragedy – he even vetoed a bill last year that would have provided $150,000 for mental health services for victims and their families despite vowing to always support the survivors. But the city of Orlando and its LGBTQ community certainly hasn’t.

Pulse still stands as a living memorial, with a museum in the works. And it is no coincidence that there are now many businesses in Orlando, including Disney, that proudly sport pride flags or other signs noting that they support and welcome our community.

These histories deserve to be taught, mourned, and celebrated, but DeSantis is trying to erase them. In doing so, he is trying to deny LGBTQ children and their parents their history, their humanity, and their very existence. That will only lead to an increase in depression, anxiety, bullying, discrimination, suicide, and homelessness among LGBTQ youth and families.

DeSantis may think that he is winning by passing the “Don’t Say Gay” bill, spreading hate, and forcing Orange and Osceola counties to take on Disney’s debt. But if there’s one thing Disney taught me it’s that evil never wins in the end.

Floridians have an opportunity to vote down this tax increase, to vote out the legislators who voted in favor of the “Don’t Say Gay” bill and to vote out DeSantis this fall.

At my Orlando wedding ceremony in December, there was a funny and well-meaning moment when our officiant asked guests to celebrate the fact that “the LGBT are here in Florida.” I’m pretty sure she meant that we had the right to legally marry in Florida, but it gave all of our queer guests a good laugh.

It would behoove DeSantis to remember that you can’t just say away the gay, because the LGBTQ are, in fact, in Florida whether he likes it or not.

Katie Reilly is a campaign director with the gender justice organization UltraViolet.

Drunken homophobe attacked a flight attendant mid-flight. He could get locked up for 20 years.