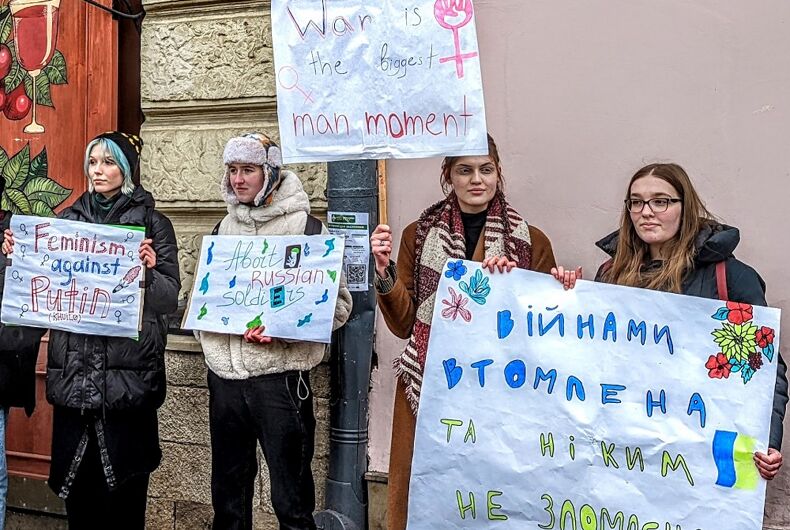 Olena Shevchencko, a well known activist and the founder of Ukrainian LGBTQ group Insight, was attacked with pepper spray in the western city of Lviv today. Prominent Ukraine journalist Katerina Sergatskova suggested may be an act of hate by a Russian saboteur.

According to multiple reports, the assailant walked up to her, offered a quick hello, and then unleashed his assault.

Related: What it’s like being a transgender journalist in Ukraine

Insight, which touts itself as being a “public organization whose main values ​​are equality, feminism, freedom, inclusiveness, diversity for all social groups,” has provided invaluable assistance to minority communities across Ukraine during the ongoing war.

Shevchencko herself described the group she leads as follows, “The struggle for LGBTQI* rights is directly related to women’s rights. We have a feminist structure, and even now there are no male cisgenders on our team. Insight includes transgender men and women, and most of the cisgender women are lesbian or bisexual. We use the same approach in regional offices where not a single senior position is held by a cisgender man.”

Most recently the organization was lauded by Kyiv Pride, who’s director was highlighted in LGBTQ Nation last month, and has recently been featured in several international news articles.

Lviv, the city where Shevchencko was ambushed, is a metropolitan area bordering Poland and a central location for the war’s Ukrainian victims including refugees and internally displaced peoples.

LGBTQ Nation has reached out to both Insight and Kyiv Pride for comment.

This story is developing.

LGBTQ Fox employees are angry their company has become so homophobic