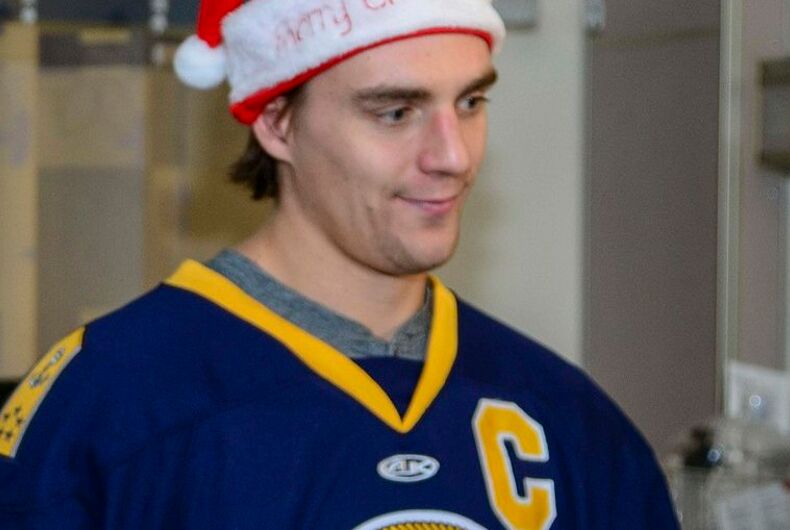 The 34-year-old player was heard using anti-gay language against Comets forward Chase De Leo at the end of the first period in their March 30 game. The exact language Holmstrom used is unclear, but his team’s general manager, Jason Karmonos, acknowledged the incident in a statement.

“We were made aware of an inappropriate comment made by one of our players in a recent game. Once aware, we took immediate action through numerous conversations with the player, team, and league,” Karmonos wrote. “To be clear, we have no tolerance for any form of hate and regret any harm his comment inflicted. We strive to maintain an inclusive environment in which our differences are celebrated. We have sought counseling and awareness resources for the player.”

The “awareness resources” will include “diversity and inclusion education” for Holmstrom, the AHL wrote in a statement.

“Hrabik got 30 games for a racist gesture. Holmstrom gets eight games for a homophobic slur,” wrote Twitter user @SeanOBrien81. “Not exactly holding everyone to the same standard, are we? To be clear, Holmstrom should not be getting a significantly lighter suspension here.”

Holmstrom gets 8 games for a homophobic slur.

Not exactly holding everyone to the same standard, are we?

To be clear, Holmstrom should not be getting a significantly lighter suspension here. https://t.co/U9CJz6ZxFA

Holmstrom has already sat out from five games, according to the Los Angeles Blade. He will remain suspended from the ice until April 19, when the Americans face the Springfield Thunderbirds.

A 2021 study of LGBTQ athletes found that 70 percent of 820 out queer student-athletes had heard anti-LGBTQ language from teammates before coming out. However, the same study found that 82 percent reported positive experiences after coming out, including acceptance and support from their teammates.

As such, the study suggests that sports teams may actually be accepting of LGBTQ players, even if their teammates have used anti-queer language.

In July 2021, the Nashville Predators defenseman Luke Prokop made history by becoming the first active National Hockey League (NHL) player to come out as gay. While that’s a big deal for a major league, he’s definitely in the minority.

In fact, throughout history, there have only been a very small group of U.S. male athletes who have come out while still playing in pro-sports.

Until the AHL and NHL do more to embrace such players, sports fans won’t likely see many queer athletes on the ice.