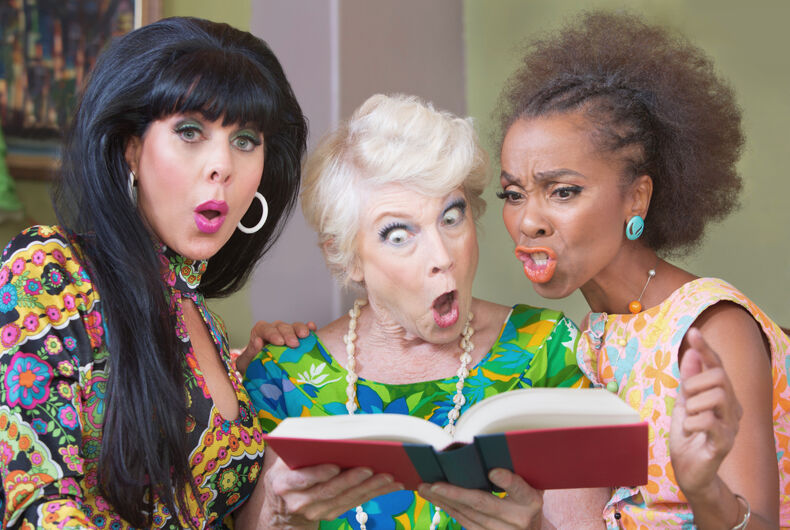 A public library in Enid, Oklahoma pulled down a display dedicated to the LGBTQ community because of vitriolic condemnation by right-wing Christians. During a special meeting session on April 11, the Board of Directors of the Public Library of Enid and Garfield County decided to ban the display providing LGBTQ representation after pushback from Christian conservatives.

But the result is not what the board expected now that a group for older women who read romance novels and a sexual assault support group has also been banned under the board’s new guidelines about “sexual activity.”

A group known as the Enid Freedom Fighters petitioned the board to ban a display of books, over claims that it was “promoting LGBTQ activity”, as one member stated.

The Enid Freedom Fighters was founded by Melissa Crabtree, who was picked to be Oklahoma Gov. Kevin Stitt’s (R) Secretary of Education before it was rescinded due to her promotion of multiple conspiracy theories and misinformation related to the COVID-19 vaccine, including the debunked theory that zinc could stop the coronavirus from spreading.

The board passed two proposals, the first including a provision that stipulated that “exhibits shall not promote books or displays that make as their primary subject the study of sex, sexual activity, sexual perversion, sex-based classifications, sexual preferences, sexual identity, gender identity, or that are of a sexual nature.” The second provision included verbiage that echoes the “Parents’ Rights” movement, stating that the library does not act in loco parentis and that it is the responsibility of parents/guardians to determine which library programs are appropriate for their child.

The library replied to the claims, stating that it was never promoting any one ideology. It was only about showing that there are LGBTQ books if anyone wants to read one.

The list of books banned included LGBTQ Families: The Ultimate Teen Guide by Eve Apelquist; Confronting LGBTQ+ Discrimination; I Wish You All the Best by Mason Deaver; and Aristotle and Dante Discover the Secrets of the Universe by Benjamin Alire Sáenz, among others.

This LGBTQ exhibit had been a topic of debate for over a year in Enid. In June 2021, Christian conservatives previously attempted to remove the exhibit from the library but were unsuccessful. One member of the group objected to what she called the display’s “anti-Christian message,” saying that the display did not value those in Enid who believe the LGBTQ “lifestyle” is a “sin against our God.”

The display was intended to commemorate Pride Month, similar to displays the library has done for other commemorative months like Women’s History, Black History and American Indian Heritage months. The American Library Association (ALA) recognizes June as Rainbow Book Month, a nationwide celebration initiative of LGBTQ authors and literature, providing library workers with tools, publicity materials, and several lists of books for both children and adults.

This ban on LGBTQ books follows suit with the Don’t Say Gay bills being pushed by Republican-controlled legislatures in the United States. From fearmongering of LGBTQ people “grooming” kids to bans on LGBTQ literature, the Christian Right is using the 2022 midterms as a means of rolling back the hard-earned rights of queer people in America. It is evident that the Parents’ Rights movement is nothing more than a tool used to promulgate Christian nationalist ideology, all as an attempt by the Christian Right to reinstate a new Lavender Scare.

This week, the library cancelled a sexual assault awareness program and display, as well as a new romance novel discussion club, according to a post on the library’s Facebook page Friday. The cancellations were issued following the passage of the board’s first provision banning books or displays of a “sexual nature.”

Due to bans on sexual content in presentations by public entities, the bodice rippers book club enjoyed mostly by older ladies in the community is now canceled.

“The Sexual Assault Awareness program/display and the Shameless Romance book club discussion have been canceled.  Displays or programs that focus on sexual content are not allowed at the library.  The library respects the authority of the library board to set library policies,” the statement reads. “Community members who would like to be heard on the subject of library board policies are encouraged to contact the library board, city council or the mayor.”

The board had agreed that the two programs, to be held later this month, would be unofficially exempt from the policy, but city manager Jerald Gilbert said library staff had reconsidered after the meeting. The review voted to ban the two groups, with a 3-2 decision in favor of the ban.

It appears that libraries are pushing back against bans on books.