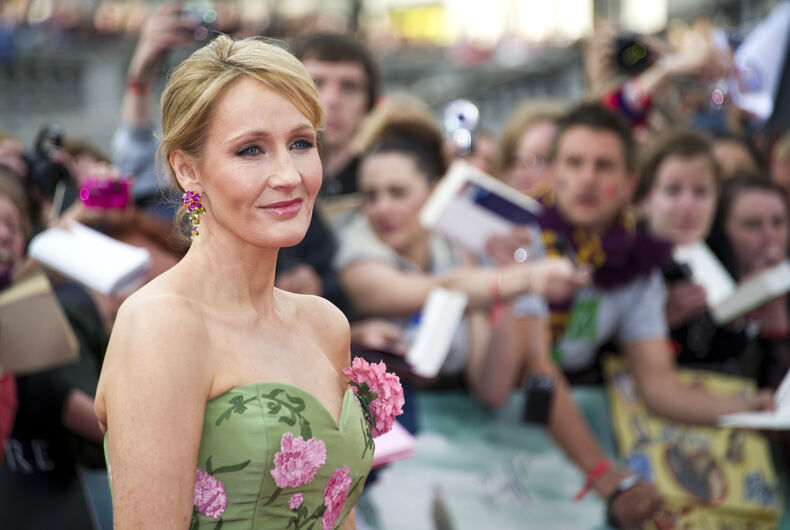 The new movie in J.K. Rowling’s Harry Potter spinoff series, Fantastic Beasts: The Secrets of Dumbledore, had the worst opening weekend in the franchise’s history. The movie had a strong showing in China, where lines that mention Dumbledore’s relationship with the wizard Grindelwald were censored.

The series has been plagued with controversy, including the author’s ongoing attacks on transgender women, former star Johnny Depp’s domestic violence allegations, and actor Ezra Miller’s arrest in Hawaii during a reported drug and alcohol-fueled meltdown.

Fantastic Beasts and Where to Find Them was a 2016 prequel to the enormously popular Harry Potter series, based on Rowling’s 2001 book by the same name.

Miller, who plays Credence Barebone, was arrested at a Hawaii bar where they allegedly shouted obscenities, attacked a man playing darts, and grabbed a mic from a woman singing karaoke because they didn’t like her choice of Lady Gaga song. And in April 2020, a time when a large part of the world was in lockdown, video surfaced of Miller that appeared to show them choking a woman at a bar in Iceland. It is not clear if it was a joke, but they threw the woman to the ground and the person recording them said, “Woah, bro. Bro,” and stopped filming.

Depp was fired from the role of Grindelwald after allegations of spousal abuse. He has denied the claim.

But Rowling’s attacks on transgender people have overshadowed the movie, putting the fate of the rest of the franchise in jeopardy. Warner Brothers has not started work on the fourth and fifth films in the series and has not announced any release dates.

When the spinoff series launched in 2016, Rowling was still known mainly as the author of one of the most beloved series of books in the world. While there was some evidence that she did not like the existence of transgender people, it wasn’t until late 2019 that she ended all doubt and tweeted support for an anti-transgender activist.

And the backlash has made Rowling camera-shy. While she appeared at the world premiere for The Secrets of Dumbledore, she refused to talk to journalists or take pictures on the red carpet with the cast. She hasn’t been talking to the media or even posting much on social media – it doesn’t appear that she has mentioned the global premiere of the film to her 14 million Twitter followers, despite repeatedly posting about a lunch with anti-transgender activists – which contrasts with how she helped promote previous films based on her books.

Warner Bros. itself has not denounced Rowling, nor has it supported her beliefs publicly. The majority of the stars of the Harry Potter series have condemned the author’s attacks on transgender people.

The movie brought in only $43 million domestically on opening weekend with another $193 million overseas to date. It cost $200 million to produce without the associated costs of publicity, distribution and promotion that generally rack up millions more.

Fantastic Beasts and Where to Find Them opened with a domestic haul of $74 million and ended with $814 million globally.

Is “no homo” homophobic?