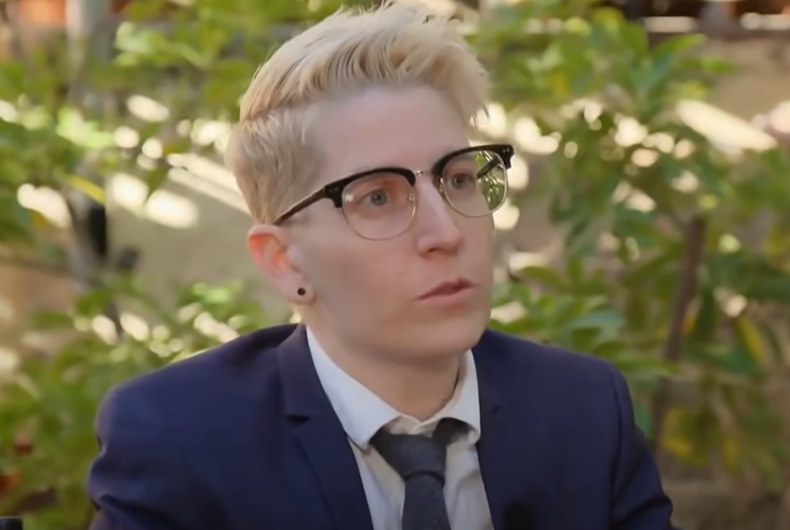 Kate Sosin, a trans reporter for The 19th News, was misgendered in an MSNBC segment on the gender-based harassment experienced by journalists online.Photo: Screenshot

In a news segment about gender-based harassment experienced by reporters online, MSNBC misgendered trans journalist Kate Sosin. As a result, Sosin says they have experienced an increase in online harassment and misgendering from other news outlets.

The error remained uncorrected as of April 6. Sosin, who covers LGBTQ issues for nonprofit outlet The 19th, was interviewed alongside Washington Post columnist Taylor Lorenz for an April 1 story on “Meet the Press.” Host Chuck Todd contextualized the segment by noting the White House recently joined the launch of the Global Partnership for Action on Gender-Based Violence and Abuse.

According to a White House press release, 1 in 3 women under age 35 – and more than half of LGBTQ individuals – have been sexually harassed online. Recent data from the International Center for Journalists affirms that reporting on transgender issues is often a “trigger topic” for harassment. But the interview never addressed harassment against LGBTQ journalists like Sosin.

The interview with MSNBC correspondent Morgan Radford was focused on women in journalism, despite the fact that Sosin is not a woman. The segment repeatedly referred to “female journalists” and made no mention of the even higher rates of online harassment experienced by LGBTQ people. Radford did not respond to a request for comment in time for publication.

The segment primarily focused on Lorenz, whose experiences were a primary subject of a recent analysis by the Brookings Institute, NYU’s Center for Social Media and Politics, and the International Women’s Media Foundation. But Sosin, who appears in and is quoted in the piece, says that the reporters sat for a two-hour interview.

The interview, which focused on the most salacious aspects of Lorenz’s experience, did not explore the types of stories the harassment is preventing journalists from covering.

Sosin spoke out about the error yesterday on Twitter, noting that MSNBC had yet to correct the mistake despite outreach from their employer.

I really did not want to get into this, but I don't know what to do. It's been five days since @MSNBC pubbed this piece on gender-based harassed facing journalists and misgendered me.

Sosin not only took issue with being so carelessly misgendered, but also with the segment’s lack of context.

“The clip is essentially Taylor sobbing, without any context on the violence online and often in-person that journalists who do this work, especially Taylor, have faced,” Sosin explained on Twitter. They added, “The result is that Taylor has faced a flood of new harassment and I have been misgendered by news outlets across the world.”

Many have responded by tweeting at MSNBC to correct the error. But others are harassing Sosin as if they were to blame.

My dude have you considered trying out a name a little more butch than Kate? I’m a CIS dude Robin and it’s sometimes a hazard, but not a real problem for me. I can see why this hurts you, and it sucks, but maybe give Dave or something a try?

Sosin is asking that MSNBC stop identifying them as a female journalist in the text and audio, and clarify that they are trans.

I want it to, at a minimum, stop identifying me as a female journalist in the chyron and the audio and note that I am trans!

It is unclear how the mistake was made, given that Sosin’s pronouns and trans identity are clearly indicated in their Twitter profile and elsewhere online.